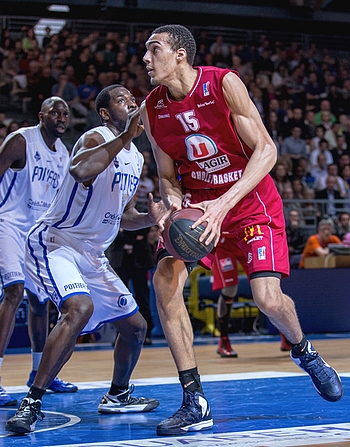 After playing just 14 minutes per game in 2011-2012, Rudy Gobert saw his minutes increase to 23 per game in 2012-2013, being followed heavily by NBA scouts and executives in virtually every game he played in Pro A France.

With Turkish coach Erman Kunter leaving for Euroleague team Besiktas, Cholet turned to longtime Le Havre coach Jean Manuel Sousa this season, finding mixed results and disappointingly missing on the playoffs for just the second time in the past 12 years.

Gobert continues to gradually fill out his frame, but is still a long ways away from reaching his full potential physically. While his upper body is looking better, he's very lean in his lower body, showing very skinny legs that affect him on both ends of the court at the moment. He gets pushed around quite a bit and loses his balance fairly easily, spending a decent amount of time sprawled out on the floor.

Gobert is a relatively mobile big man, quick off his feet, and exceptionally long. His 7-8 ½ wingspan is one of the longest ever measured in our extensive database, as is his outrageous 9-7 standing reach. He's not an off the charts athlete, though, as he looks somewhat heavy running the floor at times and is not terribly explosive in terms of his sheer leaping ability. He tested out fairly poorly at the NBA Combine in a number of different categories, even if it's difficult to gauge exactly how he compares to his American peers in these tests as it was likely his first time encountering them. He does not appear to be anywhere near as athletic as the likes of physical specimens such as DeAndre Jordan or Javale McGee.

Offensively, Gobert was not a very prolific option for Cholet this season, being responsible for just 9.3% of their total offensive possessions and scoring 14.7 points per-40 minutes, but being incredibly efficient in the looks he did receive. He made an outrageous 74% of his 2-point attempts this season, with most of his offense coming as a pick and roll finisher, off cuts, offensive rebounds and transition opportunities.

Gobert has incredibly soft hands, which in addition to his phenomenal wingspan give his guards an incredibly large radius they can throw the ball to around the basket. He catches virtually anything thrown his way, making him a terrific target for lobs, which helps explain his excellent efficiency. He's solid on the offensive glass, pulling down 3.7 offensive rebounds per-40, which ranked among the top-15 players in Pro A. In addition to that, he also converts his free throw attempts at a decent clip (70%), which is surely a good sign for the future.

On the downside, Gobert is a fairly limited player if unable to simply catch and finish around the basket. He doesn't show a very high skill-level with his back to the basket, not having the lower body strength needed to establish great position inside or a terribly diverse arsenal of footwork or post moves he can go to when his initial move is cut off. His lack of strength, balance and toughness makes it difficult for him to finish through contact in traffic, and he needs to continue to improve his left hand.

Outside of the paint, Gobert hasn't shown any real semblance of a jump-shot at this stage, and didn't look to be on the verge of developing one from what we saw in the drills of the NBA Combine in Chicago. He's generally not a great passer or decision maker with the ball in his hands either, but some of his struggles offensively may have been exacerbated by how disorganized his team looked in many stretches this season, as his coach did not always seem to put him in a position to fully play up to his very unique strengths.

Where Gobert really shines is on the defensive end, showing the potential to be an absolute game-changer with his terrific combination of size, length and instincts. He changes everything inside the paint and is near impossible to shoot over both in man to man defender and rotating over the weakside, ranking #1 in Pro A France both this season and last in blocks per-40, as well as per game. 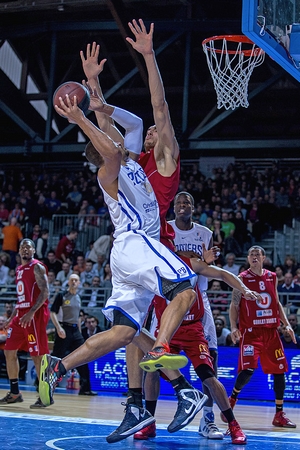 While not incredibly fast, Gobert also does a surprisingly good job as a pick and roll defender, being capable of hedging out hard on the perimeter with solid timing, and then rotating back into the paint. His length is absolutely smothering on traps, and he shows quick hands getting in the passing lanes, coming up with a decent amount of steals poking the ball away from opponents.

Gobert's lack of strength does affect him here too, though, as he gets moved around rather easily inside the paint, not always being able to hold his ground. He lacks some intensity and toughness on this end of the floor, sometimes allowing himself to get pushed around inside and not offering enough resistance. His high center of gravity and average balance makes it difficult for him to bend his knees and stay in front of opposing slashers attacking him off the dribble.

Just an average rebounder on the defensive end, Gobert shows solid timing boxing out his man, but tends to get pushed around and lets smaller opponents wrestle rebounds away from him. His 5.7 defensive rebounds per-40 is a fairly pedestrian rate and something he'll have to improve on to see minutes in the NBA.

While Gobert is a little older than you might hope considering the stage of development he's currently at both physically and skill-wise, turning 21 the day before this year's NBA Draft, there's little doubt that he's a prospect with significant upside still. If a NBA team feels he has the potential to put on significant weight in the next few years they could pick him very high on draft night, as players with his potential defensively can be game-changers in today's NBA and are extremely difficult to come by. The fact that he shows a solid work ethic and appears very much committed to making a career in the NBA has to be viewed as a major plus.
Read full article

DraftExpress
@DraftExpress
The star of the measurements portion of this event, as we documented on twitter yesterday, Rudy Gobert put his 7'9 wingspan to good use today. He shut down the paint against the U20 Russian team, finishing with 15 points on 7-8 shooting, 3 rebounds, and 4 steals while providing an incredible defensive presence in 30 minutes of action.

Finishing a number of lobs from masterful floor general Leo Westermann (more on him tomorrow) and staying active in the passing lanes, Gobert made the most of his terrific physical profile, a big part of why he is among the top international prospects who could factor into either the 2013 or 2014 draft. Possessing impressive mobility for a player standing over 7 feet tall, Gobert's athleticism and impact on both ends of the floor is unmatched in their year's field.

A 1992-born prospect who won't turn 20 until a few days before the upcoming draft, Gobert got his first significant taste of high-level competition this season, playing rotation minutes for Cholet in France. He shot almost 80% from the field in Pro A, while showing impressive potential as a rebounder and shot blocker. The progress he's made since last season is extremely promising, and he's maturing at a terrific rate.

The French big man still has a significant amount of work to do to fill out his 231-pound frame, will need to polish his offensive skills, and has to cut down on his foul-rate to keep himself on the floor, but the future is extremely bright for the young center. He's a player we'll be covering in significant detail this coming year, as he has all the talent to demand consideration for lottery status in the 2013 NBA draft.