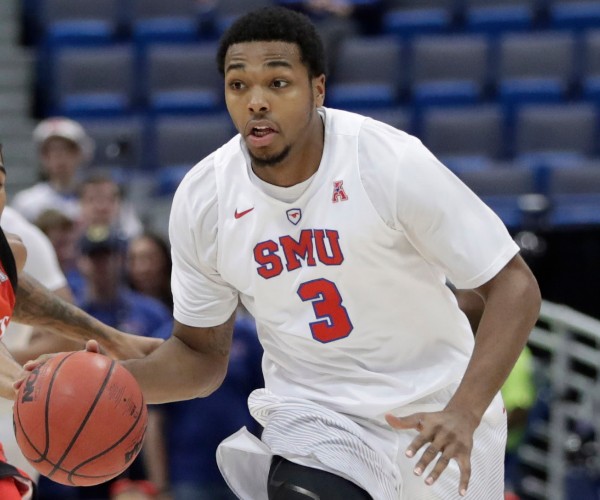 The brother of former first round draft pick and nine-year NBA player Shannon Brown, Sterling Brown didn't hit his stride until his junior season. A part-time starter in his first two seasons at SMU, Sterling caught the eye of analytics mavens by shooting 54% from two and 45% from three as a two-way role player for the Mustangs over his four year career. The Maywood, Illinois native is coming off a strong senior campaign, averaging 16.4 points, 7.9 rebounds and 3.7 assists per 40 minutes while knocking down 44.9% of his three-point attempts, right on par with his career average (284 attempts). Brown's productive senior season on an accomplished SMU team earned him a spot on the AAC All-Conference Second Team and an invitation to the Portsmouth Invitational Tournament.

The PIT was Brown's first opportunity to prove himself in front of NBA scouts outside of the college confines, as he wasn't invited to highly-attended summer showcases like Adidas Nations or Nike Academy. Despite NBA measurements and a solid all-around PIT performance - 16.6 points, 8.8 rebounds, 5.9 assists, 2.9 steals and 1.0 blocks per 40 minutes - Brown wasn't invited to the NBA Draft Combine in Chicago, a surprise given his performance and status as a sleeper' among many scouts and executives.

Regardless of the Combine snub, Brown has certainly helped himself throughout the pre-draft process, and projects as a 3 and D style wing prospect thanks to his strong 225-pound frame,  near-6'10 wingspan and smooth shooting stroke. While more of a wing, Brown, behind a rugged frame and excellent length, has the tools (and toughness) to play either forward spot in bench units. He's not the most explosive athlete, but his strength will allow him to play multiple positions on both ends of the floor.

Brown's most NBA translatable skill resides on the defensive end, where he's physical, tough-minded, and quick-footed for his body type. Given his measurements, Brown has the potential to guard a couple of different positions - he has excellent footwork on the perimeter to help him stay in front of quicker players, and isn't afraid to play physical with bigger players in the paint.

Brown regularly checked the opponent's best player and showcased that defensive intensity at the PIT as well. Known as an intense competitor by those around him, Brown is also an aggressive defensive rebounder, as he tracked down 6.0 defensive rebounds per 40 minutes as a senior. He is willing to put a body on his man to box out and crashes the glass from the perimeter to rebound in a crowd, which should help him steal minutes as a small-ball power forward for a forward-thinking coach. Brown's defensive toughness, tools and experience as a defense-first player at SMU bode well for his willingness to step in and guard at the NBA level.

On the other side of the ball, the majority of Brown's offensive intrigue revolves around his perimeter shooting. Having attempted no more than 2.7 threes per 40 minutes in any one of his first three seasons, Brown hoisted 4.8 triples per 40 minutes as a senior and converted at an impressive 45%, the third-best clip among players in the DraftExpress Top 100 (30 attempt minimum). He has compact and consistent mechanics on his jumper and a high release point that allows him to get his shot off against bigger defenders. He is most comfortable on catch and shoot opportunities, as he made 47% of his 93 attempts last season according to Synergy Sports Technology. Brown has shown he's comfortable stepping into one or two-dribble pull ups if run off the line, and has made strides getting to pull ups off of hang dribbles, particularly after pick and roll switches.

Brown, more powerful than explosive, does have some limitations as a slasher, however, and isn't a very natural scorer overall - career 12.7 points per 40 minutes. He's primarily a straight line driver who has an average first step, a basic handle, limited wiggle, and plays below the rim as a finisher (49.3% at the rim). He lacks pop in the paint and doesn't quite have the footwork or finesse to make up for it when faced with NBA size and length. Brown also converted only 46.5% of his two point attempts as a senior, speaking to some of his limitations as a slasher.

The 22-year old wing has a tendency to hunt for his jump shot off the dribble more than getting to the rim, likely due to his struggles getting all the way to the basket in shot creation situations. Although pick and roll and isolations made up a combined 23.8% of his offense, Brown is unlikely to operate as much more than a catch and shoot, closeout attacking, ball mover at the NBA level - all things he can do at a solid rate.

It does remain to be seen how dynamic of a shooter Brown can be at the NBA level, however, as he's always been at his best with time and space. He's improved off the dribble, but he's not a player who particularly shines at sprinting off screens, creating space with step backs, or rising and firing with a defender shading him. Brown will have to adjust to the NBA line as well, but his stellar percentage on an increased volume is certainly a welcoming sign.

Brown's ability to move the ball and stay in his lane offensively also bode well for his role player potential. He registered 3.7 assists per 40 minutes as a senior and was more or less a defender, spot shooter, and cutter for the better part of his four years at SMU, averaging only 9.4 field goal attempts per 40 minutes on his career. He does have his turnover prone moments when asked to do too much in the half court, and we saw more contested jumpers this year than we did earlier in his career, but his ability to play efficient basketball within a succinct role certainly isn't a question NBA scouts have moving forward.

With clear 3 and D potential, Brown's physical tools, shooting stroke, defensive toughness and experience as a role player make him an intriguing second-round option, especially as one of the younger seniors in the draft. The NBA is always searching for wings with size and length who can make a shot and play the right way, and Brown fits the bill.
Read full article

Matt Williams
@DraftExpress
-Sterling Brown -Sterling Brown had an up and down performance at the PIT, but remains an intriguing prospect for NBA teams due to his 3'n'D potential and solid physical tools. His 225 pound frame, and 6'9 ½ wingspan are comparable marks to the likes of Solomon Hill, Jaylen Brown, Justise Winslow and T.J. Warren, and should allow him to play some power forward, similar to what those players do in the NBA.
Read full article