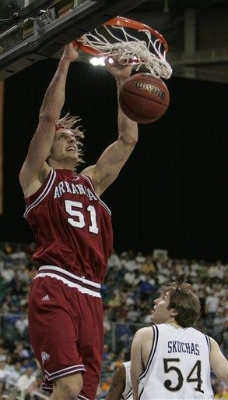 Joey Whelan
@DraftExpress
So much of the NBA draft is about selecting players based on potential, which is why Steven Hill is likely to get some looks from scouts. The seniors three seasons at Arkansas have not been what one would call impressive, at least in the offensive sense. Last season Hill averaged 6.2 points and 4.4 rebounds in 23.5 minutes of action. This is not the kind of production you want to see from a legit 7-footer at the college level, but Hill has shown that he is a work in progress, and that he could be primed for a breakout season this year.

Size is not an issue for Hill, whose body is certainly big enough for life in the post at the next level. He does need to add some bulk to his frame though to withstand the pounding he will take. At 250 pounds, Hill is very lanky, and though he has shown to be a strong player inside, he will get pushed around too easily in the NBA.

Hill shot better than 64% from the field last season, but that was mainly due to the fact that he only attempted four shots per game, and the majority of his points came off of dunks and put backs. His post game is very underdeveloped, but one can see that he is starting to develop. Hills go to move is a strong dribble to the middle and then drop stepping back to the baseline side and going up with a left-handed (he is a lefty) baby hook. While he is very good at getting position on the block and holding it, Hill gets into trouble because he often shoots before he is square to the basket, and due to his lack of a right hand. When that left-handed shot is taken away from him, he often turns the ball over or is forced into an awkward shot.

Despite his shortcomings in the post, Hill moves exceptionally well for a big guy without the basketball. He has good open floor speed and is a great trailer on the break, often flying down the paint for a thunderous dunk. In the half court set, Hill is surprisingly good at slipping behind the defense; he picked up a high number of alley-oops last season thanks to his innate ability to find open spaces around the basket. He certainly isnt a threat to spread the defense though. Hills game is inside the paint; he hasnt shown that he can step outside and shoot or really put the ball on the floor much.

Where Hill has excelled is defense. His length and anticipation make him a great shot blocker, having averaged nearly three a game in each of his last two seasons. He does a fairly good job at staying on his feet, and holds his position well. He struggles a little against smaller, quicker post players who can beat him off the dribble or with a spin move. Where Hill has to improve is his rebounding. He has never averaged better than 4.4 rebounds per game, which is unacceptable for a player his size. Improving his leaping ability would certainly help, as would again, adding some weight to his frame.

There is still a tremendous amount of work to be done before Hill can be called a legitimate pro prospect. He does have the type of physical attributes that cant be taught, though, and that will put him in the mix for Portsmouth, the NBA pre-draft camp, private workouts and more because of how rare his combination of size and athleticism is. Defensively Hill is already on his way, if he can put together a strong showing on the offensive side of the floor this season, he could start to hear his name cropping up as a second round pick.
Read full article