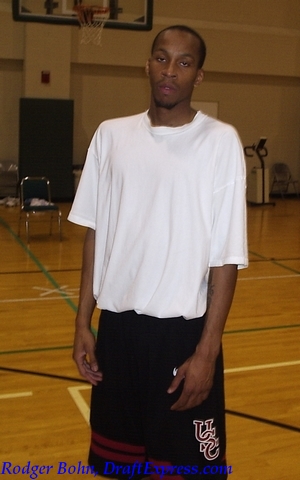 Jonathan Givony
@DraftExpress
After spending the entire 2008/2009 NBA season with the Cleveland Cavaliers, averaging just under 6 minutes per game in 50 contests, Tarence Kinsey decided to head back to Turkey where he found a lot of success in 07/08 with Fenerbahce Ulker once he was cut by the Cavs in training camp. With over 100 NBA games under his belt (at 12 minutes per) he obviously wont need any time to transition into a new role, and still has the upside of being a 25-year old wing with size and athleticism who had eight 20-point games in the span of one month while playing for the Memphis Grizzlies as a rookie in 06/07.

Defensively, Kinsey has an average wingspan and is not particularly strong, but regardless finds ways to be effective thanks to his athleticism and the effort he usually brings to the table. He gets in the passing lanes at a nice rate and can put solid pressure on the ball, but tends to lose focus at times and not play with great consistency, a problem that can be reflected on both ends of the court. Regardless, Kinsey is still only 25 and may not have reached his peak at this point, particularly if he can find a way to put more bulk on his frame.
Read full article

Rodger Bohn
@DraftExpress
Kinsey is a player who really burst on the scene this year after having a pretty average college career until his senior season. He nearly doubled his scoring average from his junior to senior year, going from 8.9 to 15.8 points per game. As a senior, the lanky guard led the Gamecocks to the NIT championship and turned himself into a guy that was invited to Portsmouth and will be working out for numerous NBA teams over the next month.

Kinsey is the type of player who looks much better in a five on five setting then in an individual workout. His basketball IQ, leadership, and other intangibles were impossible to gauge in a workout setting like this. The Gamecock senior showed off good ball-handling skills for a wing, and was downright automatic from mid-range. While his form was a little bit awkward, he really got into the shooting motion quickly and shot an extremely high percentage throughout the drills. What was most impressive was how fast Tarence came off screens, leading Bob Donewald to call him a Poor mans Richard Hamilton. Kinsey indeed has the body and style of play similar to that of the Pistons star guard. Athletically however, the South Carolina star possesses leaping ability that Rip can only dream of, as he threw down windmill dunk after windmill dunk with ease. Kinsey was dunking so hard in fact that I thought he was going to hurt his arm on the rim from dunking with such ferocity and power.

The biggest knocks on Tarence are his small frame and inconsistent three point shot. Although he has pretty narrow shoulders, one could still imagine Kinsey being able to add more strength and weight before he beings playing professionally. In terms of his outside shot, we were unable to see him shoot the deep ball much because of the nature of the workouts, so we cant comment one way or another.

NBA teams are surely going to be calling Mr. Kinsey in for plenty of workouts in the month and a half leading up to the draft. His productivity this past year at South Carolina in combination with his prototypical size for a SG makes him the type of player teams will want to look at. While it appears that Tarence is on the outside looking in right now, mainly due to his very average showing at Portsmouth, he is the type of player who has the potential to make a roster as an unsigned free agent if placed in the right situation.

I was shocked. When you first take a look at him, you say hes a little skinny, but weve had him in these workouts and weve had him playing. His size and body have not bothered him. Hes got some core strength to him. Hes an exceptional athlete. His jumping abilityWe saw some highlight reel stuff today. Hes a good shooter. His shot coming off screens is fairly quick now. His footwork is cleaned up. Hes going to be an interesting prospect. I could definitely see him on somebodys roster next year. Again, Im not a guy who knows the draft. I know there are a ton of teams bringing him in for workouts looking at him probably in that second round. And if not, I could definitely see him sticking to a roster by the way he plays on both ends of the floor. I think hes a mini Rip Hamilton, and I think thats who hes going to develop into.
Read full article