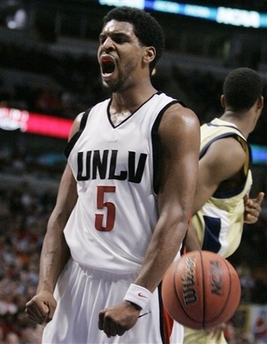 Joey Whelan
@DraftExpress
The NCAA Tournament is a launching pad for the professional careers of a select few under-the-radar prospects every year, and one of 2007s strongest candidates is UNLV strongman Wendell White. Despite cracking the national polls on several occasions, the spotlight had yet to find White and the Runnin Rebels before the first round victory over Georgia Tech. Heading into the game, many considered the Yellow Jackets major advantage to be interior toughness  but it is now obvious that those prognosticators hadnt seen much of Wendell White this year.

And as it turns out, Wendell White, who looks and plays more like one of Spartas 300 than your typical D1-caliber Small Forward, is quite the sight indeed. To gain better perspective on the toughness of this true warrior, all one must do is read this Las Vegas Review-Journal story describing a sequence of events that started with him being literally crushed while taking a charge. 12 stitches and a new jersey later (the old one was too bloody), White was back on the court keying UNLV to a win over conference rival Wyoming. Later, it was revealed that White also received a broken jaw from the hit. Your typical player might have hung it up for a few weeks, maybe even the season. But not White  the doctors wired his mouth shut, and he was on the court four days later. Do a bit more research, and you will learn that this was only one of a series of injuries White gutted his way through over the past four months.

The injuries explain the somewhat inconsistent playing time and production, but given what he did to a pair of fairly tough characters in Georgia Techs Jeremis Smith and RaSean Dickey in the first round, should his first half dominance of Wisconsin come as much of a surprise? White scored at will in the midrange, appearing equally at ease initiating a scoring attempt with his back to and facing the basket. His touch in the midrange is nothing short of superb, capable of fading away out of the post, spotting up, or facing the basket and creating his own shot with an impossible to block one dribble fadeaway. Even Wisconsin was playing a bit scared by the time the halfcourt buzzer sounded, and considering the makeup of players like Alando Tucker, Marcus Landry and Joe Krabbenhoft, this has to be considered quite the accomplishment.

While White would quiet down in the second half after several more impressive midrange scores early on, the tone was set in this one. The Badgers would make one run, but looked uncharacteristically tight the entire way, and coughed up the lead almost as quickly as they regained it. Their typical interior physicality and toughness was conspicuously absent the entire way. Now it would be foolish to equate Wisconsins uncharacteristically soft performance with Whites intimidator presence, but there is no doubting who set the tone early in this one.

Did we mention White was unable to conduct a post-game interview after the Georgia Tech win because of bruised ribs suffered before he scored the go-ahead basket with just over a minute to play?

Obviously, White still has major hurdles in front of him before a career in the NBA becomes assured. Despite being listed as a 66, 215 pound guard on UNLVs roster, White has the build and game of a power forward. He handles it well enough to do most of his damage facing the basket, but his shooting range is limited to a step or two inside the college 3-point line. And where his bulk helps him when it comes to the intimidation factor, it hinders his development as a pure wing. White can certainly slim down and gain a bit of explosiveness (much like Craig Smith did last summer), but it is hard to see him ever emerging as a true SF at the next level.

But looking at the recent success of players like Smith and Ryan Gomes, and the drafting of Renaldo Balkman in the first round a season ago, Wendell White may be able to find a niche in the NBA. His mastery of the midrange jump-shot is certainly a plus, and the undersized PF tag is a bit of a misnomer with the way he can create facing the basket. At the very least, White should have secured himself a spot in Portsmouth next month. Based on his play in the first two rounds of the tournament, its probably safe to assume that White is dressing up his battle wounds right now, licking his chops for the opportunity to lock horns against a less than physically imposing Oregon frontcourt.
Read full article