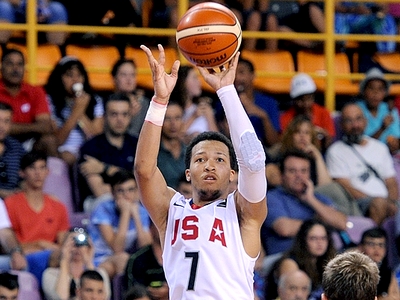 Strengths:
-Solid athlete. Operates at different speeds. Can play above the rim a bit
-Good blend of scoring and playmaking. Can do both and picks his spots nicely.
-Executes offensively very well. Intelligent and disciplined
-Versatile passer. Finds cutters diving to rim, shooters on the wing. Feeds the post nicely
-Excellent ball-handler. Rarely turned the ball over. Very sure-handed with decision making
-Terrific on the pick and roll. Plays with great pace. Uses body to create space, handles ball on a string, makes very good decisions.
-Aggressive attacking in open court
-Was extremely efficient offensively at the U19s. 62% for 2, 44% for 3
-Has an array of floaters he can convert in the lane with both hands around the basket
-Capable shooter with feet set or off the dribble.
-Not afraid to step up on the big moments. Plays with huge confidence

Weaknesses:
-Lacks great size or length for his position. Measured just 6-0 ½ without shoes, with a 6-3 wingspan at the USA Basketball Training Camp. Doesn't make up for that with freakish athleticism
-Made only 5 of his 19 shots off the dribble over course of tournament (but many of his makes were huge shots))

Outlook: The leader of a very young US team that won the championship. Did a great job of keeping everyone under control with his poise and steady hand. MVP of the tournament, and deservedly so. #4 in PER, #3 in assists, #3 in TS%. Played significantly better than we've seen him at any setting. Conditioning is improved, as is his outside shooting, and particularly his finishing ability around the rim. Picked his spots extremely well. Looks ready to step into a significant role for Villanova.

Strengths:
-Good size for a guard. Strong frame
-Terrific athlete
-Great first step and overall quickness
-Beats opponents off the dribble without a screen. A jet with the ball
-Very good in transition
-Solid ball-handler. Can play at different speeds. Plays quite a bit of pick and roll
-Creative and unselfish. Finds open man. Makes some very crisp passes, particularly in drive and dish situations
-Extremely competitive on defense. Terrific lateral quickness. Moves feet well and puts strong pressure on opponents. Can already defend 2-3 positions effectively. Gets in the passing lanes frequently. Among the tournament leaders in steals.
-Very good rebounder for a guard.
-Shows potential as a shooter. Ball comes out relatively smoothly at times. Made a number of shots with feet set in Crete. Not a non-shooter by any stretch.
-More than two years younger than many of the players at this tournament

Weaknesses:
-Unpolished offensively at this stage
-Struggles to finish effectively around the basket.
-Needs to do a better job of drawing and finishing through contact around the basket. Not very crafty with his finishes at this stage. Drives to the basket without a plan
-Very turnover prone. Wild with the ball. Makes questionable decisions.
-Shooting mechanics are not consistent. Sometimes shoots a slingshot jumper.

Outlook: Forced into significant action due to the large number of players who declined to play for Australia at this tournament. Handled himself very well despite playing up two years. Showed some great flashes of potential. Appears to have a substantial amount of upside left to tap into with his terrific size, athleticism and creativity with the ball. Looks like a hard worker and a good teammate. Likely on the NCAA track. Will get recruited at the highest levels of college basketball.

Strengths:
-Good quickness. Can operate at different speeds. Very slithery with the ball
-Terrific in transition
-Good ball-handler. More comfortable driving right, but shows potential driving in either direction
-Doesn't turn the ball over
-Very good on the pick and roll
-Draws a lot of fouls with the pressure he puts on the defense
-Gets to the basket frequently. Good finisher despite his lack of size. Doesn't mind contact.
-Utilizes nifty floaters in mid-range area
-Can pull-up off the dribble if defense goes underneath. Nothing mechanically wrong with his jumper.
-Should be able to develop into a good shooter.
-Finds teammates with simple drive and dish plays. Not selfish.
-Only 17 years old. 18 months younger than some of the players at this tournament.

Weaknesses:
-Small, with short arms
-Skinny frame that shows limited potential
-Average defender at best. Doesn't have great tools on defense, and doesn't show great fundamentals or intensity either
-Jumper has improved, but still on the streaky side at times (32% 3P%). Really struggles with feet set. Much better off the dribble
-Surprisingly poor shooter from free throw line (63%)
-A little wild with the ball at times. Feel for the game, experience level a work in progress still.
-Court vision, decision making skills will need to improve
-Doesn't always trust his off hand. Prefers to drive right. Finishes with right hand on left side of basket.

Outlook: A pleasant surprise in Crete. Appears to have improved substantially from last summer, where he was just an average player at the FIBA Americas U18s. Primary shot-creator for Dominican Republic, asked to do quite a bit for this team. Fearless scoring point guard. Has an average physical profile, which limits his upside for the highest levels. Has the makings of a very good college point guard. Rumored to be heading to USF to play for Orlando Antigua, whose brother was one of the coaches for this team.

Outlook: Has been the starting point guard for the Turkish junior national teams since he was 16 years old. Had a very strong U18 European Championship last summer, leading his team to the championship, but had a difficult 2014-2015 season, struggling to get any playing time for Euroleague Final Four participants Fenerbahce. Missed a game with an injury at the U19s, but was generally up and down with his play. Didn't make a single 3-pointer which is a real concern. Will need to find a situation next year where he can get serious playing time at the pro level.

Weaknesses:
-More smooth than explosive. Struggles to turn the corner on drives
-Doesn't initiate contact around the basket. Drives softly to the basket. Doesn't finish through contact. Throws up tough shots around the rim. Doesn't like using his off hand to finish.
-Doesn't get to the free throw line
-Somewhat stuck between guard positions. 1/1 assist to turnover ratio in Crete
-Lacks consistency as a shooter. Shot just 18% for 3 in Crete
-Looked passive/uncomfortable operating without the ball. Not assertive enough to find ways to utilize his talent without being the primary facilitator.
-Average defender

Outlook: Did not have a great tournament, following up a somewhat disappointing showing at the NBA Basketball Without Borders Camp in New York in February, although he was almost playing up by two years being born in late 1997. Struggles to show his talent and creativity when everything doesn't revolve around him offensively, which it didn't. Argentina's lack of chemistry didn't help matters. Must continue to progress as an outside shooter and play with more aggressiveness.
Read Next...