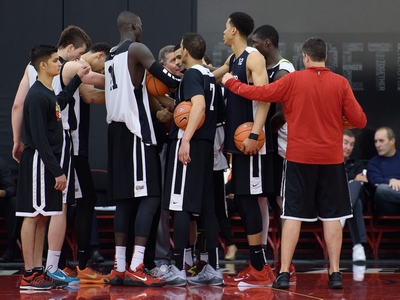 Jonathan Givony
@DraftExpress
The fourth day of practice for the Nike Hoop Summit World Select Team was shorter, and less physically demanding, starting later and ended earlier than scheduled. This was certainly by design as the coaching staff tries to get the squad physically ready for the game on Saturday and avoid tiring the players too much after an intensive schedule the past few days. A second, private scrimmage was conducted later in the evening where the coaching staff will feel more at ease to implement their game-plan without any unnecessary eyeballs, and the players' legs were undoubtedly being saved for that.More DX Nike Hoop Summit Coverage
-One on One Drills: Skal Labissiere vs Thon Maker
-Federico Mussini Interview
-2015 Nike Hoop Summit: International Practice: Day Three
-USA Practice Day One
-Skal Labissiere Interview
-Ben Simmons Interview
-International Practice Recap Days One and Two
-World Select Team Measurements and Analysis
-2015 Nike Hoop Summit International Roster Breakdown
The Portland Trail Blazers facility was packed from wall to wall with NBA executives as almost every top-level decision maker has made an appearance thus far, with today being especially popular due to the possibility of watching the US Team scrimmage later in the evening.

Zhou Qi again elected to sit out today with what appears to be a very minor ankle sprain, which was a cause for some consternation among team officials and especially NBA scouts here who already have major question marks about his toughness and long-term durability.

Five on zero transition sets started things off as the team worked on their early offense and got the blood flowing, followed by more shooting drills going around the arc. Big men again did 18 footers followed by 3-pointers, while the guards shot NBA 3s all around.

The team did more work on their defensive concepts, particularly in regards to switching on pick and rolls and fronting the post, an aggressive strategy that can certainly work with the incredible length and mobility the World Team has in the frontcourt.

The majority of the practice was dedicated to five on five scrimmaging, which no one in the audience was opposed to at all. The two different lineup variations we saw were: Mussini/Murray/Simmons/Skal/Wynyard vs George/Peno/Buza/Maker/Diallo and Mussini/Peno/Simmons/Maker/Diallo vs George/Murray/Buza/Skal/Wynyard. This appeared to be more a matter of distributing the talent evenly rather than any real insight into the lineups we might see in the actual game on Saturday.

The scrimmage again gave NBA talent evaluators a chance to see the tremendous talent of Skal Labisserie, who quickly separated himself from the pack early in the week and just continues to put distance between himself and any other prospect on the World or US team. Today was the day that Labisserie showed off his shooting stroke, as he made a number of beautiful long-range jumpers with absolutely no hesitation and outstanding touch. He also attacked the rim when given the opportunity to, blowing by his defender in one instance and throwing the ball down with his (weaker) left hand, which was somewhat of a surprise. He also threw up a very smooth-looking floater from just inside the free throw line that seemingly hung in the air for a good ten seconds before finally dropping with incredibly soft touch. 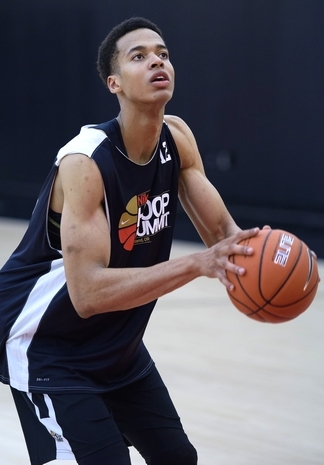 His defense was also on display as part of the World Team's switching pick and roll defense, as he showed no problem moving his feet and staying in front of much smaller players and was even able to recover and make some impressive plays at the rim at times as well. He has no idea how good he can be was the line you heard repeated the most by NBA scouts, as while he's far from a finished product in terms of his body and skill-level, he most certainly has a natural feel for executing advanced plays combined with tremendous physical tools that gets NBA executives extremely excited.

Tai Wynyard had one of his best days of the week, crashing the offensive glass repeatedly with his thick frame and strong motor. He has gotten wiser about going straight up with the ball and not giving the World Team shot-blockers any opportunity to bother his shots inside the paint, which is important considering his lack of length and verticality. Wynyard perhaps isn't the prototypical athlete Kentucky usually recruits, but his toughness and work ethic should help him carve out a role among their sea of All-Americans as his career progresses.

George de Paula also had a better outing than he did earlier in the week, making some outside shots, passing the ball effectively in transition, and coming up with a handful of very impressive defensive plays. His lack of confidence has been evident, and it's caused him to hesitate badly throughout the week, being a step-slow with his passing, passing up open looks to step into a contested one, and look extremely shy and withdrawn from the group. 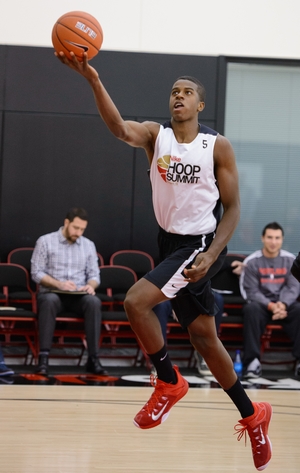 Still, the flashes of talent he displays at times is undeniable, particularly on defense, where his incredible physical tools makes him an absolute terror, but also with his shooting and passing as well. He seems to know how much of an unfinished product he is in an interview we conducted with him, and talked repeatedly about the things he still needs to work on, mostly discussed above.

It was very interesting to see the way Ben Simmons was utilized as the ball-handler in pick and roll situations in the half-court, as he's such a mismatch at his size at the small forward position, and has a tremendous feel for drawing the defense and then finding the open man. When he's focused on playing the right way and not trying to thread the needle with impossible behind the back bounce passes in transition for highlight reel plays, he's extremely impressive.

Cheick Diallo did a great job of getting up and down the floor today. His motor was running hot and he had some very strong finishes around the basket. On the other end, he protected the paint well with his 7-4 wingspan and didn't have any qualms about mixing things up with the taller big men, particularly on the glass where he's a force to be reckoned with. He's looked very intent this week on showing off his mid-range jumper, and was able to knock down a couple of them today, which wasn't the case in the past few days. His passing ability appears to be better than advertised, and he again dropped a few bounce passes today to cutters that hinted at nice things to come as his feel for the game continues to improve.

Thon Maker continued to play with great energy, showing terrific activity and much more toughness than you'd expect considering his extremely frail frame. Offensively he wasn't overly productive, at times looking too focused on showing off his ball-handling skills and forcing the issue rather than making the simple pass. His versatility and basketball IQ is very impressive at his size, and it will be interesting to see if his outside shot can continue to become more consistent.
Read Next...