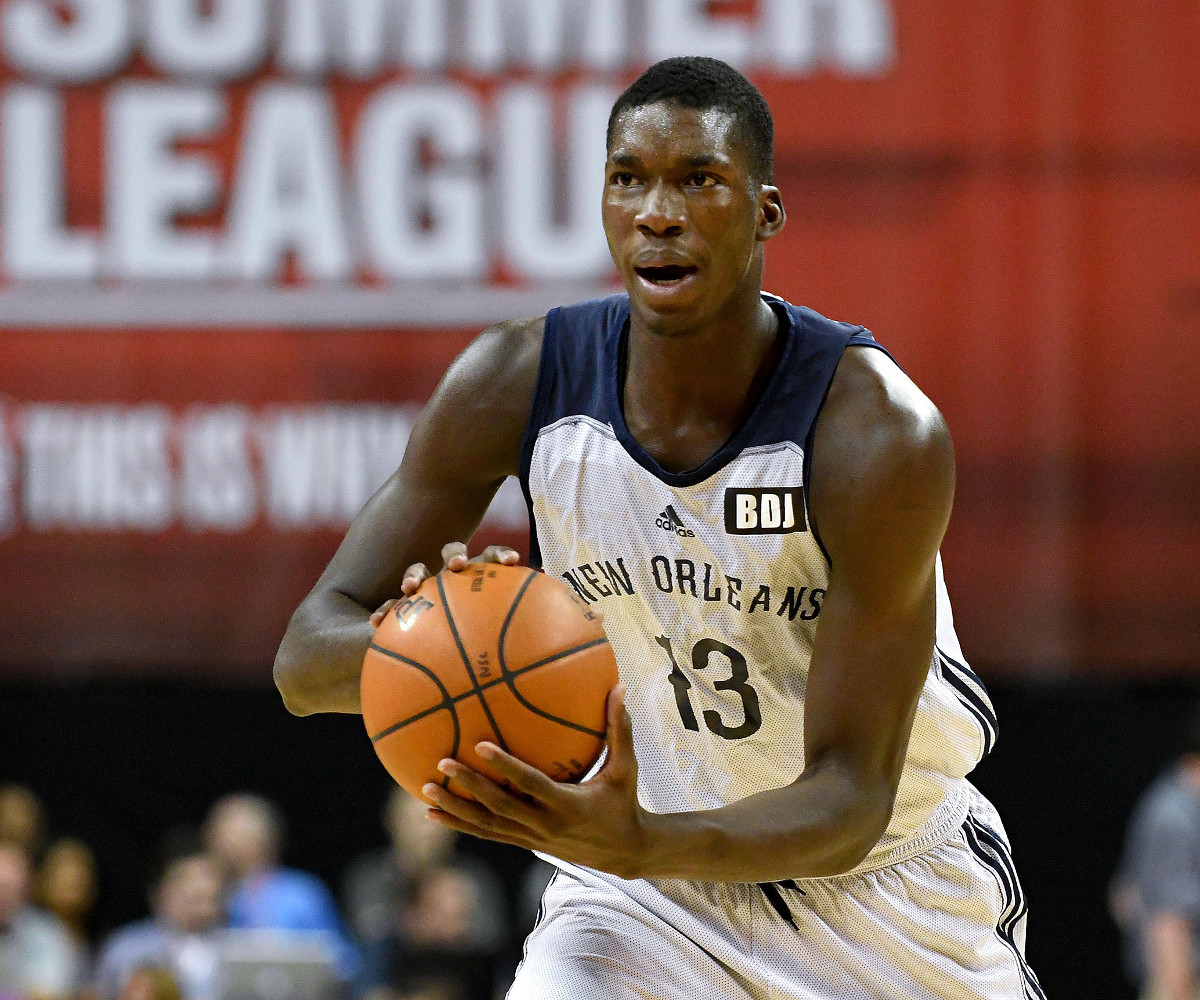 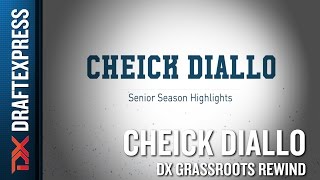 While similarly rated prospects elected not to participate at the NBA Combine this week, Cheick Diallo told us that simply wasn't an option for him after the season he had warming the bench at Kansas. Diallo backed that up in a major way with a strong showing in Chicago, rebounding, blocking shots and finding ways to score a little more often than you might expect considering his raw skill-level.

Diallo is clearly undersized at 6'7 ½ barefoot and just 219 pounds considering the role he'll be expected to play in the NBA, but that didn't stop him from being extremely productive in almost every minute he was on the floor. His energy-level was outstanding, as he runs the floor and covers ground incredibly well, and is seemingly always around the ball looking to make plays and get his team extra possessions.

Diallo's offensive polish and feel for the game are still at an early stage of development, as he tries to do a little too much at times, but his better than average touch gives him a chance to develop into a serviceable option as he continues to figure out his role on the floor. In the meantime, his propensity for protecting the rim and crashing the glass with his 7'4 ½ wingspan could help earn him minutes as he adds strength and begins to figure out the best way to put his tools to use.

After a difficult season, Diallo did a great job of making the best of his time in Chicago, and seems to have boosted his stock firmly into the first round provided he continues the momentum he built into private workouts.
Read full article

After sitting on the bench at Kansas all season, Cheick Diallo didn't shy away from the opportunity to finally showcase what he can do in front of NBA executives, despite being one of the youngest players on the floor at all times.

Diallo showcased his strengths and weaknesses quite vividly, being able to have a very productive game on both ends of the floor, and even finding ways to score despite his somewhat unpolished skill-level.

Diallo's trademark high energy level was on full display throughout, as he ran the floor extremely hard and covered ground much more effectively than most players his size are able to. He was especially impressive on defense, where he blocked four shots in 22 minutes and was scrapping and hustling non-stop, diving on the floor for loose balls and flying around constantly.

Diallo has clearly been working on his shooting mechanics and displayed a smoother and more compact release while in Chicago, which paid off in the form of a nice looking mid-range jumper he hit at one point. He also was the recipient of a number of dump-off passes around the rim, which he was able to get to due to his knack for being around the ball and always staying involved in plays.

Diallo's lack of experience and still developing frame means he still has plenty of room to improve on both ends of the floor, as he's not particularly polished and can look a little to sped up at times. That's to be expected though considering his age and how little high-level basketball he's played up until this point. The fact that he was able to be productive in this setting against players significantly older than him likely helped his standing in the eyes of NBA teams.
Read full article

Cheick Diallo probably didn't have the kind of freshman season he anticipated, missing Kansas' first five games while embroiled in an eligibility battle with the NCAA, and then playing a marginal role for the Jayhawks down the stretch, not even participating in half a dozen contests.

Diallo played just 7 minutes, 30 seconds on average in the games he did get in off the bench, even if he was very productive in the sporadic time he saw, at 15 points (55% 2P%), 13 rebounds, 4.5 blocks and 1.4 steals per-40 minutes. Diallo lack of playing time came due to a combination of his struggles picking up the playbook, and the presence of three 22-23 year old upperclassmen who had gained the trust of Bill Self with their experience and consistency. With that said, Kansas fans can only wonder if their Final Four dreams may have been reached had the underclassmen on the roster been further developed during the season, as he did not have the luxury of playing through errors and learning from his mistakes like most freshmen at the college level.

With a 7'4 wingspan and 9'1 standing reach, Diallo has ample length to play the small-ball center role he seems destined for in the NBA, even if he does not possess ideal height at 6'9. While not freakishly explosive, Diallo is extremely nimble and agile for a player his size, being capable of moving his feet extremely well both getting up and down the floor and covering ground in the half-court on either end. At just 220 pounds, he still needs to get significantly stronger, particularly in his base, but seems to have the frame to do so in the long term.

Offensively, Diallo is a raw prospect at this point in time, being mostly relegated to put-backs, pick and roll finishes, rim-runs, and other simple plays. He does a good job of sprinting into screens and then diving to the paint with impressive speed and purpose, and is a capable target as a finisher around the basket. He also tosses in the occasional mid-range jumper, a little more often than you might expect perhaps, but does not possess great mechanics and often looks somewhat rushed with how willing he is to show off his part of his game.

Diallo showed he can make an impact on the glass at the college level, averaging over 13 rebounds per-40 minutes, as he possesses great tools with his quickness and length, to go along with a huge desire to throw his body around and make things happen with his aggressiveness and physicality.

That same reckless abandon that makes him so effective as a rebounder (and at times, a defender) also plays against him offensively in the half-court. Diallo's skill-level and feel for the game is still very much a work in progress, as he mostly plays off his instincts. He does not possess any real footwork or counter moves, and often looks rushed whenever he catches the ball, appearing to be somewhat of a black hole. He generated just one assist in 195 minutes, as opposed to 17 turnovers, many of which were of the unforced variety, with three second violations, moving screens, and charges galore. This unpredictable nature likely played a major role in Kansas' coaching staff eventually going away from him as the season moved on.

Defensively, Diallo shows significant potential, with his outstanding combination of mobility, length and high activity level. He demonstrated good instincts as a shot-blocker, swatting away 4.5 shots per-40 minutes, doing so with both hands, and even without needing to jump at times due to his excellent reach. Even more impressive is the way he covers ground on the pick and roll, stepping out on the perimeter to hedge with great quickness, and being capable of switching onto guards and staying in front using his length and agility.

With that said, Diallo is still a long ways away from putting it all together on the defensive end, as he lacks experience in a serious way and does not possess great fundamentals or awareness at this stage. Diallo plays off his instincts quite a bit here as well, being susceptible to biting on fakes, rotating wildly for blocks, and fouling at a very high rate (7.8 times per-40 minutes). It will take him some time to learn the concepts of NBA half-court defenses, and adding strength will also be a major priority in the long term, as he has a tendency to get pushed around with his lack of bulk.

Diallo was caught in a tough situation this year, as there are very few college basketball programs like Kansas who had the resources to fight the NCAA and not give in to their spiteful vengeance. At the same time, it's easy to understand how he could get lost in such a crowded and experienced frontcourt like the Jayhawks had. To Diallo's credit, he never allowed himself to become a distraction and always appeared to be a positive presence on the bench cheering for his teammates. That's a good sign considering he's unlikely to play a huge role early on in his NBA career either, as he still needs quite a bit of development to reach his full potential.

The 6' 9 big man only played 16 minutes after starting the game, but made a few impressive plays as a finisher, offensive rebounder and shot blocker that make it easy to see him as a high-motor, energy big man in the NBA. He blocked three of the US Team's 12 shots, finished a big dunk in transition, and showed good activity on the offensive glass. On the flip side, Diallo forced up a bad shot in the lane, got the rebound and missed another tough, highly contested left handed jump hook. Although his feel for the game and offensive skill level leave much to be desired, Diallo's 7' 4 wingspan, motor and fluidity should make him a highlight reel at the college level.
Read full article

Jonathan Givony
@DraftExpress
Cheick Diallo did a great job of getting up and down the floor today. His motor was running hot and he had some very strong finishes around the basket. On the other end, he protected the paint well with his 7-4 wingspan and didn't have any qualms about mixing things up with the taller big men, particularly on the glass where he's a force to be reckoned with. He's looked very intent this week on showing off his mid-range jumper, and was able to knock down a couple of them today, which wasn't the case in the past few days. His passing ability appears to be better than advertised, and he again dropped a few bounce passes today to cutters that hinted at nice things to come as his feel for the game continues to improve.
Read full article

At 6-9, Diallo is definitely the size of a power forward, and it might be difficult for him to play the center position his skill-set is best suited for offensively. He's also very light at the moment at just 220 pounds, having only gained two pounds since our last measurement this past summer. Players like Anthony Davis and Larry Sanders had similar frames at the same age, so there is still plenty of time for him to continue to fill out once he hits a college weight room. Not only is his 7-4 wingspan absolutely gigantic, he also has a terrific 9-1 standing reach. His measurements are similar to those of Taj Gibson who weighed in at 214 points with a 6'9.75 frame, a 7'4 wingspan and a 9'1 standing reach at the NBA Draft Combine in 2009.
Read full article