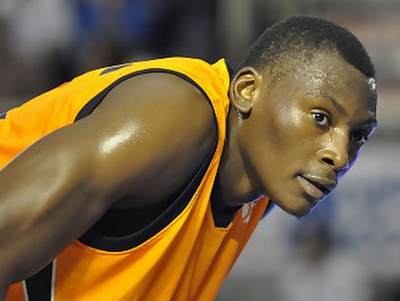 Jonathan Givony
@DraftExpress
Bismack Biyombo's story is one of the most improbable you'll find in this year's draft class.

Biyombo is the son of government officials in the Congo and the first of seven children. He was introduced to basketball by his father and his uncle, both of whom played basketball in the Congo's semi-professional first division league.

In high school, I was playing with friends, he said. And one of my friends, we were playing one day, and he was just like, Why don't you really want to play basketball more seriously? Why don't you want to compete?'

His progress from there was rapid. Within a year, Biyombo was already competing in Congo's first division. Soon scouts from teams in the Middle East began to recruit him.

The only obstacle, at that point, was his father.

He said no, Biyombo told me. I was trying to talk to him every day to convince him. He said, Wait for the right time. You're a young kid. You don't want to push yourself the wrong way.'

So I went to my mother to ask her to let me go play professional. Her answer was, NO!'

Eventually, after a year of persusaion, Biyombo's parents agreed to let him fly to Qatar to try out for a professional team.

Word of the springy Congolese with arms down to his knees and a relentless motor spread quickly from there. .

From Qatar he went to Jordan, then to Lebanon and finally to Yemen. In total, he spent six months jet-setting around the Middle East.

His breakthrough came in a tournament against the Jordanian national team, coached at the time by a Portuguese coach named Mario Palma. 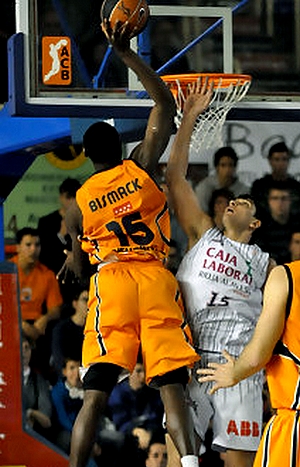 Biyombo impressed Palma on the court with his tremendous physical tools and talent to the point that Palma decided to approach him after the game. He was blown away when he learned that Biyombo was only 16 years old and immediately contacted his friend in Spain, agent Igor Crespo, and urged him to take a look at the young prospect.

You have to see this kid, Palma wrote Crespo. He is from another planet. He is gifted for basketball and for life. I have no doubt that he will be an NBA player at some point if he works with the right people. You have to come to Yemen and meet him.

Crespo soon arrived in Sana'a, Yemen, and quickly arranged for Biyombo to move to Spain with him (the move came on June 11, 2009). Biyombo slept on a couch in Crespo's apartment in Vitoria and began to work out with Pepe Laso, who later became his personal coach and mentor, and Crespo's associate Richi Gonzales.

Crespo arranged for teams to watch his new client in an attempt to get one of them to sign and develop him. Caja Laboral, Unicaja Malaga, Real Madrid, CAI Zaragoza and Fuenlabrada all came to evaluate him, but in Biyombo's words, they said that it was really difficult for them to sign me.

It was very difficult for them to believe in me, he said. No one knew me. It was my first time in Spain.

Eventually Fuenlabrada decided to bite, signing Biyombo to a five-year contract. They juggled him between their first, second and third teams during his first 18 months in Spain.

Caja Laboral had already gone through two import big men by then (first Pops Mensah-Bonsu, then Marcus Haislip) and was desperate for a center after getting off to a terrible start. Fuenalabrada cashed in in a major way and immediately began looking for a big man to replace Batista.

In the mean time, they decided to bring up the very green Biyombo to practice with them, temporarily, to plug the hole that was created by Batista's departure.

Fuenlabrada was desperately trying to sign Richard Hendrix from Maccabi Tel Aviv, but the Israelis were reluctant to let the former NBA player go. 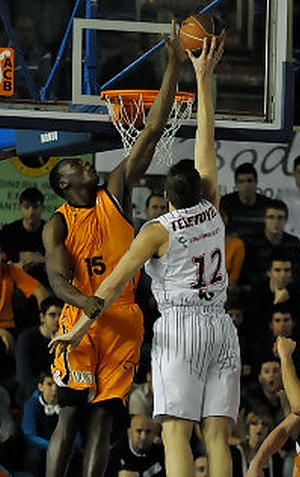 With each day Biyombo continued to improve.

Before anyone realized what was happening, the anonymous Biyombo was leading the ACB in blocked shots and field goal percentage while ranking #1 in per-minute rebounds and near the top in per-minute free throw attempts. He moved straight into the top 20 of DraftExpress' top 100 rankings, making one of the biggest jumps in the site's history.

Fuenlabrada's hunt for an American center came to a halt. They realized they had one of the best prospects in Europe on their hands; an incredible force inside the paint who has unlimited potential.

Sheubrooks quickly extended an invite Biyombo to play at the Nike Hoop Summit, which was to be played in Portland. Crespo had wisely included a clause in Biyombo's contract allowing him to attend the event if he was invited, something no one dreamed possible when Biyombo was signed 18 months prior.

The rest is history.

Biyombo registered the very first triple-double (12 points, 11 rebounds, 10 blocks) in the history of the Hoop Summit, shattering Kevin Garnett's record for blocked shots in the process. Now he's projected as a potential lottery pick by many teams.

Just three months after being added to our own database, Biyombo elected to enter his name in the 2011 draft, as we reported exclusively on April 5.

Biyombo is under contract with Fuenlabrada for another three years, but he has a relatively simple NBA buyout clause (1 million Euros). What's even more attractive is the fact that the NBA team that drafts him can rest assured knowing that he can continue to play in Europe in the event of a lockout, which won't slow his development.

Stay tuned later this week for a detailed breakdown on Bismack Biyombo's strengths and weaknesses.