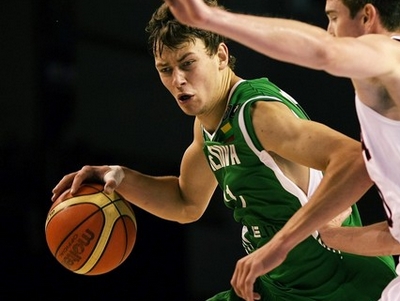 Jonathan Givony
@DraftExpress
Donatas Motiejunas adjusting to life in the Italian first division with Benetton...Jeremy Tyler shooting himself in the foot...Gecevicius the top youngster in the Euroleague...Aradori emerging as a prospect...Milutinovic on fire early.

After transferring this summer from a tiny team competing in a small league in his local first division to Italian based Benetton Treviso, were witnessing the first steps taken by top Lithuanian prospect Donatas Motiejunas.

So far, the transition hasnt been easy, which is to be expected considering the immense jump in the level of competition he's facing, but he has been making progress from week to week, something well have to continue to track as the season moves on.

Motiejunas is coming off the bench for Benetton, playing most of the frontcourt minutes (16.4 on average at the moment) left over by power forward Judson Wallace and center Sandro Nicevic. In contrast to last season, hes not a focal point for his team offensively in the least bit, mostly living off scraps in the form of pick and roll finishes, weak-side cuts, spot-up jumpers, easy finishes recieving the ball in transition, and the occasional post-up play. Considering his rookie status and the stage of development hes currently at, this is not a surprise in the least bit. This season has been a learning experience for Motiejunas thus far, one that will very likely be very beneficial as he makes the transition to first round draft pick and eventually, NBA player.

The main thing holding Motiejunas back at the moment is his lack of strength, which has been incredibly evident in all the film weve seen thus far, on both ends of the court. Motiejunas lacks the bulk to operate as effectively in the paint as his terrific skill-set and athleticism indicates he should be able to, struggling to establish position inside and having a very difficult time finishing his moves in traffic when taking contact around the rim.

Defensively, Motiejunas is getting posted up quite a bit, leading him to foul at a very high rate, and having a difficult time with his off the ball defense, looking somewhat lost on rotations. Hes agile enough to step out nicely on the perimeter and hedge screens defending the pick and roll, but will require experience at this level to learn how to put his athletic gifts to proper use.

Perhaps the place where Motiejunas is struggling the most right now is on the glass, having grabbed just four defensive rebounds in 82 minutes of action through five Italian league games. Its not hard to come away with the feeling at times that Motiejunas lacks quite a bit of toughness watching him being boxed out with ease while casually going after loose balls with one hand, and this will be a significant concern for NBA decision makers moving forward if he cant find a way to pick up his play here. He looks very indifferent setting screens and stepping in to take charges, avoiding contact and not really being in a huge rush to sacrifice his body for the sake of the team.

On the positive side, Motiejunas terrific talent-level is constantly on display, sometimes in small flashes and sometimes in very large ones. His excellent hands, extremely nimble footwork and terrific mobility are all huge assets that have clearly translated to this level of competition, and have already allowed Motiejunas to establish himself as a scoring presence even with limited possessions.

The terrific touch he displays around the rim is especially impressive. Hes an incredibly natural scorer in the paint, converting on beautiful hook shots, hitting spot-up jumpers, putting the ball on the floor nicely, and converting other unorthodox shots confidently and instinctively. The fact that Benetton really has no true point guard on their roster probably isnt helping him that much, but the Lithuanian big man is talented enough to go out and get his own offense, which not many 19-year olds playing at this level of competition can say.

Benetton unfortunately was not able to get past French minions Orleans in the Euroleague qualifying stage, meaning well have to settle for watching Motiejunas play on Tuesdays in the EuroCup instead. Hell compete against the likes of Kevin Seraphin at Cholet and Nemanja Bjelica at Red Star Belgrade, which will at least make NBA scouts a little less unhappy.

Right now Motiejunas looks a little bit lost, clearly lacking some confidence and needing time to settle into his new role against the much stronger opponents hes facing compared with last season. Its way too early at this juncture to draw any long-term conclusions based on Motiejunas play, so well just have to continue to watch closely and see how he progresses.

-If you havent done so already, check out Pete Thamels must-read article in the New York Times about the struggles of high school senior Jeremy Tyler in his first season of professional basketball. Those who have followed our coverage of Tyler on this site since we first saw him play two years ago wont be very surprised to read how things are turning out, but its still a bit disappointing to see things actually play out.

-
One of the few draft-eligible prospects actually contributing in a major way in the Euroleague this season is 21-year old Lithuanian shooting guard Martynas Gecevicius, competing for 3-1 Lietuvos Rytas in a very tough group. Gecevicius is averaging nearly 16 points per game in a whopping 34 minutes. On the season, hes shooting 36/71 (51%) from beyond the arc in 13 games in the three competitions (Euroleague, Lithuanian league, Baltic league) he plays in. He sports a lightning quick release and is near-automatic with his feet set.

Gecevicius is interestingly operating as his teams primary backup point guard this season and is finding some success there thanks to his excellent feel for the game. He lacks great physical attributes, though, being somewhat one-dimensional as he relies very heavily on his 3-point stroke. Skinny, and not particularly big or athletic, he likely lacks the physical attributes (especially on the defensive end) to be considered a very interesting NBA prospect in this, his draft-eligible year. Regardless, he looks poised to develop into a terrific player for high-level Europe.

-
On a similar note, we should point out the terrific early season performance of Italian shooting guard Pietro Aradori. Well focus in on him in a lot more depth once we make our annual trek to the lovely town of Biella, but for now its worth mentioning that the 20-year old currently ranks in the top 10 in scoring in the Italian league, with 16 points per game. Aradori is putting up those numbers in an efficient manner as well, hitting 57% of his 3-pointers, getting to the free throw line at a very high rate, rebounding the ball extremely well, and getting in the passing lanes nearly 2 times per game. All this combined has him currently ranked 7th in the Italian league in PER, no small feat for a player this young.

Aradori is doing it for a good team too, as Biella currently sits in 3rd place with a 4-1 record, fresh off a terrific road win over Rome this past weekend. Lets see if Aradori, together with the rest of coach Luca Bechis troops at Biella can keep it up, particularly as they begin to play twice a week when the EuroCup kicks off at the end of this month.


-
One of the best NBA draft oriented storylines developing in the always-interesting Adriatic league revolves around 19-year old Serbian wing player Andreja Milutinovic. Despite coming off a lackluster spring and summer at the junior level, when he played very uninspired basketball, Milutinovic has bounced back in a major way, emerging as the go-to guy of his very young FMP Zeleznik squad, and leading them in scoring thus far with nearly 14 points per game.

Milutinovic seems to have found a new bounce in his step, as hes attacking the rim with great purpose on a regular basis, often finishing extremely well once there. Beyond that, hes been absolutely lights out from beyond the arc, converting on over half of his four 3-point attempts (52%), while shooting a blistering 64% from 2-point range. For a prospect often criticized for being passive and not playing up to his full potential, Milutinovic has been about as aggressive as you could hope for in the early going of the season, both in the half-court and in transition situations.

Only five games into the season, its still a bit too early to get overly excited about Milutinovics performance. Still, considering his very nice physical attributes for a European prospect, and extremely young age, its something worth noting and following as the year moves on.
Read Next...