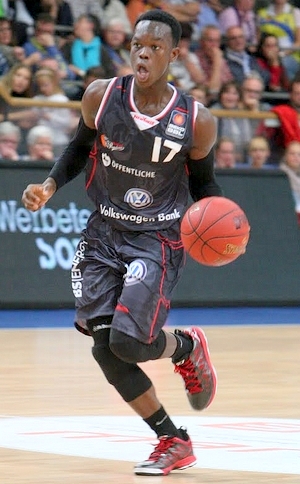 Six games into the 2012-2013 season, it's safe to say a very intriguing prospect is emerging in the increasingly respected German BBL.

1993-born point guard Dennis Schroeder (or Dennis Schröder) is seeing starting caliber minutes for the New Yorker Phantoms from Braunschweig, and currently ranks among the best per-minute scorers and passers in the league.

The son of a Gambian mother and German father, Schroeder is a bit of a late bloomer, as he wasn't deemed good enough to make the German national team youth teams until last year, not progressing past training camp the two summers prior. He had a strong showing at the U18 European Championship in the summer of 2011, and then again represented his country at the U20 European Championship this past July, where he settled for a backup role.

Schroeder saw some rotational minutes for Braunschweig already last season, but spent most of his time with SU Medien in Pro B, which is the third division in Germany. He's been playing an increasingly large role since the season kicked off in early October, up to 25 minutes the past two games.

Schroeder has average size at around 6-1 (possibly 6-2 in shoes) and a narrow frame, but is one of the better athletes you'll find amongst European guard prospects, and has an extremely long wingspan.

His biggest strengths as a NBA prospect revolve around his quick first step and excellent ball-handling skills, as well as his ability to play at different speeds and utilize shifty hesitation moves to keep defenders off balance.

A force in transition thanks to his blazing speed, Schroeder also shows excellent potential in the half-court with his proficiency running the pick and roll. He's fast enough to beat opponents and force the defense to rotate, but also a creative enough passer to find teammates on the drive and dish, sometimes in spectacular fashion. He's extremely confident and aggressive with the ball in his hands, something that is quite rare considering his age and the level of competition he's playing at, making quick decisions within the flow of the offense.

The area Schroeder has shown the biggest improvement in thus far this season is with his outside shot. Shooting just 62/209 (29.7%) from beyond the arc in the 60 games he played in last year in various competitions, Schroeder has converted on 10 of his 18 (56%) attempts through six games. This is a very small sample size, but is nevertheless an encouraging sign that scouts will continue to monitor moving forward. While he does not possess a particularly quick release, and shoots an incredibly high arcing rainbow jumper, his mechanics are consistent and he's been very reliable with both his feet set and off the dribble.

Where Schroeder must improve on the most is as a scorer inside the arc, where he's converted just 33% of his 2-point attempts this season. He doesn't always go as strong to the rim as his speed suggests he can, preferring at times to pull up in the mid-range when he has a path to the basket, which is a much lower percentage attempt, and which is not a strength of his at this stage. When he does drive all the way into the lane, he often struggles to finish around the rim due to his lack of strength, particularly with his left hand. To reach his potential as a scorer, Schroeder must improve upon his ability to draw fouls inside the paint and earn easy points from the free throw line, as well as polish his in-between game, including his floater.

Having only turned 19 last month, and listed at just 157 pounds by his team, it's clear that he has a ways to go in terms of maturing physically still, which is more noticeable at this level playing against grown men than it might be at the college level versus similarly aged players.

Schroeder can also clearly still improve on the mental side of the game, as is always the case with players this age. His decision making ability still needs work, as he's fairly turnover prone, something that has been an issue throughout his career. He looks a little nonchalant with the ball and will try and force the issue at times, as it's clear that he still lacks much in the ways of experience at this level of competition and is still figuring out what works and what doesn't.

More concerning is the body language he shows on occasion, as he seemingly loses his temper somewhat easily, and can be a bit too demonstrative around his teammates, especially considering his age. He faced harsh criticism for this from his former U18 national team, Kay Blumel: He's not a bad kid, but sometimes his behavior towards his teammates is not how it should be," the coach told FIBA Europe.com in July of 2011.

"At this time a year ago it was even worse than it is today. He has improved a lot on that and is still improving. I'm telling him that as the point guard you have to be the leader of the team. You need to get your teammates behind you and follow you. And you have to take care of that on and off the court - that everybody likes to play with you."

Defensively, Schroeder is somewhat of a mixed bag. His quick feet and extremely long arms are huge assets here, often allowing him to makes plays in the passing lanes or smothering an opponent with his length and forcing them to alter their shots badly. His narrow frame and average fundamentals can get exposed against older and stronger players, though. He seems to lose his focus here at times, not always getting in a low stance, preferring to just swipe at the ball from behind after getting beat. Schroeder shows great potential here at times with his lateral quickness, and certainly has the ability to develop into a capable player on this end of the floor, but he's not there quite yet, particularly from a physical standpoint.

All in all, Schroeder has done a great job establishing himself as a very productive contributor at an extremely young age in a highly respected European league. Add in the fact that he has a very American friendly style of game, and a coveted asset with his combination of speed, ball-handling ability and creativity, and it's easy to get excited about what the future may hold.

At the same time, Schroeder is in a very early stage of his development still, and by no means is a proven commodity just yet. We'll have to see how he progresses and whether he can continue to find the same success moving forward, but NBA scouts will surely be following closely.
Read Next...