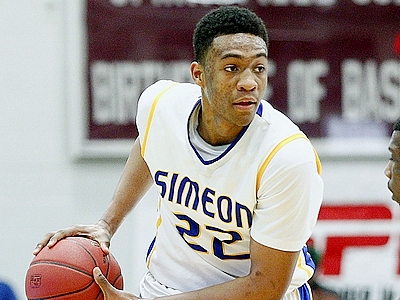 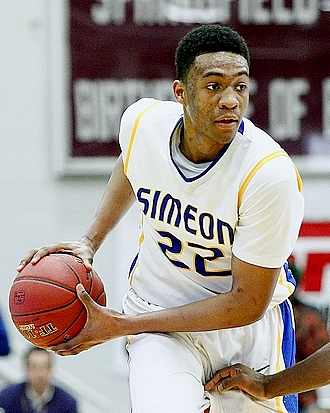 -Terrific size at 6-9
-Strong frame
-Very advanced scoring instincts
-Outstanding shooter with feet set, as well as off the dribble
-Capable of generating good looks in mid-range area with size, high release point and ability to fade and create separation
-High basketball IQ. Plays under control. Makes the extra pass
-Can post up a bit, mostly to shoot a turnaround jumper
-Good anticipation skills for rebounds/blocks. Shows good instincts tracking offensive rebounds coming off the glass
-Has a go-to mentality. Very confident in his abilities

Weaknesses:
-Allowed himself to get extremely out of shape during injury, gaining a substantial amount of weight
-Body still looks very loose
-Struggles to get all the way to the basket in the half-court
-Doesn't have the first step needed to turn the corner against better defenders
-Tends to settle for a lot of low percentage shots, contested pull-up jumpers with a high degree of difficulty
-Lacks great lateral quickness. May struggle to contain explosive small forwards off the dribble
-Effort on defense looks questionable at times

Outlook: Shows tremendous scoring instincts at 6-9, but with his thick frame, is looking more and more like a power forward these days than a small forward. Has the type of body that can get out of shape quickly, which may be a concern long term. Never been an overly explosive athlete, so must do everything he can to maximize himself physically. Remains to be seen how much more upside he still has to grow into.

Strengths:
-One of the most explosive athletes in high school basketball
-A highlight reel waiting to happen any time he steps out on the floor
-Very intelligent and mature player, despite his age
-Fundamentally sound. Makes the extra pass. Plays the right way. Good teammate
-Solid ball-handler, particularly in the open court
-Tremendous first step, which puts a great deal of pressure on the defense. Draws lots of fouls by simply attacking opposing big men in a straight line
-Can make an open jump-shot with feet set
-Plays extremely hard
-Very good rebounder. Boxes out. Puts an effort in on the glass

Weaknesses:
-Somewhat undersized for a power forward at 6-8
-Still needs to keep improving his skill-level offensively
-Not a knockdown shooter yet
-Shooting mechanics pulling up off the dribble still need work
-Doesn't have much of a post game
-Needs to continue to improve his ball-handling skills in the half-court

Outlook: One of the youngest players in his class. Appears to have significant upside still. Body should continue to fill out impressively. Already extremely productive despite some clear limitations, thanks to effort level, athleticism and smarts.

Weaknesses:
-Has average size at 6-1 in shoes
-Much better in transition than in half-court at moment
-Has a reputation for being an average shooter (not the case when we saw him)
-Needs to improve ability to control the tempo of game
-Somewhat out of control at times
-Doesn't finish great with left hand
-A year older than most of the players in his class, born in December of 1993.

Outlook: Athletic scoring point guard who can finish emphatically and also finds teammates off the dribble. Extremely talented with the ball in his hands. Seems to have improved his jump-shot this season. Has all the attributes needed to be a top college player at his position. Should already be a freshman in college age-wise. Will be able to step in from day one and make a major impact on both ends of the floor.

-Outstanding size for a center. Measured 6-11 in shoes, with a 7-0 wingspan and a 263 pound frame
-Strong frame allows him to carve out deep post position inside at will
-Major presence on offensive glass
-Possesses solid hands
-Has a basic back to the basket game after sealing off his man
-Capable of scoring with a right-handed jump-hook shot or simple duck-ins

Weaknesses:
-Not incredibly explosive
-Struggles to finish around the basket in more complicated situations due to lack of elevation
-Not incredibly skilled at this stage in terms of post moves, footwork or counters
-Needs to improve left hand
-Average free throw shooter
-Average defender. Struggles to step out outside the paint. Does not possess great lateral quickness. Lacks the explosiveness to protect the paint as a help-side defender

Outlook: Chiseled center who looks the part currently more than anything. Will have some adjustments to make defensively in college. Will need to continue to improve his skill-level and feel for the game, but at just 17 years old has plenty of time to do so.

Strengths:
-7-0 wingspan
-Has improved his frame. Carrying more weight in upper body
-Very good athlete. Springy with a quick second bounce
-Can make a mid-range jumper. Big, long and athletic enough to rise up over the top of a defender to get his shot off
-Handles ball effectively in transition
-Very good first step
-Can drive and dish
-Can face-up drive and finish off the glass in the half-court
-Makes some creative passes to teammates
-Plays with great energy. Outquicks and outworks guys
-Gets on floor for loose balls
-Great anticipation skills getting in passing lanes for steals

Weaknesses:
-No real consistent means of scoring in the half-court
-Wants to post up but not strong enough yet
-No right hand finishing around the basket
-Not a consistent shooter. Elevates too high and shoots ball on way down
-Advanced ball-handling skills still a work in progress

Outlook: Has improved his physique and seems to be working on his shooting mechanics. Still not an overly skilled player but finds ways to contribute with his athleticism and terrific intensity on defense. Must continue to hone his jumper to make the transition to playing on the wing full time in college and eventually the pros.

Weaknesses:
-Looks a little more athletic than he actually is. First step is good but not great
-Struggles to fully beat opponents off the dribble
-Likes to get his shoulder into the defender and power his way to lane. May not work as effectively at college level
-Doesn't show great lift elevating around the basket in the half-court unless he has a head of steam
-Must continue to improve the consistency of his jump shot
-Awareness defensively is average, particularly off the ball.

Outlook: Declassified this year to return to his original class of 2013. A power wing with tremendous strength and solid scoring instincts. Interesting prospect if he continues to develop his skill-level.

Strengths:
-Nice size for a wing
-Good frame
-Solid athlete
-Excellent shooter. Strong mechanics. High release point. Can make shots with feet set or off the dribble
-Makes the extra pass. Appears to have a solid feel for the game

Weaknesses:
-Somewhat one-dimensional
-Not much of a ball-handler
-Takes a lot of tough contested jump-shots
-Doesn't always try very hard defensively. May not be the toughest guy in the world

Outlook: Wing player with good size and scoring instincts. Needs to continue to round out his offensive skill-level and find a position defensively at the college level.

Strengths:
-True low post presence
-Incredibly strong
-Extremely long wingspan
-Huge target inside with length and huge hands
-Establishes position inside the paint at will and moves opponents around
-Draws a ton of fouls by simply forcing opponents to try and contain him from catching the ball directly underneath the basket
-Not a high flyer but can intimidate around the rim with sheer length

Weaknesses:
-Very out of shape. Has gained substantial weight in the past six months
-Lack of conditioning affects him in every aspect of the game
-Doesn't ever step outside the paint defensively
-Struggles to score unless he can simply overpower opponents or draw fouls
-Doesn't have much in the ways of footwork or post moves
-Struggles to make free throws
-Runs floor lackadaisically. Effort looks questionable at times
-Team doesn't do a great job getting him the ball inside, and sometimes that frustrates him
-Bad body language when things don't go his way

Outlook: Extremely rare physical specimen with a rare combination of strength, length, soft hands and touch. With that said, stock seems to be dropping as he appears to have let himself go somewhat since the last time we saw him, while his skill level seemingly hasn't improved much. Conditioning will need a lot of work to be ready to compete at the ACC level, particularly defensively. Has the type of body that can get out of shape easily. Conditioning could be a problem for the rest of his career unless he really dedicates himself. Must continue to develop his skill-level and not simply rely on his tremendous girth.

Strengths:
-Powerfully built. Looks like a NFL linebacker. Huge upper body
-Long arms
-Good athlete
-Solid skill-level
-Makes the extra pass
-Can hit an open jumper with feet set
-Can get to the basket in a straight line
-Great potential as a defender and rebounder

Weaknesses:
-Questionable decision making
-Doesn't know how to take advantage of his strength advantage
-Looks somewhat passive at times
-Rigid shooting mechanics
-Shoots a lot of pull-up jumpers
-Needs to continue to improve his ball-handling skills in the half-court. Handles the ball primarily to hunt for a pull-up jumper

Outlook: Physically developed prospect who looked intent on proving his perimeter skills at the HoopHall Classic. Shows solid versatility with his ability to shoot, create and defend, but was unable to put it all together in the game I attended.

Strengths:
-6-11 wingspan
-Excellent frame
-Big time competitor
-Very physical player. Uses body well
-Runs court very hard
-Very good rebounder on both ends of the floor
-Likes to play inside the paint. Posts up aggressively
-Can make a mid-range jumper with range out to 17 feet
-Can attack his defender off one or two dribbles from perimeter
-Good feel for the game. Solid passer. Not selfish
-Willing to do the little things. Steps in for charges. Competes on defense

Weaknesses:
-Good not great athlete
-Doesn't have much of a back to the basket game
-Needs to improve left hand
-Average free throw shooter
-Struggles when forced to step out to the perimeter defensively

Outlook: Underrated prospect. Perfect for the college game. Much better than a low-end top-100 prospect. Has good size, strength and length for the power forward position. Does all the dirty work, but also has some budding skill which gives him nice upside to grow into at the 4. Big enough to play some center in the Big 12.

Strengths:
-Quick first step
-Strong ball-handler
-Good footwork and body control
-Very advanced skill-wise for his age
-Excellent shooter with feet set or off the dribble
-Can come off screens
-Elevates high off floor creating sharp separation from defender
-Super quick release
-Terrific on pick and roll
-Uses both sides of the floor nicely. Finds open man spotting up every time
-Uses floaters in the lane

Outlook: Skilled and smart lefty who can create for himself and others. Better athlete than he gets credit for. Will serve a two year LDS mission in Germany starting in April and return for the 2015-2016 season with four years of eligibility. Should be a major weapon for BYU when he returns. Brother of former BYU guard Jackson Emery.

Strengths:
-Good size
-Excellent frame. Very developed upper and lower body
-Solid length
-Very good athlete. Runs floor well. Plays above the rim with ease
-Can make a turnaround jumper in the post
-Uses fakes in the post. Gets defender up in the air
-Soft touch around the basket
-Can make a mid-range jumper
-Active on offensive glass

Outlook: Big man with a strong frame and solid athleticism. Not incredibly polished offensively, but shows some budding skills that can be harnessed into consistent production. Will reportedly play one year at BYU before leaving for his two year LDS mission.
Read Next...