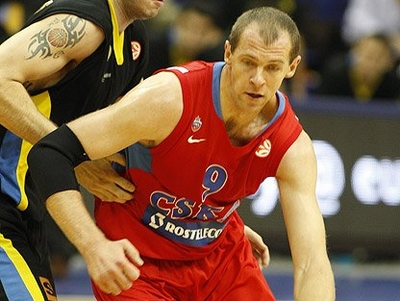 Jonathan Givony
@DraftExpress
The following European players have probably reached the point in their career where it might be too late to justify coming or returning to the NBAeither from their perspective, most NBA teams, or both. Weve thus decided to remove most of their names from the list for now, even if its obvious that were talking about some of the best players in European basketball here. The ones who remain on the list are marked with an asterisk.

Part Three: Not Getting Any Younger- Europeans

Never considered the most athletic player in the world, even in his prime, Siskauskas appears to be on the downside of his career at this point. There is no question that he could have been a significant contributor had he made the NBA 2-3 years ago.

Nachbar could have and likely still could play in the NBA if he were willing to take a minimum contract. Hes after all a proven player who still has a lot to offer as a skilled combo forward. Thats why he'll remain on this list despite the fact that he turns 30 this summer.

Reyes has been one of the best power forwards in European basketball for years now, and is a cornerstone of the Spanish national team. There is no doubt that he could have been a significant rotation player in the NBA in the right situation, but it doesnt seem like he has all that much interest in leaving the comforts of his home country. Its arguable how much effort NBA teams put into convincing him against that, though. Were keeping him on the list because hes still only 29, and his contract with Real Madrid does expire this summer.

There is a significant debate regarding how Diamantidisarguably the best point guard in Europewould be able to translate his very unique style of play over to the NBA. Its a moot argument, though, as hes repeatedly stated he has absolutely no interest in leaving Europe.

Rakocevic flirted with the idea of returning to the NBA this summer, but ultimately was unable to turn down the significantly larger contract offers he had on the table. Hes now in the first year of a 3-year, 8.5 million dollar contract with Efes Pilsen. It should be mentioned that hes having a fairly miserable season compared with last years amazing campaign, but part of that likely has to do with the fact that hes seeing more minutes at the point and is playing for a much worse team.

After leaving the NBA following a pretty successful run with the Phoenix Suns, Giricek has done a whole lot of nothing for Fenerbahce Ulker, struggling with injuries and looking largely mediocre in the times that he was able to step on the court. At this point the NBA cant be more than just a fond memory for him.

Smodis was a clear-cut NBA caliber player in his prime and always been known as one of the toughest matchups in European basketball, a true mismatch nightmare. Injuries have really taken their toll in a significant way the past few years, though, to the point that its nearly impossible to envision him making the leap over the ocean at this stage of his career.

We fell in love with the combination of athleticism, perimeter shooting and fundamentals that Drozdov brings to the table on one of our European scouting trips back in late 2007, which took us to the beautiful city of Kyiv. Since then, Drozdov hasnt enjoyed quite the same form he did that season, suffering some nagging injuries and being forced to leave BC Kyiv due to ongoing financial problems they (and all of Ukrainian basketball) were dealing with. Although the NBA doesnt appear to be as much of an option as he nears the tender age of 30, its a bit surprising that no big team in Spain or Western Europe decided to snatch him up, as he clearly still has plenty left in the tank from what we can gather.

Kaukenas was never really considered a very hot name amongst NBA types, not when he graduated from Seton Hall in 2000, and not when he was burning up the nets in the most efficient manner possible while averaging 15 points per game for one of the top teams in European basketballMontepaschi Siena. Now hes 32, and fresh off signing a two year contract to play for Ettore Messina in Real Madrid. Hes probably never going to play in the NBA, but we doubt he has any regrets.

A rare case of a big man who has improved his game considerably every year despite being on the wrong side of 30, Ndong is a model for African prospects everywhere to look up to and emulate. Hes a tireless worker with a nice basketball IQ who competes on every possession and is highly unselfish. He got a fat three year contract this summer to move from Malaga to Barcelona, spurring some NBA interest along the way, and thus at the age of 32 we can probably officially close the book on his NBA career.

An All-Euroleague player for a number of years now, its a pretty safe bet to say that if Lavrinovic hasnt been signed by an NBA team at this point, he probably wont ever be. A fairly athletic big man with a terrific stroke and all kinds of scoring ability, Lavrinovic is a guy who could have been interesting as a spread-four in the NBA. Unfortunately no team ever really showed all that much interest according to what his agent told us in the past.

Garbajosa had a really nice run in the NBA playing in Toronto in 2006/2007. Unfortunately for him, and the Raptors, he suffered a serious injury that knocked him out of most of the 2007/2008 season, and then compounded the issue by insisting on playing for the Spanish national team, which seemed to further aggregate the injury. Eventually reached an agreement with Toronto to terminate the last year of his contract, and Garbajosa limped through a pretty unimpressive 2008/2009 season in Russia with Khimki, despite being paid 3 million Euro for his efforts. This summer Garbajosa moved to Real Madrid to join forces once again with Ettore Messina, and finally appears to be close to returning to his pre-injury form. Turning 32 later this month, though, its probably safe to say that the NBA chapter of Garbajosas career has come to a close.

Other European basketball stars who would likely receive consideration if they were younger or showed an inclination to accept a minimum contract:

Vassilis Spanoulis- Although only 27 years old, Spanoulis lone season butting heads with Jeff Van Gundy in the NBA was likely so traumatic that its difficult to envision him returning anytime soon.

Sarunas Jasikevicius- Turning 34 in March, and one of the best paid players in Europe, Jasikevicius surely still has a desire to prove that he could have been a better NBA player than what he showed in Indiana and Golden State, but that has to be considered incredibly unlikely at this point.

Theodoros Papaloukas- Although he continues to get it done at the highest level of European basketball, Papaloukas is turning 33 this season and didnt really have the type of game that would have easily translated to the NBA anyway.

Nikola Vujcic- Vujcic surely would have made a fine NBA center back in his prime, but his age has caught up to him quickly and hes now only seeing about 13 minutes per game these days.

J.R. Holden- Not exactly a true European except for his handy Russian passport, Holden is 33 and still raking in huge money from CSKA Moscow, despite them slashing their budget substantially this summer. His style of play actually could have fit in quite well in todays NBA, if he were only a little younger and more likely to accept a significant paycut.

Darjus Lavrinovic- Ksistofs twin brother didnt appear on our list last year, as he was returning from a serious back injury and looked extremely limited for most of the season playing for Dynamo Moscow. Now hes playing for Ettore Messina in Real Madrid and having what appears to be the best season of his career. The problem is that hes 30 at this point and still has another year on his contract (a team option) after this, meaning we can only probably wonder what if.

Jaka Lakovic- Although hes in the last season of a 3-year contract, the NBA doesnt look very realistic for Lakovic anymore considering that he turns 32 this summer and has seen his playing time with Barcelona reduced as of late.
Read Next...