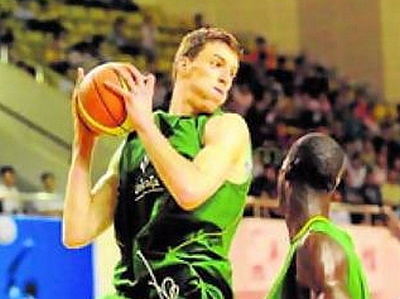 Flying largely under the radar playing in the Spanish LEB Gold (second division), and throughout his career for that matter, big man Ognjen Kuzmic is a prospect that is beginning to generate some minor buzz in scouting circles, whether by proxy when NBA teams have scouted some of his talented teammates or thanks to his impressive size and productivity this season. 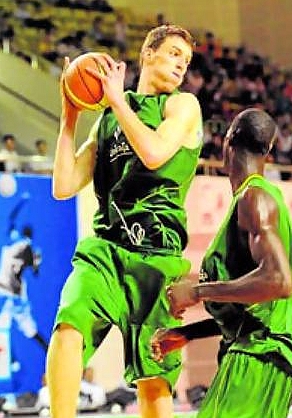 Listed at 7'1, 231 pounds, Kuzmic looks every bit of 7-feet and has a terrific wingspan to go along with a strong work ethic on both sides of the floor. While he might not have the explosiveness to throw down tip-dunks from the weakside or power his way above the rim from a stand still due to a lack of lower body strength, the native of Bosnia is a good athlete for a European 7-footer who proves to be surprisingly nimble for a player that size, often showing quick feet hedging the pick and roll and finishing above the rim after hustling up the floor. He still needs to gain a considerable amount of weight, but is still able to make an impact in the LEB Gold with his solid motor. The 1990-born prospect has already added some muscle to his frame in recent years and has a nice framework to build upon, but has a long ways to go in terms of strength and polish.

Coming from a fairly unique basketball background, Kuzmic started his career in his native Bosnia before spending parts of the next three seasons playing in both the first and second divisions of Finland, the country his family found themselves living in during and after the war in their native land. Emerging as a solid contributor at the age of 19 in the Finnish second division, Kuzmic returned to Bosnia at 20 last year and ended the year averaging 9.7 points and 7.3 rebounds for Celik Zenica. Discovered and signed by Unicaja Magala this past summer, Kuzmic has been following a promising learning curve in recent seasons despite his relative inexperience on the international stage (he's never been invited to any of the Bosnian national teams) and against high-level competition, and will be automatically eligible for the 2012 NBA Draft.

A key player on a roster dotted with younger international prospects such as Malick Fall and Maodo Nguirane, Kuzmic plays with Unicaja Malaga's second team, Clinicas Rincon, which currently sits last in the LEB Gold with a 4-19 record. Kuzmic has had the opportunity to practice with Unicaja's first team while playing extensive minutes with its counterpart in the second division. Though two other players in somewhat similar split-time situations, Alex Abrines and Augusto Lima, have seen more significant action in the ACB, Kuzmic has played essentially the entire season with Rincon apart from his 23-second debut for Malaga against Gran Canaria on opening day.

Averaging a solid 16.9 points per-40 minutes while shooting a respectable 53% from the field, Kuzmic is Rincon's primary interior threat and one of its leading scorers. With his team often playing with different rotations on a nightly basis depending on who is playing up with Unicaja at the time, Kuzmic sees his usage fluctuate game-to-game, but he has been quite possibly the club's most consistent contributor around the rim offensively.

Kuzmic is not a polished offensive player by any stretch, but has had some strong outings, including games of 22 and 17 points this season. Although he lacks a degree of polish and coordination around the rim, he makes his presence felt regularly inside the paint at this level. Despite his relative lack of strength, he does a very good job fighting for position on the block and uses his tremendous length and high motor to crash the offensive glass and create easy looks for himself with his hustle. Pulling down an excellent 5.3 offensive rebounds per-40 minutes, the young center is active on the boards.

When it comes to scoring the second chance opportunities he creates for himself, or the other finishing opportunities he sees around the basket, Kuzmic is a mixed bag. He shows decent touch around the rim, and while he's not afraid to take contact, he struggles to finish through it, is not explosive in a crowd, and simply has quite a few of his shots narrowly rim out. He'll finish plays with dunks when he has space and has shown developing finesse scoring moves, but is still learning how to make the most of his touches at the rim.

As a one-on-one scorer, Kuzmic faces similar challenges as he does as a finisher. He sees a significant number of his touches in post-up situations where he is creating his own offense, but appears mechanical and lacks consistency. It's clear that he's spent a significant amount of time working on this aspect of his game, but is still in the early stages of his development here. His footwork is not poor and he uses a soft, left-handed hook shot as his go to move on both blocks despite the fact that he is right-handed. On occasion, he even shows some potential away from the basket as a jump shooter, albeit inconsistently in a limited sample. Overall, Kuzmic is not a polished or consistently productive offensive player, but has some promising basic tools for a player still very early on in his development.

Defensively, Kuzmic is an impact player in the LEB Gold, blocking 3 shots (#1 in the league) and pulling down 8.1 defensive rebounds per-40 minutes, reminding somewhat of Fran Vazquez with his approach on this end of the floor. Coupling his size and length with his consistent energy level, Kuzmic is a threat to block shots on the ball and on the weakside, showing especially good anticipation and timing on occasion en route to leading the league in blocked shots. His instincts as a shot-blocker appears to be his most promising trait, and is certainly a skill that is in demand amongst NBA teams.

Often sitting in the center of his team's zone, Kuzmic is not often asked to defend away from the basket, but he has fared relatively well when he has had to, surprising shooters with his length as he steps out to contest them. Managing to block quite a few midrange jump shots, Kuzmic leaves his feet whenever he closes out a shooter, and though his competitiveness and desire to contest shots is promising, his lack of fundamentals away from the basket is abundantly clear.

To take the next step defensively, the center will need to improve his ability to deal with stronger players in the paint, as he already struggles with post-oriented scorers who are able to seal him and back him down at this level.

Considering that he has not yet seen significant action in the ACB, Kuzmic is not a terribly well-known commodity. His level of competition is certainly a concern, but considering the leagues he played in early in his career, LEB is a major step up for the young Bosnian, and his productivity is indicative of his promising set of tools on both ends of the court. In one of the weakest automatically eligible crops of international prospects in recent memory, a player like Kuzmic could be a candidate for teams look for a low-risk, high-reward draft and stash prospect in the second round, as he's seemingly earlier in his development than many other players his age. He is currently playing under a 3-year contract with easy outs for the NBA or another European club.
Read Next...