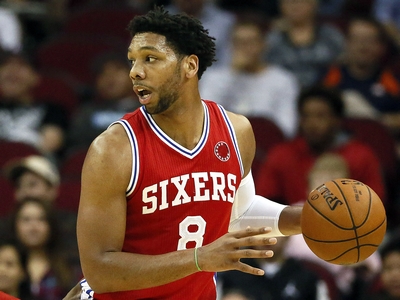 Eric Weiss
@DraftExpress
By Eric Weiss & Kevin O'Connor  Sports Aptitude
In our previous installment of Opportunity Knocks we covered our new metric, SA PLUS/MINUS, which is essentially a measure of player adaptability independent of the situation they are placed in. This is objectively calculated using our Personality Factor model.More From Sports Aptitude
-Opportunity Knocks: The Pluses and Minuses of Success
-The DeAndre Jordan Rules
-DeMarre Carroll's Long and Winding Road to Stardom
-The Unbearable Lightness of Patrick Beverley
-Everybody Loves Draymond Green
-Jimmy Butler's Rise to Stardom
-How Situation Impacts Success, Part Two
-How Situation Impacts Success, Part One
-The Thin Line Between Busts and StealsSA P/M is an all-encompassing soup of the measurable traits of the NBA's best and brightest in the Sports Aptitude database  Work Ethic, Sense of Urgency, Accountability, etc.  all rolled into the dreaded single metric. You can read more about SA P/M here.

The boys in the lab vetted this metric against a series of performance indicators  Minutes Earned, Production per Minute, etc.  running regression and discovering a strong correlation between opportunity, performance, and SA P/M. 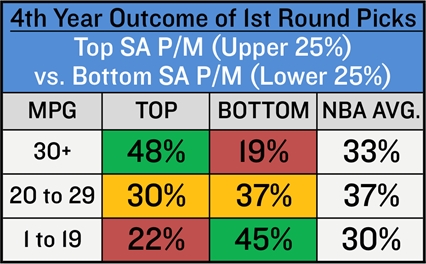 However, player adaptability only tells half the story. The fickle nature of Nature vs Nurture logically necessitates a more nuanced knowledge of the Situation Factors needed to succeed, (let that knock around your noodle.)
Attempts at humor alone are unlikely to make this material easier to digest. The links above are exhaustive in detail and large in scope. Even for those readers currently flushing $50K a year away in student loans on an undergrad psych degree, all of this is a lot to take in.

In light of this, we will narrow our focus on two specific principles  Social Status and Social Conformity  and see what the numbers tell us when it comes to how SA P/M plays out.

WHAT'S YOUR STATUS?
Achieved Status is a position that one earns from merit. It reflects the skills and abilities of the individual and is a reflection of their past accomplishments. Ascribed Status is the position one is assigned to regardless of past history, being neither earned nor chosen by the individual.

In laymen's terms, Social Status influences how a player interprets the opportunity he gets relative to what he's done in the past. Adding high school recruiting rankings (RSCI) into this equation starts to paint an even more interesting picture when we're comparing the success of Top and Bottom rated SA P/M lottery picks.

Lottery picks tend to go to Suck-Bag teams. We define this sophisticated term more acutely in our O.D.I.E.A methodology by quantifying Group Cohesion, Organizational Direction, and Performance Standards. For the purposes of this article we'll simplify this equation: Suck-Bag Team = Win/Loss%

The average WL% for Top SA P/M lottery players is 39.8% while Bottom SA P/M lottery picks celebrate their NBA indoctrination at 42%. Aside from the comically convenient rationale that winning percentage provides as an explanation for their struggles, Bottom SA P/M players actually start off in marginally better circumstances.

This is the point where the concept of Achieved vs Ascribed status collides with high school recruiting rankings, and how a player adjusts his expectations to fit the opportunities in front of him. Both groups of players have similar high school RSCI rankings, being Top 50 Recruits, as well as high draft picks. Bottom rated lottery players also enjoy a slight advantage in both minutes and usage as well.

So, to quote Jerry Stiller, what the hell is going on here?

To help answer this question we have to bring in one more social science concept into this equation.

Players with a high Achieved Status are very likely to have higher expectations for their opportunity and success at the NBA level  as anyone that's watched any video interview on DX well knows. However, the reality is, most players will not become impact players in their first year, and almost all of them will never have the same star power as they did in high school and college.

This is a tough blow to the ego of any young baller who has grown accustomed to the world revolving around their greatness for so long. This reality is further complicated for the cream of the crop who went from preps-to-pros riding the wave of elite high school recruit-to-elite college program-to-elite draft pick on a losing team in need of elite talent.

Suck-Bag team environments are typically stocked with similarly aged and/or experienced players or marginally productive and/or aging veterans who clearly don't factor into the long term projection of the team's direction. These transitional environments don't create nearly the same pressure to conform that more stable team environments do.

Therefore, more onus is put on the player to Self-Monitor his behavior while simultaneously managing the pressure of being a potential lottery savior for fans and media feeding the frenzy of expectations  a recipe for disaster for the ill-equipped twenty-year-old.

In this scenario, it easy to hypothesize that Top rated SA P/M players simply have better personality traits for adjusting to the realities of their situations. Higher accountability, lower self-assuredness, and more logically-based decisions are three key traits of Top SA P/M players that make a lot of sense when trying to figure out what it takes to check your ego at the door.

Conversely, Bottom SA P/M players tend to be more threat-sensitive, highly analytical, and have greater tension  traits that suggest they are more impatient when dealing with frustration and are much more resistant to leaving their comfort zones at a stage in their careers where embracing change can be critical for reaching their potential.

As stated before, there are far more layers to be peeled back. It's clear there are dramatically different Personality and Situation Factors at play for the successful development of both plus SA P/M and minus SA P/M success stories.

Treating these two groups of players as distinctly different entities and applying a different developmental model to each may be a crucial component to helping more players reach their potential.

There are, of course, many success stories in the Bottom SA P/M group as well as many failures in the Top SA P/M group. In our next article we are going to dig even deeper into the winners and losers within each of these groups to make more sense of things.

After all, Social Conformity can be a two-way street, where a Top SA P/M player can spoil by taking on the habits of a bunch of bad apples while a Bottom SA P/M player may be more resistant to those influences. And what if the Team Environment is reversed? What happens to these guys when team standards are high?

The balance between fitting out and fitting in is not as clear cut as it seems to be at face value. There are times when standing your ground is just as important as deferring to others  we'll look at these situations more closely next time. 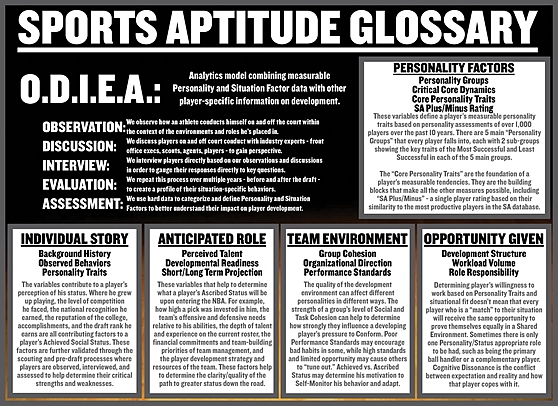