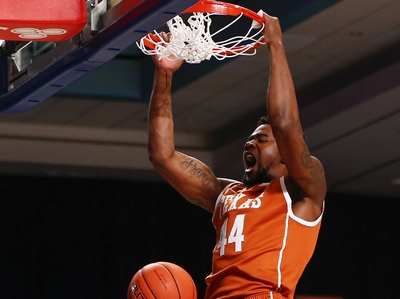 Mike Schmitz
@Mike_Schmitz
Prince Ibeh was largely invisible for most of this season, which is a major red flag for a four year NCAA prospect. But he seems to be turning the corner over the past five games, averaging 10 points, 7 rebounds and 4 blocks in 27 minutes. For a player who stands 6'11, with a 7'4 wingspan, an incredible frame and ideal athleticism for a modern day NBA center, that is always going to raise some eyebrows considering how difficult it is to find big men in his mold.More DX 2015-2016 Season Video Breakdowns
-Ante Zizic Strengths and Weaknesses Breakdown
-Wade Baldwin vs Kentucky Video Breakdown
Gary Payton II vs Kansas Video Breakdown
-Damian Jones vs Jameel Warney Head to Head Matchup Analysis
-Juan Hernangomez Strengths and Weaknesses Breakdown
-Malik Newman vs Kentucky Video Analysis
-Ben Simmons vs Kentucky Video Analysis
-Buddy Hield's 46 point Explosion vs Kansas
-Kay Felder Strengths and Weaknesses Breakdown
-Tyler Ulis vs Louisville Video Analysis
-Pascal Siakam vs Baylor Video Analysis
-Ben Simmons vs Henry Ellenson Head to Head Matchup Analysis
-Karl-Anthony Towns vs Kristaps Porzingis Head to Head Matchup Analysis
-D'Angelo Russell vs Emmanuel Mudiay Head to Head Matchup AnalysisWe wrote a lengthy piece in the preseason about Ibeh's strengths and weaknesses, and why he will be such an interesting player for scouts to monitor despite his lackluster production, and it is notable to see him start to put things together, as you'll see in the video below.

Consistency has always been Ibeh's biggest issue throughout his career, both on and off the floor, and it will be interesting to see how he responds to the added attention his strong play recently will garner. Can he continue to play with the type of energy and intensity he has lately, or will he go back to the underachieving ways we saw his first three and a half years in college?

From an NBA scouting perspective, one of the most intriguing games Texas will play all season came against Kansas ten days ago at Allen Fieldhouse in Lawrence. Ibeh put all of his strengths and weaknesses on full display there, scoring 7 points (3/4 2P, 1/4 FT) to go along with 7 rebounds, 7 blocks and 3 turnovers in 35 minutes.

Via Mike Schmitz, here's an eight minute video breakdown of some of the more notable things NBA scouts were able to see from Ibeh in that game, both good and bad, on either end of the floor.