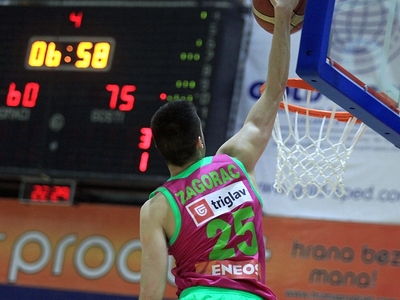 One of a number of intriguing wings among international early entrants for the 2016 NBA Draft, Rade Zagorac put together a very strong year for Mega Leks. Breaking his arm in the middle of the fourth quarter of the first game of the season, before fighting through the pain to finish the game with 16 points and 6 rebounds against a very talented Red Star team, Zagorac didn't play again until mid-January. Taking a few games to get back into the swing of things as a number of injuries and acquisitions had the roster around him in flux, the Belgrade native finished the year averaging an impressive 13.8 points, 6 rebounds, and 2.7 assists over 28.3 minutes per game, helping a young roster that features a number of other prospects to the Adriatic League finals and the Serbian League semis.

Born in Belgrade, Zagorac is one of the first of Mega Leks' many recent draft prospects to have played essentially his entire career with the club, making his Serbian League debut just after his 17th birthday during the 2012-2013 season, following a stint at the junior level. The talented swingman first emerged as a prospect with a strong showing at the Nike International Junior Tournament (now the adidas Next Generation Tournament) later that season, averaging 13 points and 5.5 rebounds per game.

After a solid showing at the 2013 FIBA U18 European Championship, Zagorac spent the subsequent season on loan with Smederevo, a smaller club in Serbia that does not compete in the Adriatic League. Pouring in 15.3 points over 33.5 minutes per game in his first season playing full time in the Serbian League, Zagorac returned to Mega last season filling a prominent role alongside Nikola Jokic and Nenad Miljenovic, faring particularly well in the Adriatic League with 10.1 points, 3.2 rebounds, and 2 assists per game.

Helping Serbia to an undefeated 10-0 record at the 2015 FIBA U20 European Championship last summer and solidifying himself as a prospect to watch in the process, Zagorac returned to a very different, but just as talented, Mega Leks team this season figuring to play an even more prominent role. Putting together an impressive individual campaign helping his club to its most successful season ever, Zagorac took another significant step forward in his development, putting himself in the mix, along with a half dozen other international players, to hear his name called at the end of the first round of the 2016 NBA Draft.


Standing 6'9 with an above average wingspan, the 20-year-old has terrific size for a wing at any level. Possessing nice speed and fluidity and far more explosiveness than one might expect on first glance, Zagoriac is a very good athlete who can continue to improve on this front as his frame improves. On the skinny side at the moment, tipping the scales around just 205 pounds, the blossoming swingman has plenty of room to gain strength, but there's plenty to like about his physical profile.

Finishing as the third leading scorer for Mega Leks behind Timothe Luwawu and Nikola Ivanovic, Zagorac took on a far more diverse offensive role this season than he had in the past. Playing mostly off the ball in the past getting more of his looks in transition or in spot up situations, a significant 38% of Zagorac's possessions this season came in isolation or pick and roll situations in 2016 according to Synergy Sports Technology. An improved ball handler and shot creator, Zagorac displayed impressive versatility this season, as a scorer and passer, even showing some ability in the post or running the point for a few brief stretches.

At this stage, there really is a lot to like about what Zagorac brings to the table offensively. He does the majority of his damage as a jump shooter, with attempts split evenly between spot up jumpers and pull-ups, most of which come when he's looking to create his own shot and not just taking what the defense gives him. Knocking down a passable 35% of his set shots, Zagorac is a capable 3-point shooter and his mechanics are extremely fluid, but a bit on the loose side and tend to break down under pressure. A below average jump shooter early in his career, he's shot 37% from beyond the arc each of the last two seasons showing marked improvement, but still has some room to develop as a floor spacer. In contrast, Zagorac knocked down a terrific 45% of his pull-up jump shots this season, up from 25% a year ago, often making shots impressively off of step backs or double-moves to create separation.

Zagorac's ability to create for himself is another promising aspect of his skill set that will undoubtedly intrigue NBA scouts. Pushing the ball himself in transition, attacking the basket after he gets downhill on the pick and roll with rangy strides, and showing surprising creativity with the ball going one-on-one, the talented young Serb looks very comfortable with the ball in his hands making plays not just for himself, but for others as well. He has been particularly effective in the pick and roll, where his ability to attack switches has consistently stood out this season.

Though Zagorac often prefers to pull-up when he puts the ball on the floor, he does a nice job getting to the rim as well. Very smooth with the ball in his hands, Zagorac lacks elite quickness, but he's very crafty, particularly in transition, and his handle and ability to change speeds help him turn the corner in the half court. Able to play above the rim when he has space, Zagorac shot an average 56% around the rim last season in the half court, as his lack of strength and speed often allowed defenders to recover and challenge his shots inside, leading to mixed results. He'll face a steep learning curve translating his ability to create as prolifically as he has in the Adriatic and Serbian Leagues to the NBA level, but the fact that he is far from a one-dimensional prospect gives him a lot of appeal as a role player considering his physical tools.

There's more to Zagorac's offensive game than just his ability to score the ball, as he's proven to be a decent passer this season, particularly out of the pick and roll. A bit turnover prone as he is still getting his bearings as a ball handler and decision-maker, telegraphs some passes, and doesn't have the tightest handle, Zagorac nonetheless proves to have solid vision and a very unselfish approach to the game.

Defensively, Zagorac has much more to prove. Though he plays hard, stays engaged, shows good feet, and uses his length to get in the passing lanes, his lack of strength limits his ability to hold his ground in the post and when trying to deny penetration on the perimeter as well. He also tends to over-help and reach a bit too aggressively, although some of that can be attributed to Mega Leks's very aggressive pack-like style of defense on that end. Highly competitive, Zagorac nonetheless has a long way to go defensively and lacks a degree of lateral quickness for the next level, but already makes some plays by virtue of his effort on the glass and getting deflections.

One of five prospects from Mega Leks currently listed in our top-100, teams are intimately familiar with Zagorac, even with the amount of time he missed with injury, as the club frequently drew top NBA decision-makers when they took the trip across the pond. Playing exceptionally well at times this year, the 20 year old has very interesting upside to go along with nice intangibles. His stock could rise as teams get a closer look at his in workouts as he jockeys for position in the back half of the first round or the beginning of the second.
Read Next...