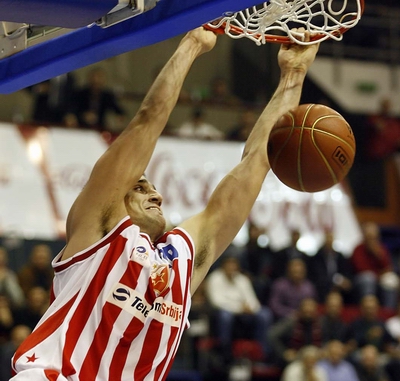 Luis Fernández
@DraftExpress
Were back after the summer break. Most European domestic leagues are up and running, and the Euroleague and the other pan-European competitions just wait around the corner. Our first player of the week is Tadija Dragicevic, who is enjoying an impressive season start for Crvena Zvezda in the Adriatic League. Still, much of the spotlight went this week to Sergio Llull and his very productive showing in the NBA Live Tour as his team Real Madrid upset the Toronto Raptors. He surely made a name for himself in the NBA draft world.

Its not every day that you see a draft-eligible player dropping 30 points on a Euroleague team, but it happened last week as Tadija Dragicevic led Crvena Zvezda to a victory over Cibona Zagreb. It was the highlight of an impressive early run that leaves him averaging 21 points and 5.3 rebounds four games into the season, helping his team to a solid 3-1 record in the Adriatic League.

Not an extremely intriguing profile indeed, but still Dragicevic should be able to make a good living in Europe. After all, and even in exceptional cases, guys with a comparable physical resume as Matjas Smodis or Jorge Garbajosa show how unexpectedly far can a physically-limited player can get when he puts everything else together perfectly.

No other prospect enjoyed more exposure NBA-wise this week than Sergio Llull. Its the advantage of playing a real NBA team and performing extremely well. He made sure everybody remembered him by netting 17 crucial points that greatly helped Real Madrid to upset Toronto Raptors during the NBA Live Tour.

The Spanish point guard played a fearless game, taking and making his open shots, running the court aggressively, delivering some nice passes and playing solid defense against the very quick NBA guards. What particularly makes him an intriguing case is his excellent athleticism, which will allow him to translate his game to more physically demanding competitions (such as the NBA).

At 6-3, Llull nicely fills the bill in terms of physical build, as he shows a good frame, with an already strong body considering his age. A promising ball-handler, still noticeably better with his right hand, his ability to dribble the ball doesnt limit his athletic gifts (for example, he can handle the ball at full speed). Enjoying the quickness to regularly beat his opponents, he can also knock his perimeter shots when he enjoys space, which makes for a really nice combination. However, hes not that active and effective taking his match-ups off the dribble, and despite his excellent three-point run against the Raptors, still emerges as a streaky guy with his jumper, also needing to work on his release off the dribble.

An aggressive player, active and fearless, Llull doesnt always manage to stay under control, sometimes overdoing things and getting himself into trouble in the process, showing questionable decision making. He can come up with nice passes, entries from the perimeter or kick-outs off the drive, but his distribution and ability to establish a rhythm for his team still needs to seriously improve. Hes still an inexperienced playmaker, and actually is getting most of his minutes with Real Madrid at the off-guard position, but he has the makings of solid point guard. A friendly game like the one he played against the Raptors was a perfect stage to showcase his strengths, playing transition ball where his athletic attributes can shine, and enjoying loose defenses that allowed him to operate comfortably.

2646
Llull came back to Earth just a few days after, facing a real defense in the ACB League against Tau Vitoria. He committed 4 turnovers in less than 4 minutes of playing time, to some extent probably a result of his anxiety to meet expectations after his brilliant showing against the Raptors.

Anyway, Llull has shown great progress in his development over the last few years. In 2004 he was the third point guard, basically a bench warmer, on the Spanish Junior Squad that conquered the European title. Growing taller, stronger and more experienced, he made strides on the National Team (being an important piece in last summers U-20 silver-medalist Spanish team for example), while also getting burn in the rather demanding Spanish second division. He was becoming an interesting player to watch, and we did cover his signing for Real Madrid in the past spring, as well as his selection for the Treviso Camp. Hes now on an ACB and Euroleague team, while everything points towards him seeing regular minutes on the court. If he keeps improving, theres no reason why NBA teams shouldnt take him into account for the draft. He has the physical tools, some nice talent, and apparently the character and work ethic to put everything together.

Ricky Rubio is so far taking that step ahead that his team needed from him considering the new configuration of Joventuts backcourt. Hes gaining aggressiveness on the offensive end, taking more decisions and scoring responsibilities, and actually making pretty good use of his newly-improved shooting stroke. With two games into the ACBs regular season, hes averaging 11.5 points, 4 assists and 3.5 steals. Beyond the numbers, hes a crucial piece--one of the primary engines--on the hottest team of the competition: after winning both games by a wide margin, Joventut tops the ACB standings.

Vladimir Stimac is off to a spectacular statistical effort in the Baltic League facing the toughest possible opponents. Hes averaging 18.8 points (with near 60% of accuracy from the floor) and 10.8 rebounds after playing Zalgiris, Lietuvos Rytas, ASK and Ventspils. Logically, his team Valmiera lost against the first three, but could come away with a victory against Ventspils.

Nathan Jawai has become one of the biggest surprises of the season. A rookie in the NBL out of the Australian Institute of Sport (AIS), despite having been born in 1986, this seven footer is tearing up the Australian league with averages of 19 points and 9 rebounds through the first six games of the season, as his team Cairns Taipans stands with a very respectable 4-2 record. Expect to read more about him in the coming weeks, as soon as the DVDs land.

Nenad Mijatovic still hasnt been able to shake off labels such as poor distributor, poor decision maker, plays out of control, or streaky shooter that have been defining his game perhaps for too long now. His early run this season doesnt impress statistically, averaging 6 points and only 0.5 assists in more than 16 minutes. Thats not good news. Hes taking too many bad decisions, forcing plays, rushing things, not controlling the game. Hes not a reference on court his teammates can trust on. Hes not playing smart basketball. Mijatovic is still a great talent with superb tools to play the point, but were really eager to see some maturity in his game.

While Albert Moncasi has earned a spot on AXA FC Barcelonas roster for this season, hes not expected to see much action. The Spanish powerhouse is a deep and very talented team, with high expectations to meet this season. However, this weekend he did enjoy a few minutes as his team was routing MMT Estudiantes. Enough time to check that coach Ivanovic is using the 6-10 youngster as a small forward (apparently hes doing it in practices as well). The few times we saw Moncasi n the past, either with the U-20 National Team or in LEB-2 with Cornellá, he filled one of the two inside positions and didnt show much of a perimeter game, so it really comes as a surprise. Hes quite a gifted player in terms of physical and athletic set, enjoying good mobility, nice leaping ability and a very promising frame. In this game, he struggled a couple of times in situations related with his position on court, committed a travelling violation on a slashing attempt and suffering with his lateral quickness on a defensive situation against a smaller wing. Anyway, this is an intriguing situation involving a guy with nice potential, definitely worthy to keep track of.

It was a bittersweet weekend for Serge Ibaka. Finally cleared to play after some bureaucratic issues, he made his debut in the LEB league with a 10-point 12-rebound double-double, although it ended up being the first loss for his team LHospitalet. Anyway, as reported by El Periódico de Catalunya, exactly one day after that first game, FIBA revoked Ibakas transfer, so hes again unable to play professional basketball. Apparently, both LHospitalet and Prissé-Mâcon, the French team that brought him to Europe from Africa, are fighting for Ibakas rights. LHospitalet is reportedly offering 30,000 Euros to solve the situation, but the French squad seems to be asking for 150,000. This sad situation only adds more uncertainty and mystery over a guy who already had enjoyed very little professional exposure up to date.
Read Next...