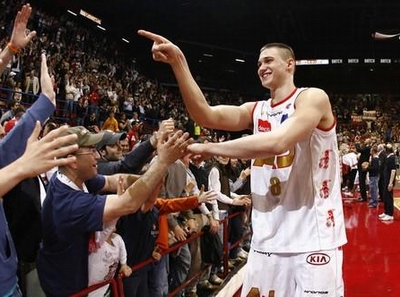 Luis Fernández
@DraftExpress
A superb week with back-to-back 18-point performances for Danilo Gallinari fuelled his team in the last week of the regular-season surged his team into the second berth of the Italian league playoffs. Not only does he get our Player of the Week nomination, but the expectations for his post-season performances could hardly be higher. Besides the Italian gem, Rudy Fernández and Milos Teodosic also shined this week. Finally, dont miss some quotes by Ricky Rubio, who made a rare appearance in front of the press these past days.

Player of the Week: Danilo Gallinari

It was a very close race, but after three consecutive victories to close the regular season, Armani Jeans Milano surged into the second position and home-court advantage in the Italian playoffs until the Finals. Some of the credit has to go to Danilo Gallinari, who led his team in plus/minus stats in both games played this past week, having 18 points and 3 rebounds against Bipop Carire Reggio Emilia, and 18 points, 5 rebounds and 2 steals in the crucial showdown against Lottomatica Roma.

Is Gallinari an athletic player? Will he be able to make the transition to the NBA? These are not easy questions to answer. To start with, this very skilled Italian forward shows different levels of athleticism depending on the situation he faces. Particularly, he doesnt seem to be very reactive. It takes him a while to get in motion. This is related to the fact that his vertical leap from a standstill position looks rather poor. Also concerning this flaw is his limited activity on court: hes not this kind of hyper-energetic guy who is all over the court and always ends up with loose balls. Thats why he probably isnt a great rebounder despite being a very smart player with an excellent physical set.

2180
On the other side of the spectrum we have his surprisingly good lateral quickness. Actually Gallinari is one of the few guys you can see consistently defending any player on court from the point guard to the power forward position, which is really impressive. His length and defensive quickness are a very tough match-up for any perimeter player, while he enjoys enough size and strength to challenge power forwards. Particularly his defensive flashes are sometimes spectacular, immediately flashing in front of the dribbler who tries to take advantage of a screen. Its also important to note that his leaping ability dramatically improves when hes running, so he can finish above the rim after a drive.

Then we have how Gallinari makes the most out of that controversial athleticism. Its particularly remarkable how he can beat his match-ups off the dribble on a regular basis. He might not be very reactive, but his first step is very nice, his strides long and difficult to keep up with for his defender, his footwork excellent to slalom towards the basket, and his body control effective while using his width and strength to keep his opponents away from the ball.

Its fascinating how much Gallinari reminds of the great Dejan Bodiroga (length and perimeter skills, poise, basketball IQ, ability to beat their opponents despite their questionable quickness, low-post game), which by the way doesnt help much in terms solving any doubt about his NBA potential. Still you have to believe that a major basketball talent usually breaks through. And its not like this kid doesnt enjoy some terrific tools to help his cause.

Milos Teodosic delivered back-to-back excellent performances to lead his FMP team to the victory in both games celebrated the past week in the Serbian SuperLeague. He had 18 points, 8 assists and 2 steals against Mega Ishrana, and continued with 18 points, 2 rebounds, 7 assists and 2 steals in the very important on-the-road win against Crvena Zvezda.

Rudy Fernández finished the ACB regular season in spectacular fashion, leading DKV Joventut to victory over Real Madrid with 18 points, 6 rebounds, 8 assists and 2 steals. He was incredibly active, very secure from the long-range distances, and showed superb decision making while dishing out the ball. His final rush in the league has been rather impressive, averaging 20.6 points, 4.1 rebounds and 4.3 assists in the last 7 games. Particularly, hes now perfectly combining his scoring power and his passing ability. In the ACB campaign, Rudy has ranked third both in scoring (16.3 ppg) and efficiency, as well as second in steals per game (2.2). For a 22 year-old player in the strongest domestic league in Europe, this is pretty amazing.

Marko Tomas closed a very average season with a very poor game against DKV Joventut. He only scored 1 point in 10 minutes, committing 4 turnovers. In the last 14 games of the regular season, he has only averaged 4.2 points. Very poor production from the former leading scorer of the Adriatic League. His chances of landing a spot in the draft are rather small at this point. Its not only about his mediocre production, but the feeling of limited potential he transmits. The best things we can say about him is that he has worked quite well on the defensive end, but in terms of offensive power, he needs to either be open to shoot the ball or enjoy plenty of space to slash in order to be effective. After all, hes still a slow player with the ball in his hands.

Ricky Rubio has finally spoken! It was during a presentation ceremony for the ACB playoffs, an exceptional occasion where he broke his rule of not speaking to the press. Here are some interesting quotes:

I play basketball and go out to the court to enjoy; the age I have doesnt matter. Either people care or not about my birth date, I dont care. I still will be enjoying the game, which is what makes me a better player. The day I stop enjoying, it will be the day Ill give up basketball. I never feel under pressure.

My horizon is right now the ACB playoffs. I dont look beyond. In the summer I will be, I guess, with the Junior National Team. After the summer, Ill come back again with DKV Joventut. Right now, the future is too far away.

The key to getting so many steals is the intuition, but even more the eagerness and ambition. Its instinctive, but the ambition is what makes the difference.

As I grow old I want to study and play basketball. When I finish high school I will think about a degree to study.

At first I used to look carefully at who was my rival, especially against important players. Now Ive already lost the fear.

I have to improve everything. If there was an aspect of my game that I didnt need to improve, then I would be the best player in the league. Theres always something to learn because when you think you know everything, then you dont improve anymore.

I dont even play in the National Team, so go figure (how far is) the NBA.

By the way, according to the El Mundo Deportivo, Ricky already has an NBA agent, Dan Fegan.
Read Next...