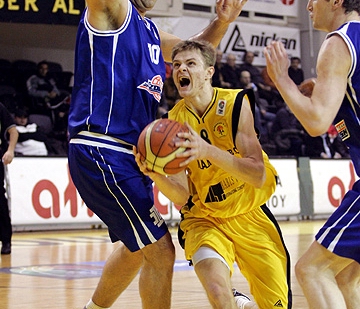 Luis Fernández
@DraftExpress
Right when his team needed him most, Renaldas Seibutis stepped up to help Maroussi clinch a playoff berth in the Greek League with a 20-point performance. In the process, he earned our Player of the Week nomination. The NBA draft's early-entry list is the hottest topic these days, and on the international front DraftExpress has recently learned about Nikita Shabalkin and the Ivanov twins testing the waters.

Player of the Week: Renaldas Seibutis

It was a crucial week for Maroussi, and a victory was desperately needed to seal the last ticket for the playoffs. The first opportunity was considered extremely difficult, going on the road against Panionios. Regardless, it still had a chance of actually happening, as Maroussi fell only two points short of the victory. Already there Seibutis delivered a strong game, with 15 points, 3 rebounds and 2 assists. Anyway, he took over on the weekend against Makedonikos, with 20 points, 4 rebounds and 3 assists to secure the victory for his team and a post-season audition against the almighty Panathinaikos, who will participate in the Euroleague Final Four this weekend right in front of the watchful eyes of DraftExpress.

The very least you can say about Seibutis is that he has emerged as arguably the steadiest performer for Maroussi this season. He leads the team in total scoring (averaging 13.5 points) and you can always count on his effort and activity on the court while delivering good decision making. Hes constantly cutting and playing without the ball in the set offense, he doesnt hesitate to attack his opponents, he loves to run the floor in transition, and hes aggressive on defense, both in individual match-ups or team rotations. Despite that intensity, hes a guy that plays under control, takes good decisions and commits few mistakes. Indeed, his 1.3-turnover average is a very reasonable amount for a player who takes so actively part in his teams game.

So far, this isnt anything we didnt already know about Seibutis (lets recall, a former MVP in the U-21 World Championships a year and a half ago). Although there hasnt been any dramatic improvement in his game, the added consistency hes achieved with his three-point shot is very good news. Not that we ever doubted his ability to become a reliable perimeter shooter given his very nice mechanics and excellent accuracy from the mid-range area, but for a shooting guard like him, it was imperative to solidify an effective three-point shot to better contest elite defenses, and he seems to be on the right track. Seibutis credits a terrific 47.2% accuracy this season from behind the arc in the Greek League, not really very different from last season in Olympiacos, but displaying significantly more shot attempts (he went 5/8 from the arc this last week, for example). Still, its mostly spot-up jumpers, but you can feel the improved confidence in his stroke.

Most of his flaws NBA-wise are still there, though. Seibutis is not particularly gifted physically, with average size and a skinny body. However, hes visible stronger now, but still has a ways to go working on his frame. His athleticism is not on par with what you want for a NBA shooting guard. Among other things (some defensive limitations or poor ability to create his own shot), it limits his effectiveness in slashing situations, as hes not that explosive and doesnt enjoy the leaping ability to comfortably finish near the rim against opposition. Indeed, Seibutis often uses his drives as just part of his teams offensive flow, passing the ball after a couple of dribbles. He displays good criteria sharing the ball, but hes not an outstanding passer to create assists (averaging just 1.5).

Renaldas is already a nice player in Europe, and he will surely become a very good one, but the NBA looks a long shot right now, which obviously dont help his cause come draft night. Hes on loan in Maroussi, as his rights still belong to Olympiacos, where he might return next season, having the chance to play in the Euroleague again.

Omri Casspi is on fire lately, showing impressive accuracy since returning from the Hoop Summit, crediting 71.4% shooting from the field in the last four games, while averaging 18 points per game in the last three. Last week, Casspi had 17 points, 4 rebounds, 4 assists and 3 steals against Givat Shmuel, and 17 points and 6 rebounds against Ironi Ramat-Gan. The best part about it is that Galil Elyon has won all those last four games (with an incredible production in European basketball: 108.7 points per game!); actually, out of the last eight games they have only lost the one Casspi missed to play in the Hoop Summit.

Saúl Blanco continues with his excellent end of the season spurt. This time he particularly shined in the scoring department, netting 18 points with very nice percentages (7/9 FG, 3/4 3P), although his team Alta Gestión Fuenlabrada couldnt keep up with a much stronger DKV Joventut. If some NBA teams still havent done their homework on him, they better hurry up, because there are only two games until the end of the season for Blanco.

Ernests Kalve is having an off season due to injury troubles, as reports FIBA Europe. Apparently, the Latvian wing entered the season with a knee injury that hasnt allowed him to play much in Giessen, a German team where he was loaned to from Benetton Treviso, precisely searching for playing time. He has only managed to stay on the court for 64 minutes all season long, distributed in 10 games-- averaging 2.5 points.

DraftExpress recently learned about three European power forwards who submitted letters to declare for the NBA draft. Coincidentally, all three guys have several characteristics in common.

According to his agent Eric Fleisher, Nikita Shabalkin will be testing the waters after his excellent campaign with the Russian team Samara, particularly in the FIBA EuroCup Challenge, where he averaged 22.5 points and 7.3 rebounds. Standing around 6-8, while not displaying great athleticism, he doesnt look like the greatest NBA commodity. Still, he enjoys a nice wingspan, an excellent skill set (an intriguing low post game, solid stroke with nice range, handles to attack his opponents), hes fairly tough on the court and he shows a good basketball IQ, so its not completely out of the question that some team gambles on him in the second round.

The trio is completed with the Ivanov twins coming from Bulgaria, who are represented in the NBA by Andy Miller and Justin Zanik from ASM Sports/U1st Sports.

Although very similar players (what a surprise), Deyan Ivanov might look like the more talented one. Signed by the Spanish ACB team Caja San Fernando last summer, he played most of the season with Cajas second team in LEB-2 (third Spanish division), where he led his team in efficiency rating with averages of 13.7 points and 6.5 rebounds, and even made his debut in the ACB League with a 6-minute appearance back in December. He has been loaned a few weeks ago to Drac Inca in LEB (second division) in order to help them in the promotional playoffs. He has already played two games there, already averaging 12.5 points and 6.5 rebounds.

Deyan is a 6-9 1986-born power forward, rather mature for his age, who displays nice versatility in his game (he can effectively shoot the ball out to the three-point line, put the ball on the floor, deliver some moves in the low post or pass the ball with good criteria) while enjoying good intensity on court (hes quite tough given his youth).

His brother Kaloyan Ivanov is an extremely similar player, perhaps just a very slight degree below his brother in terms of passing game and skill refinement. Landing in a weaker Spanish team such as ViveMenorca, he has been able to spend the whole season playing the ACB League, averaging 4 points and 1.5 rebounds in less than 10 minutes per game. It doesnt look like great production, but its not easy to enjoy action in such a demanding league as the ACB.

Both Bulgarian twins share with Shabalkin their limited athleticism (NBA wise), and although they might be slightly taller, the Russian makes up for it with a better wingspan and skill repertoire. Shabalkin already attended the Reebok EuroCamp in Treviso last year, which could be a nice setting for the Ivanov duo to get exposure and compete against their peers (they are competitive guys who would likely fare pretty well there). However, if they dont manage to attract any teams attention, they will likely withdraw and wait until next year.
Read Next...