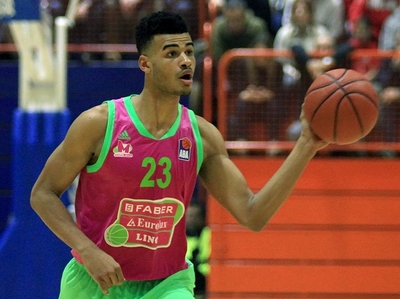 A player we've covered in significant detail earlier this season, Timothe Luwawu's season came to a slightly premature end as he suffered an ankle injury in late May that held him out of the Serbian League playoffs. One of the biggest riserx among international prospects this season, the talented Frenchman showed massive improvement from last season ending the year averaging 14.5 points, 4.6 rebounds, and 2.8 assists over 30.1 minutes per game. Possessing terrific size and athleticism for a wing to go along with an improving frame, Luawau's intrigue at the NBA level has always started with his physical tools, but his improved jump shot and play in a large role for prospect-rich Mega Leks are the reason he's regarded as highly as he is heading into the 2016 NBA Draft.

Connecting on 36% of his attempts from beyond the arc on 5.3 attempts per-game, up from 29% on just 2.2 last year when he played in the French Second division with Antibes, Luwawu appears to have become a significantly more viable threat from the perimeter. Despite his overall uptick in efficiency, the young Freshman still has a way to go as a perimeter threat as he struggled with bouts of inconsistency throughout the year, shooting just 17% from beyond the arc over five games in January, and 25% over five games in May. He was solid on catch and shoot situations on the year overall, but his effectiveness off the dribble slid a bit as the year wore on, which was only compounded by the sizable role he played offensively.

Even if Luwawu's skill set and decision-making didn't always line up with his role, there's little question that being thrust into a situation where he was asked to regularly create in the pick and roll and push the ball on the break was a plus for him. The freedom Mega Leks offers to young players is more or less unprecedented in the European game, and though Luwawu figures to play a dialed back role at the next level early on, he got plenty of on job training this season that could serve him well in the future. He wasn't overly efficient shooting on the break, got tunnel vision going to the rim, and made some questionable decisions as a passer throughout the year, but also had plenty of impressive moments, giving plenty of reason for optimism about his offensive skill set moving forward.

Scouts hold similar sentiments about Luwawu's defensive ability, as his tools and potential are obvious, but his effort level and consistency were not always ideal. Even with his shortcomings, Luwawu nonetheless played a major role in his team's success this season and boosted his standing in the eyes of scouts significantly from a year ago, and Mega Leks will have a chance to make history come draft day partly because of that.

Four separate drafts have included three players selected from the same international club: Montenegrin power Buducnost in 2003, ACB club Joventut in 2009 (though Christian Eyenga played mostly for CB Prat), Mega Leks in 2014, and Sevilla in 2015. Mega Leks seems like a mortal lock to add themselves to this list once again since Ivica Zubac, Rade Zagorac, and Luwawu all remained in the draft part the withdrawal deadline, but could also conceivably become the first international club to have three players selected in the first round. The increasingly successful Serbian club continues to churn out prospects emerging as perhaps the most unique situation for promising young players outside of the college game.
Read Next...