Top NBA Draft Prospects in the ACC Part One (#1-5) 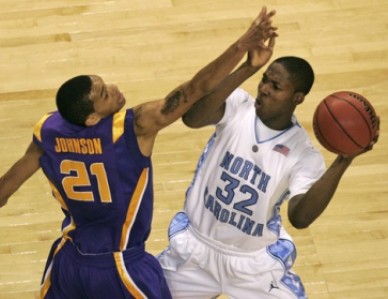 As a reminder, incoming freshmen have been excluded from this series.

A consensus top-10 recruit, Ed Davis had the attention of NBA decision-makers from the moment he suited up for the North Carolina Tar Heels last fall. Though he didnt display the most polished skill set, after playing a small role for the National Champions, Davis was a potential lottery pick last season based almost entirely on his upside. Wasting no time in voicing his decision to return to school, the freshman positioned himself as a top-10 prospect for the 2010 draft and a player to watch in the upcoming season.

It isnt hard to see what makes Davis such a highly regarded prospect despite his lack of experience. Standing roughly 610 and possessing an outstanding wingspan, Davis displays excellent mobility and coordination for a player still only scratching the surface of his remarkable promise. Passing the look-test with ease, the only aspect of Davis physical profile that can be considered problematic is his lack of ideal strength. Possessing a fairly narrow frame, it wont be easy for Davis to add weight, but hell have plenty of time to fill out as his game continues to emerge.

Though Davis averaged a respectable 6.7 points per-game last season, a number that will likely double this season with graduation of Tyler Hansbrough, Wayne Ellington, Danny Green, and Ty Lawson to the NBA. Playing a purely complementary role, Davis showed the flashes of brilliance that one would expect from a player with his tools. Creating opportunities for himself by working hard on the offensive glass and being the beneficiary of countless draw and kicks from his teammates, Davis displays absolutely tremendous touch around the basket something Roy Williams consistently took advantage of last season.

Though Davis will need to develop his lower body strength to establish position on the block at the next level, he saw almost 40% of his possessions in the post and shot 48.8% when operating with his back to the basket last season according to Synergy Sports Technology. Lacking a great deal of polish or much in the way of counter moves, Davis scores most of his points operating over his right shoulder, displaying good extension on his hook shot. Hell need to improve his comfortable level with his right hand to avoid becoming predictable, but has essentially no trouble shooting over his defender whenever he decides to elevate. For a freshman post player with a lot of room for improvement, Davis looks smooth and decisive, two things that bode well for his ability to diversify his post game in the future.

While Davis already shows a natural feel for getting his shot off in close, he doesnt display much in the way of a midrange game at this point. Able to face-up and put the ball on the floor for one or two straight-line dribbles, Davis can get to the rim off the bounce when the opportunities presents itself, but he didnt shoot many jump shots last season, and will need to develop better follow through on his jumper to open up opportunities to use his other tools on the next level. Though Davis shoots the ball with an especially high release point from in close, his midrange jump shot isnt nearly as refined, featuring a long and inconsistent release that hurts his efficiency from outside of 12-feet. His ability to become more than just a catch and finish option in his second season will be an important factor in how he is perceived by NBA-types next summer.

Defensively, Davis has already taken some notable steps. Ranking in the top-20 in our database in both rebounds per-40 minutes pace adjusted as well as blocks per-40 minutes pace adjusted, the activity level Davis displays when working without the ball on the offensive end carries over seamlessly to the defensive side of the ball. Not the most explosive defender laterally, Daviss length is a tremendous asset to him defensively. Staying low and moving his feet well when defending the ball and stepping out on the pick and roll, the young big man still has a lot to learn, as hes prone to over-committing to help his teammates, staring down the ball, and recovering a step slow to shooters out on the perimeter. Still able to bother some shooters with his length even when he doesnt close out in time, Davis will show some good things on the block as well, doing a nice job going straight up to use his wingspan, showing good quickness, and solid discipline. As Davis develops his defensive fundamentals and awareness, hell become a very solid defender at the NCAA level, but his ability to add weight will be a big factor in how easily he can make the transition to the NBA.

Ed Davis enters his sophomore year with a lot to prove. Though he shows some nice tools, his role last season was limited something that will change considerably this season. One of Roy Williams top returns, Davis will be looked to for production and clutch play. His ability to deliver on both fronts, coupled with his physical development and ability to diversify his offensive game, will be key to his maturation as a player and 2010 draft stock.

Having profiled Aminu this summer, well wait until the season kicks off to revisit his scouting report.