Word on the Street, April 27 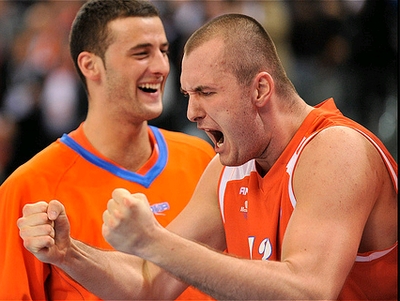 Donatas Motiejunas has decided not to enter his name in the 2009 NBA draft, according to his American agent, Herb Rudoy.

His plan for next season is to work on improving his game while he also concentrates on his physical development through a serious training program, Rudoy told us. His expectation is to enter his name in next year's draft.

In the meantime, Motiejunas has been invited to the Lithuanian National team training camp this summer, Rudoy added.

With Motiejunas removing his name from consideration, that makes no less than eight potential lottery picks that that decided to pass on entering the 2009 draft, which surely has to be some kind of record.
Amongst those eight, we counted the following:

Other notable underclassmen that probably would have been first round picks, yet decided to return: Jerome Jordan, Devin Ebanks, Solomon Alabi, Kyle Singler and International Jan Vesely.

Needless to say, teams should be looking to stock up on 2010 draft picks, since it appears to have all the early makings of an excellent group.

Those that will benefit the most from the huge quantity of players who decided not to enter are the underclassmen that are currently testing the watersNick Calathes, Gani Lawal, Patrick Patterson, Jeff Teague, Austin Daye and many others now have a chance to be taken much higher than first anticipated, since teams still need to select someone in the first round. Thats probably bad news for the schools and fan-bases hoping to see those players return.

Over the last few days, some NBA teams we spoke with slated to be drafting very high this upcoming June still held out hope that John Wall would change his mind and at least attempt to see if hes eligible for the 2009 draft. Alas, Wall appears very secure in his decision to attend college for at least one year, and we will never know how the NBA would have ruled if he had tried to challenge the status quo.

The NBA Draft was never a consideration his AAU coach Brian Clifton told us when we reached him this afternoon. When asked if he had any idea where Wall may have been drafted if he were deemed eligible, Clifton said he had no idea: we didnt pursue that, Clifton said.

Wall currently is projected as the #1 overall pick in our 2010 mock draft.

 Milan Macvan In the Draft

One player that did decide to enter his name in the draft late is Serbian power forward Milan Macvan, according to his agent David Bauman of DB Hoops. Despite telling us that he needs one more year of European experience before declaring for the draft, Macvan decided to strike while the iron was hot after a phenomenal showing in the Nike Hoop Summit.

His agent explains his decision: Milan thinks he needs one more year in Europe to keep developing, but given the economic issues in the NBA, you never know, a team might draft him in first round specifically to keep him in Europe and have no salary issue. Then he could stay in Europe for one more year and still be protected in the event of a possible lockout.

We will see how it goes.

Another European prospect that could benefit from what Bauman spoke about is Victor Claver, who also announced he's entering this year's draft.

Bauman also thinks that his client Aboubakar Zaki, who will also be on the early-entry list, will have a coming out party in Treviso and in NBA workouts.

Lost in a crowded day of early-entry declarations (Stephen Curry, Ty Lawson, Wayne Ellington) last week was a curious statement from UConn freshman Ater Majok, announcing his intentions to enter his name in the 2009 NBA draft.

A very highly touted high school recruit (#13 Rivals, #28 Scout), Majok didnt play a single game for UConn this past season, as question marks about his transcript did not allow him to even practice until the end of the first semester. His transcript is obviously a bit more complicated than most, as he hails from the Sudan, spent time in an Egyptian refugee camp, and also lived in Australia. He wont be eligible to actually play until the second semester of this upcoming season.

With that in mind, Majok decided to enter his name in the draft regardless, reportedly under pressure from his family, who were disappointed in how little exposure he received this past season. He will conduct private workouts with NBA and likely elects to return to Connecticut when its all said and done, but he no longer will have the option of testing the waters next year or later, since he already decided to burn his lone draft card.

We had a chance to watch Majok work out at the Adidas Nations camp, and also were able to speak to others who have evaluated him closely and more recently, specifically an NBA scout that spent time recently watching UConn practice.

From what weve seen and can gather, Majok will always be considered an interesting prospect thanks to his excellent combination of size (6-10), terrific length, and the competitiveness he brings to the floor. While he fancies himself somewhat of a small forward prospect, his skill-level is extremely limited at the moment by how raw of a player he is. He lacks a great deal of strength, balance and coordination, and possesses very little in the ways of experience or feel for the game. His perimeter jumper is incredibly streaky and he struggles to finish around the basket in traffic. Defensively, he appears to be a long ways away from contributing, beyond his ability to hit the glass, as he just doesnt have a great understanding of how to operate on this end of the floor. Since he only began practicing with UConn in January, hes obviously still very much beyond the curve. Athletically, he is solid, but not out of this world, looking somewhat stiff in his movements at times.

Majok is the type of player who could very well develop into an interesting prospect in the next few years, but hes way too far off from contributing to even be thinking about the NBA at this point, as weak as this draft may seem. Any team that even considers drafting him would only want to do so with the intent of stashing him overseas for the next few years.


 Corrections: Matt Bouldin and Giorgi Shermadini have elected not to enter their names in the 2009 draft.

All our 2009 NBA Draft Prospect Agent Listings can now be found in sortable format via the Player Agents Listings tab on the features pull-down menu.
Read Next...