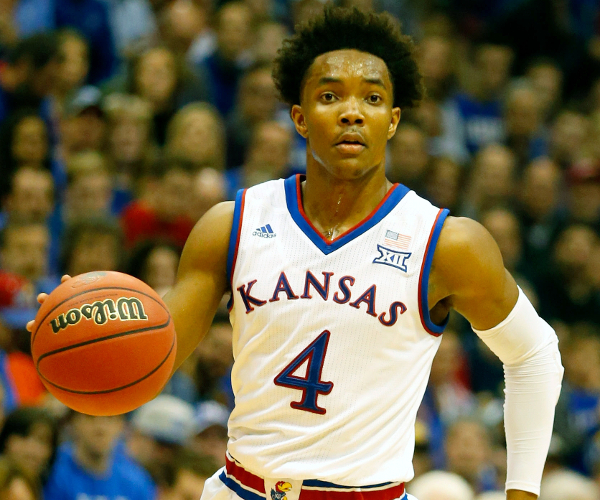 Devonte Graham was a key member of a Kansas team that fell short of its Final Four aspirations last season. He'll return this season for his Junior year, with two years of valuable experience under his belt. He finished on a strong note last season earning Big 12 Tournament MVP to go along with Big 12 First Team All-Defense, and he carried that strong play over into the Adidas Nations where he put together a very well rounded performance, impacting the game on both ends of the floor.

Playing alongside backcourt mate Frank Mason last season, Graham spent time both on and off the ball, but projects more as a point guard at the next level given his size. With that said, his size and shooting ability gives him the ability to play off the ball as well, especially considered how tenaciously he defends.

Graham has a smooth catch and shoot stroke, and shot it an impressive clip last season, hitting 43.6% on 4.5 attempts per game. While he has shown consistency in catch and shoot situations, he also has proven to be an effective playmaker with the ball in his hands. He's a willing passer who shows some good pace playing out of the pick and roll or spreading it out in transition. He has an extra gear he can get to which many collegiate guards simply don't possess, which he uses to take guys off the dribble and get into the lane, or create space for mid-range jumpers which he is more than capable of knocking down.

A very strong athlete, Graham is quick and fluid and can finish creatively around the rim with floaters and other touch shots on the go. Defensively he really flies around and competes, getting his hands on loose balls and getting into passing lanes. He is not afraid to get into ball handlers, and even blocked some shots in LA. Graham has the chance to be a real influence on that end of the floor with his pesky play.

Graham already is 21 years old, but given his age and experience he'll be one of the more impactful players on Kansas' roster next season. He has quite a bit of professional upside given his ability to influence the game in various ways, as a defender, as a shooter, and as a creator. It wouldn't be surprising for if Graham is able to take the next step as a prospect this season at Kansas, as many teams are looking for athletic guards in his mold who can hold their own on both ends of the floor.Interview from Adidas Nations