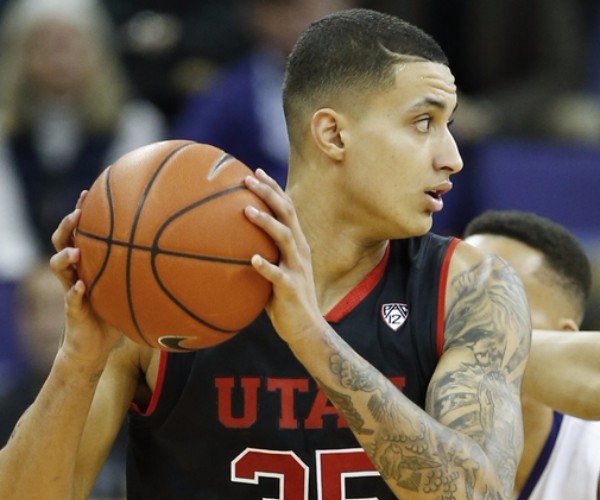 Julian Applebome
@jlapplebome
University of Utah Power Forward Kyle Kuzma had the best season of his college career during his fourth year under Head Coach Larry Krystkowiak.  As a team Utah fell off from last season with the departure of Jakob Poeltl, but Kuzma made strides individually, showcasing his versatility offensively. The Flint, Michigan native followed up his impressive redshirt Junior season with a strong showing at the NBA Combine, potentially working his way into the first round of the NBA Draft.

Standing 6'9.5 with a wingspan just over 7', Kuzma has the physical tools, fluidity, and budding skill set to fit the role of a modern-day NBA power forward.  He is light on his feet, shows excellent speed in transition, and has the athleticism to finish above the rim in space.  He is not the most explosive finisher in a crowd and lacks a degree of physicality around the basket, issues which will be tested on both ends of the floor at the NBA level versus elite athletes and size.  His biggest assets from a physical perspective are his agility, quickness, and footwork, which he shows sprinting the floor, diving to the rim off the ball or out of pick and roll, and in small spurts on defense.

Kuzma is a unique player in the fact that he can both handle and pass the ball well from the power forward position.  He has not quite developed into the role of a playmaking PF, but he is comfortable handling the ball on the perimeter or in transition.  He is capable of changing speeds and directions and uses his versatility to score and facilitate both in transition and in the half court.  He is not yet advanced in terms of creating his own shot, but he has a fairly quick first step, which he uses to get to the rim out of face up situations, or versus slower big men on the perimeter.  He is more of a smooth than explosive athlete and struggles to finish consistently vs length at the rim, but shows nice touch and range on floaters, which he uses to finish from in-between areas.

Kuzma averaged 3.1 assists per 40 minutes and his willingness and ability to facilitate from the power forward spot are part of what make him an intriguing prospect.  He shows vision in the open floor and does a nice job creating offense by pushing the tempo off defensive rebounds.  He uses his size effectively in the half court, passing over the top of the defense, and facilitating from the high post.  His overall decision making can still be shaky at times as he has the tendency to get sped up versus ball pressure, but he shows unselfishness as a passer and should benefit from playing with NBA spacing and not being the focal point of the offense.

The biggest key to unlocking Kuzma's potential at the NBA level will be continuing to improve on his perimeter shooting and turning himself into a consistent stretch-four threat.  As a junior, he shot 32.1% from deep on 3.7 attempts per game overall, but found more consistency as the year went on, converting on 40.7% of his 3 point attempts over the last ten games of the season.  He shoots an easy ball with nice rotation, and has the size to get his shot off in contested situations, as he demonstrated at the NBA Combine in front of hundreds of decision makers, going 4-5 for 3 in just 23 minutes of action.

While his form is clean and he has shown potential from NBA range, he still just a career 30% shooter from deep and his inconsistency shows at times, with some very erratic misses. He's also just a 63% career free throw shooter, which is also a bit of a red flag. The fact that he has touch and a clean looking release make it realistic that with more repetition he should be able to stretch his shot to NBA range, but that hasn't happened quite yet.  Consistency from the perimeter will be the key to Kuzma's development on the offensive end, because he has the ball-handling and passing ability to play out of closeouts or pick and pop situations.  While Kuzma has shown improvement in catch and shoot situations, he struggles shooting off the dribble, where he was just 3-22 on dribble jumpers per Synergy Sports.

On the defensive end, Kuzma shows flashes of versatility, but his effort level is inconsistent and his awareness can be poor.  He has shown the potential to switch ball screens using his agility and quickness to contain on the perimeter, but his one on one and team defense remain a work in progress.  He lacks the physicality to handle bigs down low, and doesn't provide much rim protection as a help side defender.  He averaged just .8 blocks and .6 steals per 40 minutes, both of which are extremely low numbers for someone with the above average length and athletic ability that he possessesa clear cut red flag.  His physical tools give him potential on the defensive end so long as he can buy into competing and playing his role in a team oriented defensive unit, but NBA teams will ask why that didn't happen at Utah and how much things will change as a 22-year old rookie.

As a junior, Kuzma averaged 11.6 rebounds per 40 minutes, and he exceled particularly on the offensive glass, where he showed good instincts and nice quickness attacking the ball off the rim. He is not a physical rebounder, but he gets off the floor quickly and uses his 8'11.5 standing reach to effectively pursue loose balls against bigger players.  Similar to the inconsistency he showed on defense, his effort on the glass wavered as well.  He had five games this season where he had four rebounds or less, and while at times he could get away with average effort in college, he does not have the elite physical tools to coast in the rebounding department versus NBA athletes.

Kyle Kuzma showed enough flashes of stretch-four potential that it would not be surprising to see him work his way into the first round of the NBA draft.  While his effort level on defense wavered at times, there are not too many players with the mobility and offensive versatility he demonstrates.  If he can continue to improve on his jump shot, and show consistency on the defensive end, then he has the potential to turn into an effective stretch four at the NBA level.
Read full article

The 6' 9.5 Kuzma proved to be one of the most offensively talented prospects to play 5-on-5, as he showed how projectable his game is when he's knocking down shots with consistency (something he struggled with at times at Utah). Sporting a quick release with sound mechanics, Kuzma made four spot threes, knocked down a one-dribble pull up and looked really comfortable attacking off the bounce and finding teammates on the move. The Flint, Michigan native, who already decided to forego his senior season and sign with an agent, still needs to get make strides defensively, but he certainly helped his stock with his game-one performance and, if he can shoot it well enough in workouts, could hear his name called in the first half of the second round (or even potentially late first) pending his remaining workouts and interviews.
Read full article