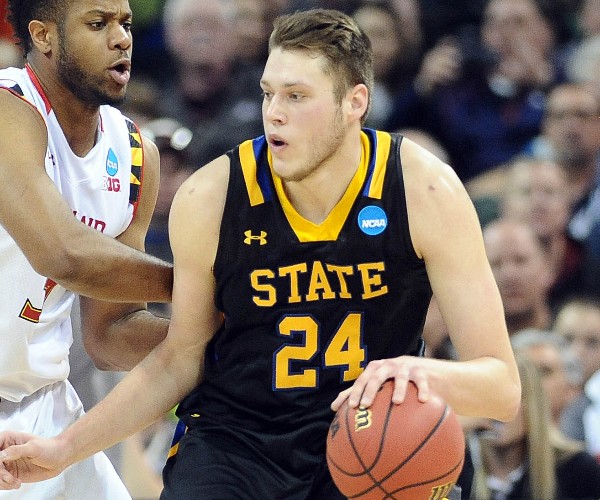 Jonathan Givony
@DraftExpress
A far more interesting matchup than your typical #1/#16 tilt, it is South Dakota State that has the best scorer in this game in big man Mike Daum. Averaging 25.7 points per game, shooting 42% for 3, while getting to the free throw at a prolific rate, Daum is a unique mismatch threat at 6'9. NBA scouts will want to see how he fares against the likes of Johnathan Williams, Przemek Karnowski and Zach Collins, as they havent had a chance to watch him play much against NBA caliber big men. Daum is highly skilled, but not particularly athletic, and there are serious concerns about how his production will translate against better competition due to his below the rim style. Scouts will be evaluating him especially closely on the defensive end, where he really struggles even against low-level big men, as he doesnt possess much quickness, explosiveness, or ability to cover ground.
Read full article

Jonathan Givony
@DraftExpress
Redshirt freshman Mike Daum puts up outrageous per-40 numbers off the bench for South Dakota State, at 29 points and 11.7 rebounds, while shooting a terrific 58% from 2-point range and 45% for 3. He has a chance to show that his numbers are not just the product of playing in the Summit League, where his lack of athleticism isn't as much of an issue at the center position as it might be against better competition.

Daum is a below the rim player with long arms and a strong frame, who gets by on his terrific timing and basketball instincts. He shoots a very funky looking 3-point shot from above his head with a slow release that he's able to throw in the basket with great touch, even without bending his knees. He can use his size and high release point to get his shot off against most big men, even in the mid-range area, which is a nice advantage and something South Dakota State might have to utilize in a game where they are severely overmatched talent-wise.

Daum loves to operate from the short corner, where he can drive in both directions using a deceptively strong first step and finish off the glass using soft touch and crafty counter-moves with either hand. He can also post up a bit, showing strong footwork, body control and the length to use different angles, which will he'll need to use to the fullest to score over the top of the long wingspans of Diamond Stone and Robert Carter. He gets to the line a ridiculous 10 times-per-40 minutes, and converts a terrific 81% of his free throw attempts once there.

Daum's biggest challenge in this game will be his porous defense, which may be compounded by the fact that he needs to guard two of the most skilled big men in the country in Stone and Carter. In the Summit League he often appears simply too slow to guard power forwards and too below the rim to offer any real rim protection, struggling to cover ground or get over the top of screens. This is likely one of the biggest reasons he only plays 20 minutes per game despite being, on paper, one of the most prolific and efficient scorers in college basketball, and will be a huge hindrance to his professional aspirations if he isn't able to address it.
Read full article