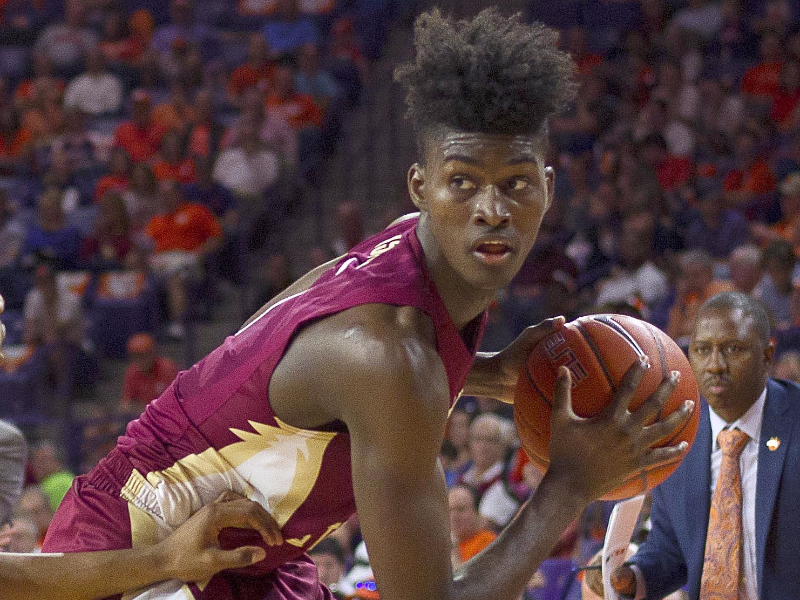 Jonathan Givony
@DraftExpress
When do the top college prospects for the 2017 NBA Draft take the floor on Thursday for the Round of 64 at the NCAA Tournament? And what will NBA scouts be looking for?

12:15 PM - CBS - Buffalo, New York#5 Notre Dame #78 V.J. Beachem, Steve Vasturia, Bonzie Colson, Matt Ryan
vs.#12 Princeton
After a promising junior year, shooting 44% for 3, many scouts hoped V.J. Beachem would take the next step in his development and emerge as somewhat of a go-to guy for Notre Dame. That has yet to happen, as Beachem has often looked content fading in and out of games, operating strictly as a spot up shooter, but unfortunately only making 38% of his attempts this season. Scouts want to see a little more fire out of Beachem on both ends of the floor, and here in the NCAA Tournament would be a good place to start, in a game where he'll have a significant talent advantage against Princeton.

UNC-Wilmington is a very trendy upset pick in this 12-5 contest, but this is far from a great matchup for this face-paced, undersized team who will be forced to grind it out against Virginia's outstanding defense. The Cavaliers don't have much in the way of NBA prospects, but are extremely well coached and wont be phased by Wilmington's press. London Perrantes, their best player and a likely high-level overseas pro, will be tasked with handling their ball-pressure. This is a great opportunity for Wilmingtons First-Team All-Conference sophomore, C.J. Bryce, to show he can hold his own against top-level competition.

2:00 PM - TBS - Salt Lake City, Utah #1 Gonzaga #25 Zach Collins, #50 Nigel Williams-Goss, Johnathan Williams, Killian Tillie, Jordan Mathews, Josh Perkins, Przemek Karnowski
vs.#16 South Dakota State Mike Daum
A far more interesting matchup than your typical #1/#16 tilt, it is South Dakota State that has the best scorer in this game in big man Mike Daum. Averaging 25.7 points per game, shooting 42% for 3, while getting to the free throw at a prolific rate, Daum is a unique mismatch threat at 6'9. NBA scouts will want to see how he fares against the likes of Johnathan Williams, Przemek Karnowski and Zach Collins, as they havent had a chance to watch him play much against NBA caliber big men. Daum is highly skilled, but not particularly athletic, and there are serious concerns about how his production will translate against better competition due to his below the rim style. Scouts will be evaluating him especially closely on the defensive end, where he really struggles even against low-level big men, as he doesnt possess much quickness, explosiveness, or ability to cover ground.

Yet another trendy upset pick, this could very well turn out to be one of the most entertaining games of the first round. East Tennessee has impressive depth, shot-making ability and a highly skilled and prolific senior lead guard in T.J. Cromer (first team All-Conference) they can go to for late-clock scoring. His matchup with Florida sophomore Kevaughn Allen will be decisive, as both guards can get extremely hot from the perimeter, love to push the ball in the open court, and demonstrate questionable decision making at times.

Cromer has a great opportunity to show NBA scouts he can handle an elite defense and still translate his gaudy scoring production.

Florida's best NBA prospect is the enigmatic Devin Robinson, who has been highly inconsistent on both ends of the floor in his three years in college so far. Having turned 22 already, Robinson might feel some urgency to give his stock a boost in this NCAA Tournament before likely declaring for the draft this spring.

4:30 PM - TBS - Salt Lake City, Utah#8 Northwestern Vic Law, Bryant McIntosh
vs.#9 Vanderbilt #81 Luke Kornet, Matthew Fisher-Davis
After a somewhat slow start to the season, partially due to injury, Luke Kornet came on very strong for Vanderbilt in SEC play, winning First-Team All-Conference honors as well as a spot on the All-Defensive team. Kornet has yet to develop into the sweet-shooting, efficient, 7'1 big man NBA scouts hoped to see him blossom into, with his 3P% continuing to hover around 32% after peaking at 41% as a sophomore. Still, his size, solid feel for the game, theoretical floor-spacing potential and decent instincts defensively (despite his extreme lack of quickness) give hope he can turn into the type of stretch-5 many NBA teams covet.

Against a Northwestern team that isn't especially big, tough, athletic or imposing inside, Kornet should have somewhat of an advantage.

Many analysts feel Maryland was overseeded and this game against Xavier is somewhat of a toss-up. Xavier would surely be favored had their starting point guard, Edmond Sumner, not gone down with a torn ACL at the end of January.
The matchup scouts will be keying in on is at the power forward spot, between Canadian freshman Justin Jackson, and Xavier junior Trevon Bluiett. Jackson has the length and versatility to play anywhere from 3-5, and the fact that he was able to make an impressive 43% of his 3-pointers really helped spread the floor for point guard Melo Trimble. While Jackson appears to be a legitimate NBA prospect (likely more for 2018 or beyond), he has been in a serious slump as of late, which likely played a major role in Maryland limping to the finish line in Big Ten play.

NBA scouts have a number questions they'll ask in the lead-up to the 2017 Draft regarding how well the production of Villanova's All-American senior Josh Hart will translate to the pro setting, including his ability to move from the small forward/power forward position to the wing, his unconventional jump-shooting mechanics, and his good, but not great athleticism. Few of them will be answered in this opening round game against a severely overmatched 16th seeded opponent, though, which will likely cause them to focus their attention elsewhere.

This will be a very interesting matchup between two slow-paced teams that move the ball effectively and play inside and out. Purdue's strength is in the post, with 7-footer Isaac Haas and ultra productive 6'9 center Caleb Swanigan. It will be fascinating to see how Vermont decides to match up with those two, how many minutes Matt Painter plays the tandem together, and whether the Boilermakers season-long hot shooting can continue as inevitable double-teams get thrown their way inside the post.

Florida State freshman Jonathan Isaac will draw plenty of NBA scouts to watch him, even after a somewhat underwhelming two game showing at the ACC Tournament in Brooklyn this past weekend. Isaac brings great versatility to the table as a 611 combo forward who can handle the ball, make 3-pointers and defend all over the floor, but scouts will want to see what type of urgency he demonstrates in potentially the last games of his college career, as he's looked very passive at times this season. Hell likely see quite a few possessions matched up with Atlantic Sun Defensive Player of the year Demetris Morant, which will be a good test for him.

Florida Gulf Coast junior and First-Team All-Conference member Brandon Goodwin gets a chance to show that his outstanding production this season can translate to higher levels of competition in his return to hometown Orlando.

An extremely undersized Virginia Tech team will have their hands full with Wisconsin's outstanding frontcourt made up of pro prospects Nigel Hayes, Ethan Happ and Vitto Brown. Zach LeDay is tough, efficient and highly productive, but at 6'7, he'll need a super-human performance to combat the size, length and skill of Wisconsin's big men.

Arizona went small for long stretches in the Pac-12 Tournament Championship game against Oregon, starting sparsely used 6'9 Keanu Pinder at center. It will be interesting to see if they decide to do the same against North Dakota, who are similarly undersized. Lauri Markkanen has been ice cold as of late, making just 29% of his 3-pointers over the last ten games. They'll need him to revert back to form to have any chance of advancing past the likes of Florida State or Gonzaga.

This might end up being one of the most entertaining games of the first round, as two red-hot teams collide. Scouts will be watching the matchup inside between Deonte Burton and Cameron Oliver, two skilled and versatile big men with very different styles of play. Oliver has an NBA body and prototypical power forward skill-set, but is extremely inconsistent with his effort and approach. Burton has the height of a wing, but is strong enough to bang inside with any college big man. Both power forwards are talented, but have been extremely inconsistent from game to game and even possession to possession.
Read Next...