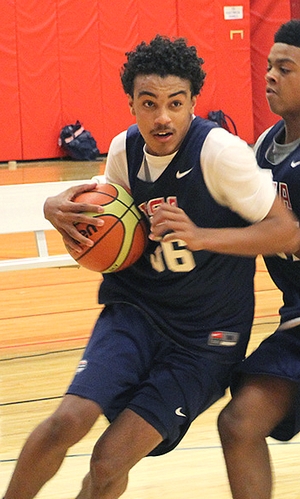 Strengths
-Has grown an inch and a half, both in terms of height and shoes, since last being measured in June. Also added five pounds.
-Looks to have improved athletically somewhat. Showed a quicker first step and added aggressiveness attacking opponents off the dribble in the half-court
-Pass-first point guard who is extremely unselfish
-Shows an advanced understanding of how to play pick and roll for a player his age (15)
-Savvy about drawing fouls
-Competitive on defense. Always hustling. Good instincts in passing lanes
-Scraps for rebounds impressively (11.1 per-40 at U16 FIBA Americas)
-Shows soft touch on his floater, and nice footwork stepping into his jumper
-Second youngest player in attendance

Weaknesses
-Jump-shot is a major work in progress. Release is not particularly smooth or fluid. Tends to fling the ball at the basket
-Still has work to do on his ability to score inside the arc efficiently.
-Not a prolific scorer in general at this stage

Outlook Tyus' brother showed a great deal of improvement since the first time we evaluated him this past June, both physically and skill-wise. He's a legitimate prospect in his own right, and was one of the better point guards in the camp from the younger group of players.
Read full article

Mike Schmitz
@Mike_Schmitz
Tyus Jones' little brother Tre Jones (NR by all services currently) isn't anywhere near as heralded as his older sibling at the same stage, but he did enough over the course of the week in running the team steadily and unselfishly to earn the trust of the USA Basketball coaching staff.

Undersized for a point guard at just 5-11 ½ without shoes, with a 6-2 ½ wingspan and a 166 pound frame, Jones is not blessed with great physical attributes, but has good quickness nevertheless. He's an aggressive player who excels in transition and loves to attack the basket, either to finish with a floater using either hand, or find the open man. His outside shot is a work in progress, but he showed some signs of being able to make pull-up jumpers, even if his range doesn't quite extend yet to the 3-point line consistently. Defensively, his average tools hamper him from making a consistent impact, but he competes and is very intelligent, which is more than enough against players this age. Even though he was not the most naturally talented guard at this camp, he shows most of the attributes USA Basketball looks for in a point guard at this level, particularly his strong intangibles and a willingness to play a role, which ended up earning him the nod.
Read full article