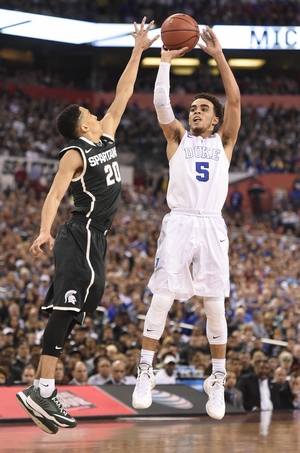 Tyus Jones, the second year pro and 24th overall pick out of Duke in 2015, put together an impressive performance in Vegas, earning him MVP honors. Jones took the keys to the Timberwolves offense when Kris Dunn went down with a concussion after two games, and led the team to the finals where they lost in overtime to the Chicago Bulls. Jones led the Las Vegas Summer League in assists at 6.8 per game, and finished third in points at 20.4 per game.

Jones has just average physical tools for a point guard, but he has elite ball handling and decision making skills. He looks very comfortable and patient playing out of ball screens, and keeps defenses off balance with hesitation and crossover dribbles, as well as his ability to knock down the pocket jumper. Jones has shown that he can get into the paint and make plays, but struggles finishing against length and often resorts to floaters and runners. He has some catch and shoot ability, having shot 37% on 106 attempts with Idaho and Minnesota last year. Jones hit some big shots in Las Vegas, and showed he could lead a team, but it will be interesting to see where he can find minutes next season behind Ricky Rubio, Zach Lavine, and Kris Dunn.
Read full article

DraftExpress
@DraftExpress
-Tyus Jones: The skilled point guard measured 6'0.25 without shoes to go along with a 6'5 wingspan and a 184.6 pound frame. Measured at 6'0.75 with shoes last year by USA Basketball, it is safe to say Jones has grown a bit since that time, but he was also 191 pounds with a 6'5.25 wingspan at that point. While every little bit in terms of size helps for a player like Jones, his weight loss is also interesting. Interestingly, Jones compares favorably to both Mike Conley and Chris Paul when they were coming out of Ohio State and Wake Forest respectively. Conley measured 5'11.75 without shoes with a 6'5.75 wingspan and a 175-pound frame while Paul was 5'11.75 with a 6'4.25 wingspan and a 178-pound frame. Though Jones doesn't have elite quickness like those two players, from a sheer size standpoint, he fits in with some of the league's top floor generals.
Read full article 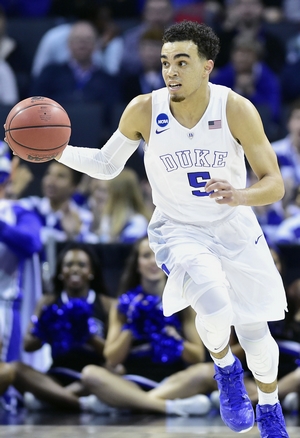 On the other hand, his physical profile is clearly that of a backup point guard, not a starter, which may make it difficult for a team to pick him in the lottery. Can he develop into a good enough shooter/scorer to overcome his struggles finishing inside the paint? Will he become a better defender in time? NBA teams will try and learn more about him during the pre-draft process against the likes of Jerian Grant, Cameron Payne and Delon Wright to get a better feel for how to rank them.
Read full article

DraftExpress
@DraftExpress
Tyus Jones only grew a quarter of an inch in the span of a year according to our measurements, but added 16 pounds to his frame, which he likely needed to do. His wingspan is now listed at a respectable 6-5 ¼, which helps compensate somewhat for the fact that he's only 6-1.
Read full article 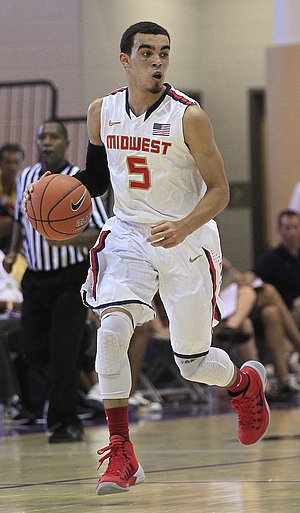 Strengths:
-Extremely creative and fundamentally sound point guard
-Can both score and distribute extremely well
-Possesses a superb first step.
-Can operate at different speeds
-Has very good court vision. Is a willing passer who reads the defense, anticipates well and can move the ball around with pinpoint accuracy
-Gets to the basket at will at the high school level. Draws a ton of fouls. Lives at the free throw line
-Does a good job of getting teammates involved. Makes crisp passes
-Improved 3-point shooter. Made 41% of his 3-point attempts in 23 Nike EYBL games this spring
-Can make shots with feet set or off the dribble
-Converted 87% of his free throw attempts
-Good anticipation skills in passing lanes
-Business-like approach. Carries himself impressively for his age

Weaknesses
-Does not possess great physical tools in terms of size, frame or length
-May struggle to draw fouls and finish as effectively around the basket against taller, longer, stronger competition at next level
-Average defender. Conserves energy. Gambles. Does not put great effort in, usually by design due to the considerable offensive load he's expected to shoulder. Question marks persist about how he will fare guarding more physically gifted point guards

Outlook: Mature and intelligent point guard who can carry a team with his scoring ability as well as make others better. Has great potential on the pick and roll. Used to be a relatively poor shooter, but seems to have improved that part of his game. Average height and narrow frame are the biggest concerns revolving around just how high his ceiling is long-term.
Read full article

DraftExpress
@DraftExpress
Tyus Jones out of Apple Valley High School in Minnesota talks about what he wants to accomplish at the Elite 24, the difficulty in making a college decision, and his goals for college when it comes to improving his game. From the 2013 Under Armour Elite 24.