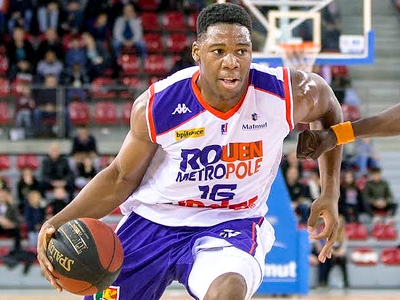 Among the more intriguing international early entrants for the 2016 NBA Draft, Guerschon Yabusele was one of the only players under the age of 21 to see significant action in the French first division (Pro A) this season. Averaging 11.5 points and 6.8 rebounds per game for often outmanned Rouen, who were relegated to the second division after finishing just 6-28, the powerfully built forward became one of just three draft-eligible domestic players this decade to end the year averaging over 10 points and 5 rebounds per game, joining Ludovic Vaty and Mouhammadou Jaiteh.

Born in Dreux, a town of 30,000 an hour west of Paris, Yabusele spent the early part of his career with Roanne, playing exclusively in the Junior League (Espoirs). The thick power forward also played a minor role at a number of international events in his late teens, for example Team Africa at the 2013 adidas Nations, as well as France's U18 and U20 National Teams.

A bit of a late bloomer, Yabusele made his Pro A debut in 2013, but didn't see significant action at the senior level until Roanne was relegated to Pro B during the 2014-2015 season. Averaging 8.5 points and 4.3 rebounds per game as a regular starter, Yabusele began to show some promising signs, albeit against less than stellar competition.

His jump into the collective conscious of NBA decision makers came at the 2015 EuroCamp, where, in front of representatives of every NBA team, including over a dozen General Managers, the then 19-year-old big man scored 20 points per game posting a PER of 48 for France's U20 National Team in three preparation games, thoroughly dominating offensively. Averaging a less impressive 9.2 points and 6.6 rebounds per game at the actual U20 European Championship, Yabusele had nonetheless planted himself firmly on the radar of NBA scouts entering this season, as he made the jump back to Pro A, signing with Rouen (not to be confused with Roanne).


Measured on the NBA workout circuit in recent weeks at 6'8 in shoes with a near-7'2 wingspan and tipping the scales around 270 pounds, it isn't difficult to see what makes him an interesting prospect on first glance. Yabusele has a massive frame that appears to be able to gain and lose weight quickly, and though he is slightly undersized for a power forward, he compensates with his wingspan and nice explosiveness. What makes Yabusele unique, aside from his physical tools, is that he appears very comfortable playing facing the basket offensively and possesses terrific scoring instincts.

Playing a massive role for Rouen, especially down the stretch when he played all 40 minutes on a number of occasions, and enjoyed a huge amount of freedom, the talented big man did around a third of his scoring from the perimeter on spot up or pick and pop opportunities according to Synergy Sports Technology. Contributing in a variety of ways in the paint cutting off the ball, running the floor, crashing the boards, and even creating a bit for himself in the post, Yabusele wasn't overwhelmingly productive in any one area, but did a bit of everything offensively.

Perhaps the most intriguing element of the French forward's game is his jump shot. A reliable shooter with his feet set all the way to the 3-point line, Yabusele shoots a bit of a set shot getting very little elevation, but has a fluid release. He attempted just 1.8 3-pointers per game this season, but made 43% of his attempts and 43% of long twos. Understanding his limitations and shooting very few pull up jumpers, Yabusele seems to have some potential as a legitimate floor spacer, though it will be interesting to see how his shot (and two-handed above the head release point) translates to the NBA 3-point line.

Around the basket, Yabusele is a good, but not great finisher. Shooting 57% around the rim in the half court, the 1995-born forward tries to tear the rim down with dunks when he can elevate in space, and carves out good position bullying opposing players with his frame, but isn't particularly quick off his feet and forces some shots driving to the basket from the mid-post around defenders. Flashing solid footwork, Yabusele tosses in the occasional half hook spinning off of defenders, but has room to improve his left hand and shot selection inside.

Finishing in the top-20 in Pro A in offensive rebounds per 40 minutes pace adjusted, and setting some solid screens to free up teammates, Yabusele does some of the little things as well, but isn't overly physical despite his strength. He has a lot of room to grow as a playmaker, but also flashes solid vision at times. A fairly skilled offensive player with terrific hands who can even put the ball on the floor a bit, Yabusele has some interesting tools to work with offensively.


The challenge for the bruising big man moving forward will be on the defensive end, where Yabusele struggled mightily this season. Rouen was the worst defensive team in Pro A by a comfortable margin, so expectations were fairly low, but Yabusele did little to help matters, frequently seeming to be going through the motions. Lacking great lateral quickness on the perimeter and providing little rim protection, Yabusele's length and strength help him in the post at times when he's competing, but he has a number of significant questions to answer on this end. At this stage, the jury is out on what Yabusele could be capable of in a more demanding environment with a bigger focus on defensive coaching and conditioning. To his credit, he looked far more engaged and showed better feet in other settings than he did at almost any point this season.

Making huge strides over the last two seasons, Guerschon Yabusele is a strong draft and stash candidate who could find his way into the late first or early second round depending on his willingness to stay in Europe for another year (or two). His defensive ability is a huge question mark, but if he can make significant strides on that end, particularly as a rim protector, he could even feasibly have some potential as a small-ball center. He is a little green at this point, but there's plenty to like about his game moving forward.

Yabusele's contract situation is interesting. Rouen bought his rights from Roanne last summer. He has a NBA out clause for this summer, and his team was relegated to Pro B, meaning a change of scenery is obviously coming. If the team drafting Yabusele wants him in the NBA immediately then there is nothing to be seen here, but if a team wants to stash him in Europe this coming season, he'll need to find a way out of his current contract if he wants to move to a more favorable development situation, which may require some creativity.
Read Next...