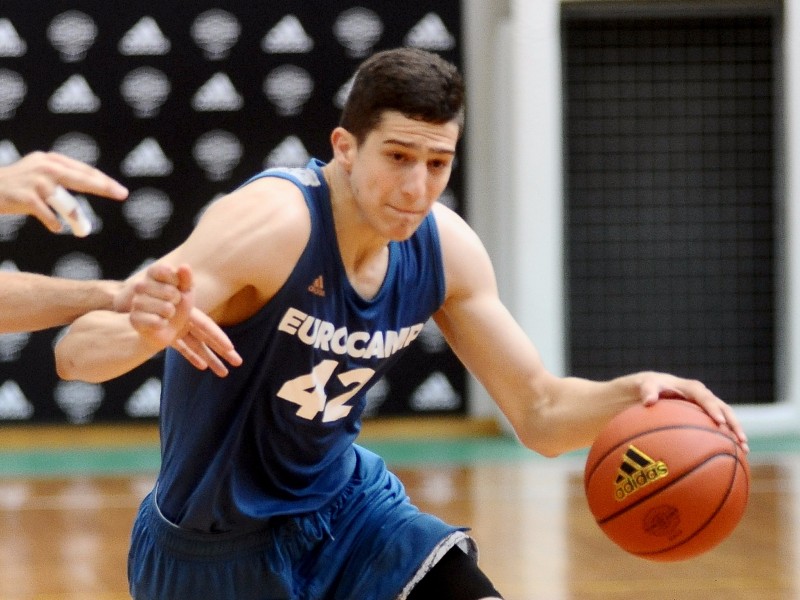 Another young player who stood out this week was Amar Gegic. The Bosnian guard who measured 6'7 in shoes with a 6'7.5 wingspan and a 203-pound frame showed nice passing instincts finding teammates out of the pick and roll. Playing quite a bit of point guard here and during the season with Bayern Munich's 2nd team in the German 3rd Division, Gegic is a solid athlete who can be a bit wild at times, but has some upside as a facilitator long-term, especially if he can improve on his erratic perimeter shooting. Among the more versatile young guards in Europe, Gegic's ability to keep the defense honest from the perimeter will go a long way towards opening up the rest of his game moving forward.
Read full article

Matt Williams
@DraftExpress
-Bosnian combo guard Amar Gegic has been considered a highly regarded prospect for quite some time, as he has good size, length, athleticism and versatility for a player his age. He's struggled to put it all together as a shooter, decision maker or overall scorer, but is someone NBA teams will want to monitor due to his intriguing upside.
Read full article

Strengths:
-Good physical profile. Nice frame. Long arms
-Fluid athlete. Moves extremely well. Quick first step
-Talented ball-handler. Often tasked with bringing ball up the court for Bosnia and playing point guard
-Handles ball on pick and roll consistently.
-Has nice footwork as a driver.
-Can operate at different speeds
-Can pass the ball impressively in drive and dish or post-entry situations
-Gets to the free throw line quite a bit
-Shows great feel and timing getting in passing lanes and rebounding in every stage of career. Has length, quickness and anticipation skills
-Shooting mechanics aren't bad from the waist up
-A year younger than the competition here

Weaknesses:
-Very limited scorer. Career 12.5 points per-40 on 39% TS% in every level he's played in
-Really struggles to convert inside or outside the arc.
-Gets to the rim consistently but doesn't finish strong. Tosses up weak floaters instead of going one step further for a layup. Lacks strength and toughness, but also doesn't have great touch around the basket
-Needs to improve his left hand. Finishes with right hand on left side of basket
-Hit just 33% of attempts inside the paint. Same story everywhere else he's played
-Career 16% 3-point shooter
-Has poor footwork and balance on his jumper
-Made just 56% of free throw attempts at U18s. Career 54%
-Extremely turnover prone at times. 5 turnovers per-40 and 22% TO% at U18s, which is low relative to his career rate
-Just an average defender. Very upright in his stance. Doesn't fight through screens. Lacks strength and toughness, but also intensity

Outlook: Elegant, creative guard who teases you with his ability to play point guard at his size. Had a poor tournament in terms of efficiency, but undoubtedly has talent which gives him some upside to grow into. Will likely fill out his frame down the road and look very impressive with his ball-handling and passing ability. Needs to fill out the rest of his game to graduate from prospect status to productive player.
Read full article