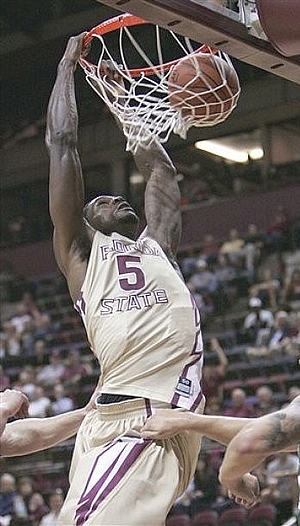 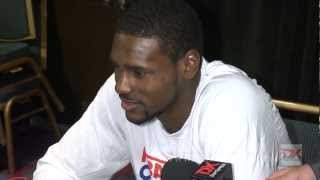 Coming off a solid junior season where he established himself as an interesting NBA prospect despite his very advanced age, Bernard James is having a similar season as a senior. James has seen a slightly expanded role due to the departure of Florida State's two leading scorers from last year, but his pace adjusted production and efficiency numbers are all the same or slightly down, as he hasn't grown much from a skills perspective.

Looking at James' game, his strengths and weaknesses remain largely the same, and he's being utilized in a similar fashion to last season. His defense and rebounding remain his most attractive assets from an NBA perspective, unsurprising due to his central role on the country's 5th best defense according to kenpom.com.

In the post, James does an excellent job utilizing his high motor and physical tools to disrupt the opposition, playing a rangy, aggressive style that fits well into his team's scheme. He's a tremendously instinctive shot-blocker, doing an excellent job rotating from the weak-side and being a major factor for opposing slashers to deal with inside the paint.

This is likely his most appealing attribute as a NBA prospect, as it's not difficult to envision this part of his game translating to playing against better competition.

James is prone to overplaying the ball on fronts, but it's done within a team concept and the rewards far outweigh the risks. His best chance to make an impact in the pros initially would be with a creative, defensive-oriented coach who could take advantage of his tools, and it will be interesting to see if James can find ways to be similarly effective if he plays in a more vanilla scheme.

In terms of his straight man-to-man defense, James is still a bit rough around the edges, being prone to being beat laterally both in the post and on the perimeter. He doesn't move laterally especially well, likely due to fundamentals (he rarely bends his knees) more than athleticism, and it's something that also shows up in the pick-and-roll game, where he doesn't always play with nearly the same aggressiveness as in the other areas of his defense.

This could be by design, but is something that would be much more important for him in the highly pick-and-roll oriented NBA, and teams will probably want to study this more in pre-draft workouts.

On the offensive end, James hasn't shown much new with his slightly expanded role, as he's seeing a similar possession distribution to last season while his FG% is down slightly from 65.7% to 60.7%. His post game remains extremely raw, and he is absolutely reliant on his dominant left hand, while he's still lacking in touch and balance on his finesse moves more than a few feet from the basket.

He shows good ability to finish with power, but struggles when he doesn't have great position or is tightly defended, where he just doesn't have the coordination or polish to consistently finish on hook shots and contested lay-ups.

James does a good job finishing on off-ball plays such as cuts, pick-and-rolls, and offensive rebounds, but this aspect of his game isn't emphasized highly in Florida State's offense, which isn't the prettiest or most effective you'd find in the NCAA.

This area of his game could certainly benefit from playing with a better cast of offensive talent and more open system, especially when he wouldn't be relied on to have the second most field goal attempts on his team, a tough burden for a player with his very limited skill set.

Because his post game likely won't translate very effectively to the NBA and there's only so much he can do to improve as an off-ball finisher, the most significant improvement James could make on the offensive end would be developing a respectable 15-foot jump shot, something he's shown no sign of in his two seasons in college.

His shooting mechanics, on the rare chance he takes a shot once in a blue moon, are not pretty to say the least, and he's shooting a very poor 52% from the free-throw line this season (up slightly from 50% last year).

Even with his limited basketball experience, he's fighting an uphill battle on this front, as it's tough to see him developing a respectable NBA jump shot from nothing given that he's already 27 years old.

Looking forward, James' size, athletic tools, defensive abilities, and intangibles give him a nice package that will make him attractive to many NBA teams. His value as a practice player and teammate could certainly help endear him to some coaches, especially ones who have creative defensive schemes they believe they could effectively utilize him in.

His advanced age will be a significant issue for many teams, but some playoff teams could actually view it as an asset, especially in combination with his off-court experience in the military. Given the historically awful success rate of late second round picks in the draft, James could be seen as an attractive choice to the right team, for the intangibles he brings to the table and the chance he could still continue developing despite his age.
Read full article 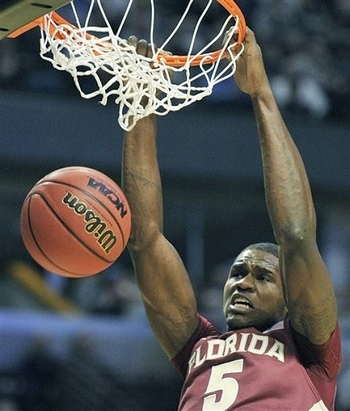 Showing year to year progression is crucial for any draft prospect, but perhaps none more-so than Bernard James. The skill sets he does have are ones typically valued highly, and he does a good job of playing within himself. Despite his advanced age, it's easy to forget how early he is in his basketball development process. That being said, with a player who may very well be in his physical prime by the time he enters the draft, it's crucial James shows substantial progression in shoring up his many deficiencies.
Read full article