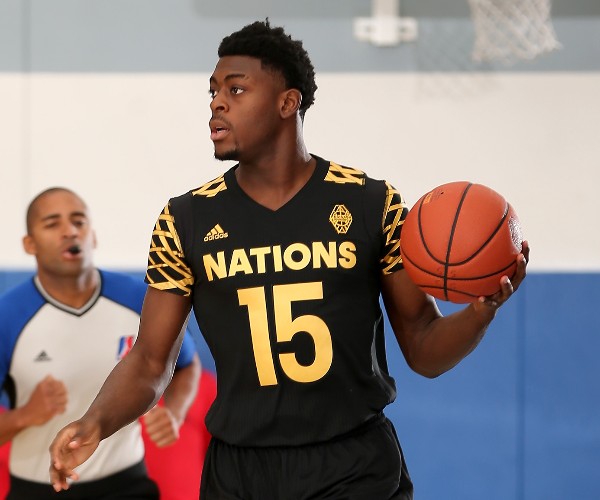 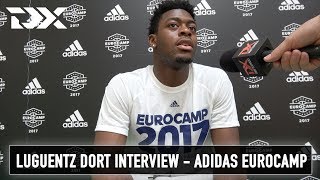 Mike Schmitz
@Mike_Schmitz
Luguentz Dort, Canada, SG, Class of 2018, Uncommitted, 17.9 Strengths
-Powerful guard with solid size at 6' 5, a strong, chiseled frame, and a 6' 8.5 wingspan. Somewhat similar physically to Arizona guard Rawle Alkins at the same age, although Dort is a bit more explosive.
-Has a strong first step and is able to play above the rim. Explosive leaper off of one or two feet when he can get momentum behind him. Powerful in transition filling the lanes or handling himself.
-Aggressive, downhill slasher. 56.4% from two in DX database games. Plays with a degree of toughness that's very intriguing when coupled with his physical profile. Doesn't shy away from contact. Fearlessly attacks rim protectors.
-Not an elite ball handler but knows how to navigate a ball screen. Most effective out of early offense step ups. Can change directions with basic crossovers.
-Needs to improve as a shooter but proved that his shot isn't broken. Gets good rotation. Capable when he shoots on the way up or at the peak of his jump.
-Very competitive defensively. Can really sit down in a stance and slide. Will be able to check multiple positions at the college level thanks to his feet, strength and length. Can play some small-ball four in the NCAA. Will pressure the ball. Plays with toughness. Active in the passing lanes.
-Should be able to contribute right away thanks to his physical attributes and ability to defendWeaknesses
-Struggles to make shots with consistency. Shoots on the way down. Arc varies shot to shot. Loses confidence after a couple of misses. Shoots it differently every time. Lifetime 20.9% from three and 62.4% from the free throw line. Pull up can be a bit slow. Wants to get to the rim rather than pull up. Lack of a consistent jumper handicaps him as a scorer in the half court.
-Decision making can improve. Has a tendency to get out of control on the move. Not going to give you much as a secondary playmaker. Score-first mentality. Would benefit from being able to make basic reads out of pick and roll or drive and kick situations, especially given how reliant he is on penetration.
-Can improve his ball skills and savvy out of pick and roll. Best in a straight line. Doesn't shift gears all that often. More power than wiggle.
-Looked very explosive in the BioSteel game but is better in space than he is in traffic. Would benefit from adding more finesse to his finishing game as the level of competition continues to rise.
-Will get caught on screens at times. Body type not all that conducive to getting skinny over screens.
-Leadership skills have room to improveOutlook
Dort was far and away the best player on the floor during the 2017 BioSteel game. Although it's an All-Star setting, Dort brought consistent energy on both ends, tried to tear the rim down on every drive and even shot it well from the perimeter. He looked ready to step into a college game tomorrow and contribute. His shooting stroke remains a major question mark in terms of his long-term, NBA projection but his motor, powerful physical profile, explosiveness, aggressive slashing and two-way potential certainly caught the eye of NBA scouts. Dort remains uncommitted, but will without a doubt end up at a high major program where he'll be able to contribute early on, likely playing up to four positions thanks to his frame and mentality. Dort helped himself more than any other player in Toronto.

Strengths:
-Solid measurements for a shooting guard, at 6'4 without shoes, with a big 6'8 ½ wingspan
-Chiseled 223 pound frame. Built like a fullback
-Aggressive player on both ends of the floor
-Powerful straight-line driver. Handful in transition, but will get to the rim in a straight line in the half-court as well
-Finishes through contact and draws tons of fouls
-Can play above the rim off two feet
-Can drive and dish a bit creating in a straight line
-Puts great pressure on the ball defensively.
-Crashes the glass aggressively
-Shows impressive toughness and intensity

Weaknesses:
-Lacks a degree of quickness and explosiveness. More powerful than freakishly athletic
-Gets out of control at times with his drives. Somewhat turnover prone
-Doesn't have a lot of wiggle with the ball
-Shooting consistency leaves a lot to be desired. Side spin rotation on his spot-up jumper with average touch. Pull-up stroke is slow and mechanical. Shoots a hard ball

Outlook: Dort had a strong showing at this camp, using his unique combination of power and aggressiveness to assert his will on the competition. More of a wing than a combo guard at this stage, Dort shows flashes as a ball-handler, shooter and passer but still has a ways to go in those areas. As a college prospect, there's quite a bit to like about Dort as he plays extremely hard and is a mismatch threat who can play anywhere from 2-4, but he'll have to continue to improve his skill-level, especially as a shooter, to draw looks from the NBA.
Read full article

Given the physical tools that Dort has, he can be a factor on the defensive end of the floor. He has the size, quickness, and strength to guard multiple positions, and throughout the week he took on the challenge of checking the opposing team's best player. He's a physical defender who moves his feet well, will get into ball handlers, and for a guard has some rare shot blocking ability, and even came through with some highlight reel weak side blocks. Dort is an impressive physical prospect for his age, and is on track to be a high level college player.
Read full article