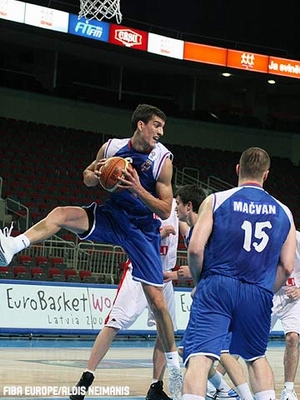 Matt Williams
@DraftExpress
Keselj, a Serbian native playing alongside a number of other prospects with Crvena Zvedza, has finished 26 of his 38 finishing attempts (1.33 PPP 1st), or 68% (1st). He also ranks 1st in transition shooting percentage at 76% (19/25). Keselj takes more than twice as many threes as Casspi (2.8 per game), and though he shoots only 36% on his catch and shoot jumpers, he ranks first for being fouled on 18% of his possessions. While Synergy has 21 of the 35 games Keselj has played in on file, the sample size again looks limited due to the tiny role Keselj plays for his team. Considering his physical attributes and style of play, though, he could be an interesting prospect to keep an eye on if he continues to improve his perimeter jumper.
Read full article

Jonathan Givony
@DraftExpress
The camp has been a lot keener on Keselj this year. In this edition he showed up after enjoying solid playing time in Germany, and the rustiness he showed the past year was gone. Left was his solid perimeter stroke, his excellent combination of size and athleticism, or his ability to run the floor. He needs to improve his ball-handling skills and his lateral quickness on defense if he wants to firmly establish himself on the perimeter as a legit small forward, but especially, he doesnt look like the smartest player around, perhaps lacking court awareness and basketball IQ to keep up with his physical gifts. Still, there are a lot of tools to work with here, especially for European basketball.
Read full article

Luis Fernández
@DraftExpress
After his very poor showing in Treviso and an entire season riding the bench in Spain, nothing much was expected out of Keselj. But even if his performance was very inconsistent, he had a few nice moments before falling injured, displaying some of his main strengths. The most intriguing part about his game is the fact that hes a nicely athletic 6-10 forward with skills to play on the perimeter. Still rusty and streaky with his long-range shot, he shows nice mechanics even in off-the-dribble fashion, looking more reliable from the mid-range area. Hes capable of putting the ball on the floor, although his ball-handling skills are limited so hes not very effective unless he finds a direct line to the basket. Defensively, hes quick enough to match-up against wings, as he showed defending Nicolas Batum in the game versus France. All in all, what Keselj needs is heavy minutes of playing time next season to settle down his game. He might now get that, as it was recently announced that hes being loaned by ACB squad Girona to the more appropriate level of the German league, where hell play with Koln. That has to be considered a smart move by all parties involved.
Read full article

Jonathan Givony
@DraftExpress
After spending a year on Akasvayu Girona's bench, Marko is looking extremely rusty in this camp. He doesn't look comfortable or confident at all, particularly with his off-the-dribble game. He always hesitates whenever he attacks his match-up, losing any chance of success-- but at least yesterday he was not bumping into his opponents as he used to do the first days. Besides, he's looking a bit slow in his drives, showing average ball-handling and very questionable decision making. A bit better in the shooting department, he's gaining accuracy as the camp advances, but nothing to get that excited about. He's a well-known solid shooter with three-point range, and he has only shown flashes of his ability.
Read full article

Jonathan Givony
@DraftExpress
The biggest disappointment of Day Two could very well have been the play of highly touted prospect Marko Keselj. The young Serbian forward has been rotting on the bench of extremely rich ACB league club Girona all season long, and looked completely out of sorts against the level of competition he faced in two games today. His ball-handling skills showed the most reason for concern, not being able to create his own shot without barreling into a defender or losing the ball out of bounds. He was way off on most of the 3-pointers he took as well, and didnt do much in other parts of the game to make up for his poor offensive display. Hopefully Keselj can bounce back tomorrow, because he surely didnt do much for his draft stock today.
Read full article