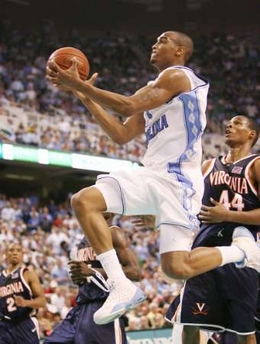 Matt Williams
@DraftExpress
Terry has played well in almost every game weve seen him in this Summer. His performances in Las Vegas last week and Salt Lake City this week show just how much difference a year can make to a young player. Terry was very solid last year, but hes a completely different kind of forward than he used to be. The former Tar Heel has always been noted for his athleticism, but he never had the ball handling to effectively use it in a half court setting, something that is no longer true. Terry looked very comfortable taking the ball to the rim, and while hes not a shifty guy thats going to change directions and sneak to the rim, his slashing ability has come a long way. He didnt have a great year from three point range playing for Aris Thessaloniki, and if Terry can add a consistent three-point jump shot to his game, it will only augment the progress hes made as a ball handler. His court vision lets him collect assists at a decent rate on this level, but hes more of a team player than a playmaker. Defensively, Terry showed the hustle and playmaking that weve grown to expect from him. Hes a quality shotblocker for a wing, and made some impressive plays today coming out of nowehere.
Read full article

Jonathan Watters
@DraftExpress
After a fairly invisible first half, Reyshawn Terry came alive and finished up having a pretty decent stat-line in the end. He showed up some of the same concerning lack of assertiveness that plagued him for much of this year, getting lost in the shuffle when he wasnt showing poor ball-handling skills creating his own shot from the perimeter. His pocket was picked on one occasion by Zabian Dowdell, and he forced his dribble on two other occasions to pick up a charge and a bad turnover. While extremely athletic, Terry is not the most fluid or reactive player in the world, not being the type of guy that can change directions on the fly while putting the ball in the floor or hanging in the air for a finish. He also went back to his old habit of fading away for no particular reason on his 3-point shot, something that he seemed to have corrected when we saw him a few weeks ago working out at Tim Grovers gym.

It wasnt all bad for Terry, though. Later on in the game, he picked up some easy baskets to get himself going, scoring two easy layups in transition and knocking down a wide open 12 foot jump-shot. He also played some solid defense at the small forward position on Quinton Hosely and Mohamed Abukar, who really struggled.
Read full article

Jonathan Watters
@DraftExpress
Reyshawn Terry had one of the stronger performances in his game, even though he left with a few minutes remaining after taking an elbow to his face, though it didnt appear that the injury will have a long-lasting effect. Terry did a really good job scoring the ball when it came to him, though he seemed to let things come to him a bit too much, not going after the ball when he didnt have it, not playing like the best prospect on his team should. He drifted for times, and should do a better job of coming to the ball in the remaining games here, so he can make a more significant impact on the offensive side of the court.

Terry scored in a variety of ways, first scoring off a crossover going left to right, laying the ball up with his left hand after a few dribbles, though his defender didnt really put in much effort on the possession. Terry next dunked the ball twice, once on a cut and once in transition, then went quiet for awhile. Later, he made a nice, long-strided drive, spinning from the top of the key and taking the ball to the hoop, laying it in with his right hand. He made a nice move in transition where he faked with the ball and put up a finger-roll, though he badly missed on that attempt. Terry missed his first two shots of the second half, a turnaround jumper in the lane and a spot-up 18 footer, though he drew a foul on a right-handed drive and scored on a spot-up three-pointer later in the game.

Defensively, Terry wasnt consistent with his effort on the perimeter defense, and he also got beat easily on a lazy fronting attempt in the post on one play, but he did make a few nice plays, including a pokeaway leading to a steal and drawing a charge on a rotation near the basket.

Terrys one of the better potential prospects here, and he had a decent start to his camp, though more assertiveness on the offensive end would help out his stock if he can do it while staying under control.
Read full article

Jonathan Watters
@DraftExpress
One player to pass the look test over the course of the first evening was the recent Tar Heel graduate. Terry showed up to camp looking more toned than ever, and sporting increased polish on his jumper. Throughout the first workout session, he might not have missed a single outside shot. Terry certainly has all the physical tools to play the SF spot in the NBA, and if he can follow through on tonights hot start with a couple of good shooting exhibitions, the first round isnt out of the question.
Read full article

Jonathan Givony
@DraftExpress
Terry only made it in for the 2nd day of workouts because of his graduation ceremony in Chapel Hill. What we did see in the short time we had to evaluate him left a great taste heading into the Orlando pre-draft camp, though.

Terry is basically the prototype for what an NBA caliber small forward should look like. He has excellent size, a great frame, nice strength, good quickness, and plenty of fluidity to his movements too. On top of that, the trainers here have helped clean up the footwork on his shooting mechanics considerably, to the point that he no longer flails his body around and instead sets his feet neatly with good balance and gets off a nice looking shot. It indeed fell with some solid consistency from what we saw. His ball-handling skills still need some polish, but its not hard at all to envision him having some excellent workouts after the pre-draft camp, as we talked about yesterday. He can help himself in Orlando considerably by playing great perimeter defense and knocking down his shots when given the opportunity to do so. Everything else beyond that would be gravy as far as his future role in the NBA is concerned.
Read full article

Landry Fields
@DraftExpress
Instead of starting off the Tar Heel section with a player that has already broken out, let's begin with a player who is certainly flying under the radar at the moment. Reyshawn Terry was nothing more than a cheerleader on last year's national championship squad, but has really come into his own over the second half of the 2006 season. Despite playing just 24 minutes per game, Terry is averaging nearly 15 points and 6 rebounds on the season.

Terry has prototypical small forward size, coming in at a chiseled 6'8. His athleticism is definitely NBA caliber, and while he still needs to work on polishing off his perimeter skill-set a bit more, his shooting percentages (50% FG's, 79% FT's, 40% 3-pt) are superb. He knows how to slash to the basket, has the potential to be an excellent defender, and really only needs major work as a ball-handler. On the whole, we have a player that is on the verge of emerging as a Caron Butler-style power wing.

We all know that Tyler Hansbrough is the top dog on this North Carolina squad, but don't be surprised to see Reyshawn Terry make a few waves of his own in this tournament. With another year of development, particularly to help reduce the metal lapses he suffers from at times, Terry could end up being a first round caliber prospect.
Read full article