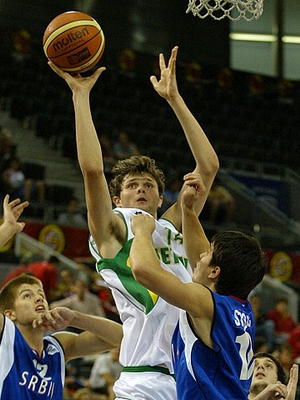 Luis Fernández
@DraftExpress
Vaidas Cepukaitis has regressed this season in terms of production in the Lithuanian NKL (second division), going from averages of 10.3 points and 7.6 rebounds in 22 minutes, to seeing his playing time decreasing to only 16 minutes, with 9 points and 5.3 rebounds per game. But it goes beyond the numbers, as hes barely showing any glimpse of expanding his offensive game (unlike what he had displayed this past summer). No drives and no low-post moves (at least in the few games weve seen of him this season), a few short jumpers, regular pick-and-roll situations finishing near the basket, and second-chance points off offensive rebounds. We were certainly expecting something more at this point.
Read full article

U-18 European Championship: The Bigs

Luis Fernández
@DraftExpress
Although we were growing a bit skeptical about a player who was showing the very same stuff since the first time we saw him a couple of years ago at the U-16 European Championship, Cepukaitis has delivered signs of real skill development in Madrid. Still a rebounding and shot-blocking specialist, with his mid-range jumpers as an offensive complement, he was more active trying some other things.

However, an important part of the intrigue comes with his physical development. Having grown a bit (he looks at least 6-10, and perhaps even taller) and enjoying great wingspan, hes slowly but constantly getting stronger, starting to fill out his excellent frame. Hes also a nicely athletic player, with solid leaping ability and interesting reactivity. Terrific tools to rebound the ball and block shots indeed. 9.1 captures and 2.9 rejections in less than 23 minutes per game sounds like outstanding production. The guy has a great sense of timing, shows very good position and, very important, the willingness to get it done. But hes not only about amassing stats; Cepukaitis is a very solid defender, physical in the low post, quick enough for a big guy, rather smart not to get easily cheated with fakes and pretty intense generally speaking.

Moving to the scoring department, he still primarily relies on his mid-range jumper, pretty solid and with a high-release point, both because of his mechanics and his leaping effort. But this time he showed a bit more ball-handling in order to gain an advantage in certain situations. Nothing really remarkable, but a couple of dribbles here or there, looking more aggressive than in the past, and also more active in the game. Indeed we could see him igniting the fastbreak by putting the ball on the floor without any hesitation. He even tried to play in the low post a few times, which is refreshing for a guy who almost refused any physical contact in the offensive end in the past (probably due to his lack of strength). He still looks rather unpolished there, anyway. Besides his mid-range stroke, he was quite productive in second-chance opportunities off offensive rebounds, showing nice touch in short shots.

Still looking like a pure role player, even if a very good one, Cepukaitis might be able to develop into a very intriguing player down the road.
Read full article

Luis Fernández
@DraftExpress
The skinny Lithuanian big man didnt shine too bright in the championship, but still delivered a good rebounding effort. He showed the same old strengths and limitations in his game. He severely lacks versatility on the offensive end, as he basically sticks to mid-range jumpers and some eventual garbage points. With poor footwork and sub-par strength, hes completely ineffective in the low post, while he doesnt show any ball-handling skills worth mentioning.

Things look better if we talk about defense and rebounding. Hes a pretty solid guy, who uses his mobility and excellent wingspan well. His rebounding production per minute was just outstanding. Still, were eager to see some noticeable improvements in a guy who skill-wise looks exactly the same as he did two years ago, even if he's developing nicely physically.
Read full article

Jonathan Givony
@DraftExpress
One of the centrepieces for Zalgiris dominance in the tournament, his defensive presence and rebounding ability provided great presences for his team. Cepukaitis is a 6-10 inside player with some athleticism and an interesting body (although still skinny, he has a decent frame, and a great wingspan).

Cepukaitis shows a nose and desire for the rebounds. He always throws both arms up high in the air searching for the ball and enjoys good hands to grab it. On defense, his wingspan is pretty annoying for his rivals, while he displays accurate lateral quickness for a big man. Offensively, hes a very limited player that usually settles for mid-range jumpers. He looks soft and extremely unpolished in the low post, suffering from very poor footwork. Also, he doesnt show any ball-handling skills to speak of.

The most concerning part about his skill set is that he doesnt seem to have improved much in the last two years, as he displays similar strengths and weaknesses than he displayed in the 2005 U-16 European Championship. At this point, chances are he will evolve into a good complimentary player; he would need to make dramatic strides in his game to emerge as a serious offensive threat.
Read full article

Luis Fernández
@DraftExpress
We finish with the Lithuanian bigs, a couple of very valuable players for this silver-medalist team. Vaidas Cepukaitis had already drawn attention last summer in León at cadet stage. Hes a 6-9 inside player with an excellent wingspan and solid athleticism. Not very skilled (hes still not much of a post player), most of his offensive production comes with mid-range jumpers that he releases from a very high vantage point. Where he really shines is doing the dirty work; rebounding and blocking shots. He has excellent timing and nice positioning. However, his potential looks a bit limited unless he grows (it could happen, he looks underdeveloped and hes a first-year junior) or develops his skill set.
Read full article

DraftExpress
@DraftExpress
Another player born in 1989, and another guy who will significantly grow, because he has a childs body. His role in this tournament didnt go beyond discreet, but he enjoys enormous potential with his great wingspan. He might easily reach the seven feet mark, and hes one of those players who does pretty well with everything he tries. He doesnt force things and his movements are decent. Of course, given his lack of weight, hes still very limited in regards to trying some actions. But again, what he does, he does it well.
Read full article