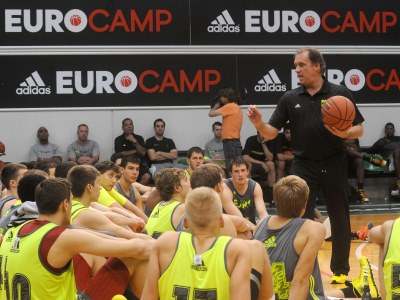 This was the final day of the EuroCamp for two significant 2013 draft prospects. Nemanja Nedovic sprained his ankle and will not be able to continue his participation here. He was supposed to fly straight to United States after completion of camp, but will now head back to Serbia for rehab instead. Not terribly serious, although likely keeping him out of action for no more than 7-10 days, it is a minor setback as far as his schedule is concerned considering how many NBA teams wanted to bring him in for a workout and how few days there could be remaining until draft day once he's back to 100%. The fact that Nedovic played a key role for Lietuvos Rytas in the Euroleague and tested as the best athlete here before getting hurt certainly work in his favor, as he's played well in plain sight for some time now and stood out athletically at both the 2011 and 2013 EuroCamps.

Lucas Nogueira is the second player whose camp has come to an end. According to his agent, his plan all along was to only play one day here, as he had previous scheduled a flight leaving today. Despite his early exit, Nogueira did what he needed yesterday to improve his standing according to teams in attendance. He'll now look to solidify a spot for himself as high as he can in the first round with strong showing in private workouts and interviews in the next few weeks in the US.

One of the additions to the adidas EuroCamp schedule this year was a practice featuring a collection of U16 prospects from across the globe. Adidas assembled an impressive group of prospects, especially from a physical standpoint.


After a long set of drills to warm up, former Panathinaikos assistant coach Dimitirs Itoudis gave the NEXT GENERATION group an in-depth clinic on the nuances of a half-court and full-court offense, which seemingly went completely over the heads of the 14 and 15 year olds. This came through no fault of his own as he faced the daunting task of trying to teach very young players, all of whom speak a different language, how to run a pro offense in just two hours. Though results were sloppy at times, the players were certainly challenged to come out of their comfort zones, even if the experiment didn't always look great.

-
Among those impressing were Acoydan McCarthy, the youngest player in attendance. Having made a name for himself at the ACB Minicopa, a youth tournament contested during the ACB Cope del Rey, McCarthy is an impressive player though he just turned 14. Standing 6'4, McCarthy's father is from Ghana and his mother in from the Canary Islands, explaining how he landed on the roster of Gran Canaria's youth teams. Possessing good scoring instincts and a solid feel for the game for a player so young, McCarthy is a player worth tracking as he matures.

Croatian forward Dragan Bender has an impressive frame and showed the ability to handle the ball. Able to play inside, outside, and use his length defensively, he is an interesting talent worth tracking.

Jacob Larsen, the younger of highly regarded 1994-born big man Rasmus Larsen, shares some similarities with his brother, possessing the same excellent size and a promising frame. Able to score from the outside, Larsen did most of his damage with his back to the basket. Backing players down and scoring over the top, Larsen showed good competitiveness and could emerge as an equally impressive prospect as his older brother down the road if he continues to improve.

Romaric Belemene looked out of place here, as he looks far more physically developed than any of the players here, which certainly raised some eyebrows. A freak athlete who finishes everything with a dunk around the rim, he possesses incredible physical tools for a player his age. He is not a terribly skilled player, but shows some promise as a catch and shoot threat from the midrange in addition to his athleticism. Scouts may question his age, but Belemene has tremendous upside if he continues to improve his skill-level.

-1994-born combo guard Boris Dallo played better than a he did in day one, scoring 12 points, pulling down 9 rebounds, and dishing out 7 assists to go along with 5 turnovers. Standing 6'5 with long arms, Dallo has excellent size for his position and shows promise as a playmaker in the open floor and on the pick and roll. Distributing the ball well today, he needs to continue to refine his shooting and ball-handling, but has the physical tools to be an interesting player down the road. Seeing inconsistent minutes in Pro A this year for Poitiers, Dallo is reportedly close to signing with Antibes, who will be promoted from Pro B next year.


-Brazilian big man Augusto Cesar Lima played much better today, scoring 14 points on 7/11 shooting and pulling down 4 rebounds in 19 minutes of action. Drawing a couple of charges and rotations over for a few weakside blocks, Lima brought great energy and made an impact defensively and on the glass. He was pushed around on the inside by some of the bigger players in attendance, and needs to continue improving his 234-pound frame, but had a strong showing defensive overall. Offensively, he shot a couple of midrange jump shots, but didn't connect, doing most of his damage right around the rim. Not having developed his skill level significantly, and still trying to carve out a significant role with Unicaja Malaga, Lima is essentially the same player he was two years ago, when he equally impressed with his Treviso performance. He's a hustle player, and while he has room to improve, there's value in 6'10 long, athletic players who compete. Scouts would like to see him bring the same intensity level every time he steps on the court as he did today, but there's little doubt he helped his stock among those who weren't intimately familiar with him as a prospect already.

-Ondrej Balvin has been one of the nicer surprises of the camp so far. He is not very mobile, but has a massive 7'2, 260-pound frame. Possessing a decent feel for scoring in the low block, Balvin has a good understanding of his role as a space eating center. Playing with a good motor he did a solid job protecting the rim and crashing the offensive glass. His size makes him a presence in the paint, and while his lack of speed limits his NBA upside, he appears to have the potential to have a fine career in Europe. Automatically eligible for next year's draft, he'll be a player to keep an eye on next year.

-
A member of the US Team comprised of mid-level recruits, 2014 high school prospect Devin Robinson had a strong showing today, scoring 12 points and coming up with 5 steals. A 6'8 wing extremely long arms, Robinson is a capable set shooter with a nice feel for the game. He isn't a great ball-handler at this stage, but found ways to score inside the arc in a variety of interesting ways. A fluid athlete with good explosiveness, Robinson appears to have plenty of untapped potential. Listed at 6'6 by most recruiting services, he is ranked #44 by 24/7, #106 by rivals, and unranked by ESPN in the class of 2014. He looks taller than he is listed at and is a significantly better prospect as well. Robinson told us his dream school is Georgetown but that they stopped recruiting him for some reason. Considering his showing here, it is tough to feel like that won't turn out to be a gaffe in the long run. Look for his stock to rise considerably among high school scouts as he gets better exposure down the road.

-The point guard of the US Team, Alex Robinson, set the tone in the US in their 74-53 loss to a much more experience U20 French National squad, dishing out 5 assists and coming up with 4 steals, albeit with 7 turnovers. An unselfish player with great athleticism and a solid motor, Robinson doesn't have a great skill level right now, nor does he have a great frame, but he seems like a player worth keeping an eye on moving forward, as his weaknesses are correctable.

-The US squad in general represented themselves very well, especially considering how late they were assembled and that they were only able to conduct one practice before getting on a plane. Adidas was initially planning on bringing elite prospects from their Adidas Nations program out here but were unable to due to conflicting dates with their camp in Las Vegas next week. Additionally, obtaining passports for these very young prospects was challenging as well. All things considered, the players competed well defensively and looked very unselfish on the offensive end, showing nice maturity with their approach, and generally doing a solid job considering the age disparity they faced. Word will certainly trickle back to the US.
Read Next...