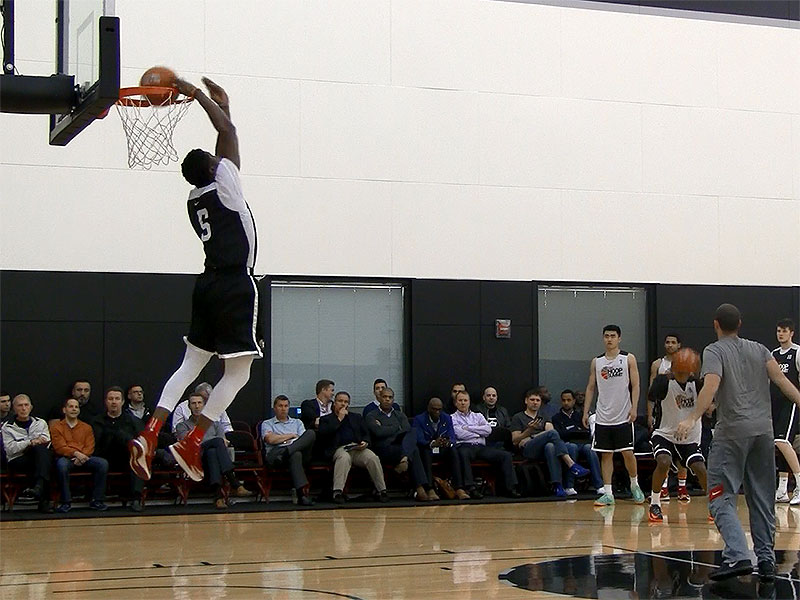 Matt Williams
@DraftExpress
The third day of the World Select Team's practices in preparation for the Nike Hoop Summit included a pair of standout performances.

The World Select Team practices on Wednesday followed the same schedule as they did the day before, starting off with the 11 players splitting into two groups to work on their half court sets 5-on-0, followed by position drills, shell defense, and a four quarter scrimmage. NBA decision-makers turned out en masse today as the majority of the General Managers who were not here to start the week arrived this afternoon in advance of practice, essentially filling the Trailblazers practice facility from wall to wall. In front of a nearly packed house, there were two players who were especially effective today, playing well as individuals, but also showing great chemistry working together on the pick and roll.

Emmanuel Mudiay and Nikola Jokic were exceptional during the competitive portion of practice, guiding their team to a 44-41 victory. Mudiay, who had a couple of great moments running the pick and roll yesterday, did most of his damage in transition today, but continued to flash a knack for making plays in the two man game in the half court. Mudiay's decision making and consistency have left something to be desired at times throughout his career, but this was a very steady performance for the SMU commit, as he made sound decisions with the ball for the most part, and flashed the court vision and explosiveness that makes him one of the most intriguing prospects in the incoming freshman class early and often. He is certain to become a lockdown multi-positional defender under Larry Brown, and shows a great attitude in running this World Team unselfishly and playing with a team-first attitude. The next step in his progression will be to improve the consistency of his outside shot, but with the improvements he's showing in his mechanics, it's likely only a matter of time until that happens.

Nikola Jokic was the beneficiary of many of Mudiay's best passes, but he also returned the favor on a number of occasions, finding Mudiay, among others, with some nifty passes of his own. Jokic, an exceptionally unique player, has an advanced feel for the game, recognizing the open man when the defense breaks down, and while he isn't very explosive and needs to get stronger, he has been easily the most productive player over the last two days thanks to his shooting ability and footwork in the post. Although he's gotten his shot blocked on a couple occasions, his footwork and instincts in the post have allowed him to find his angles to get his shot off or draw contact in close. He's such an unconventional and creative finisher that you never quite know what kind of trick he will try to pull off, which has left many rotating defenders baffled, while old-school NBA lifers just shake their heads and smile. Considering he was a relative unknown only a little over a year ago, Jokic has made a very strong impression to this point, and could gain plenty of traction among scouts if he can ride this momentum to a strong performance against the stacked US frontcourt on game day.

Sviatoslav Mykhailiuk didn't get a lot of opportunities to score, but he showed some impressive tools for a 16 year-old when he did. Standing 6'6 with a 6'6 wingspan, and a solid 191 pound frame, the Ukrainian shooting guard showed intriguing athleticism and the ability to create space or find the open man off the dribble. Throwing a number of terrific passes and knocking down a step-back 18-footer isolated on the wing in the clutch, he's stood out on the few chances he's had to make an impression. Competing regularly against older players may become the norm for Mykhailiuk who has had a number of college teams come out to the Ukraine to recruit him. The son of a professor, he attends a multi-lingual school in the Ukraine, speaks very good English, and is in position to potentially commit to and attend an NCAA institution starting this fall even though he'd only be 17 years old for the duration of his freshman year, making him one of the youngest players in college basketball history. The target of a number of top-level Euroleague teams as well, Mykhailiuk is one of the more intriguing 1997-born prospects outside of the United States, and his status as a recruit is something we'll be monitoring closely.

Trey Lyles struggled to score today, as his jump shot was not falling consistently during the competitive portion of practice. He was able to get to the line by being aggressive off the dribble, but he was unable to make an impact offensively as frequently as we've seen him in FIBA competition. Finishing within a point of the scoring lead in both the 2013 U19 World Championship and 2012 Nike Global Challenge, Lyles has thrived in settings similar to these before, but hasn't had the best week thus far, as he hasn't quite found his niche on the team, struggling to score inside the paint and not making his jumpers from the perimeter either.
Read Next...