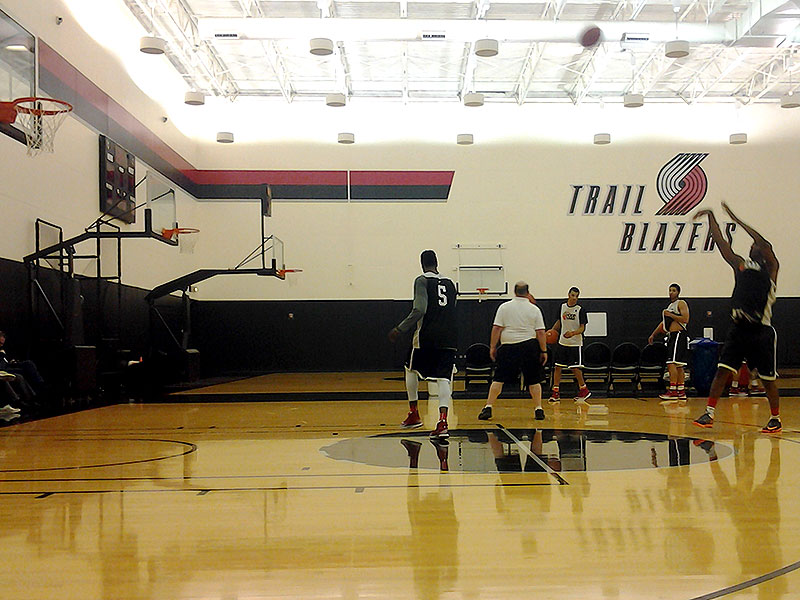 Matt Williams
@DraftExpress
The first day of practice at the Nike Hoop Summit is in the books as the World Select Team went through a fast paced 2-hour practice session at the Portland Trailblazers Practice Facility before the National Championship game tipped this evening.

The World Select Team always starts practicing day before Team USA even arrives at the event, and last year the momentum they found early in the week carried over into an easy win on game day. As with most day one practices in the past, the players here today were just starting to get comfortable with their surroundings, and the quality of play was up-and-down at times, but Head Coach Roy Rana has done a good job preparing his players for game night every year he's coached the World Team and kept things quick and to the point, letting the players get up and down competing 5-on-5, putting them through shooting drills, and focusing on some key principles on both ends of the floor. As practice wore on, the pace seemed to pick up as the players appeared to get their legs under them, which bodes well for the rest of the week.

With so many English speaking players on the international roster this season, communication was less of an issue for the World Team than it has been in the past, and the players seemed to take to the instruction they received as they focused on moving without the ball and helping defensively. Though the late-afternoon practice wasn't as intense or as those we'll take in later in the week, there were still a number of standout performers.

Perhaps the most impressive player was 17 year-old Jamal Murray, not necessarily for how he impacted the competitive action, but for just how well he shot the ball throughout the day. Throughout the course of the shooting drills, shell drills, and full court games, Murray shot the ball exceptionally well from the perimeter both off the catch and off the dribble to the point that it became surprising when he missed. Standing 6'4.5, Murray handled the ball at times in the competitive action, and while he struggled against the pressure applied on him by the explosive Emmanuel Mudiay, he made a strong first impression to the scouts in attendance seeing him for the first time with his shot making ability.

Gao Shang also shot the ball especially well in drills but wasn't able to find many opportunities during the brief scrimmages.

Karl Towns had a solid first day as well. Though his shot wasn't falling early on, he found ways to score during the competitive portion of the practice from the inside and outside alike. The 7-footer has a unique set of perimeter skills for a center, but the more he focuses on getting buckets with his back to the basket, the more effective he can be early in his career. He had one especially nice sequence where he used a second and third effort on the glass to finish a put back at the rim. He's not a great athlete, but his sheer size and touch inside are major pluses when he asserts himself.

Damien Inglis had a strong showing, primarily on the defensive end. A physical specimen with long arms, a very strong frame and solid speed, Inglis is not a freak athlete, but the combination of his size, lateral quickness, and desire to put the clamps on his man make him a lockdown defender in a setting like this. He made it very difficult for James Birsen to find daylight during the scrimmages at the beginning and end of practice.

Emmanuel Mudiay had some strong moments on both ends over the course of the day, showing why he's among the top high school players in the country. He picked the pocket of Jamal Murray on a couple occasions and knocked down a few jump shots when the team went 5-on-5 with good mechanics. A special athlete, if Mudiay can become more consistent with his perimeter stroke and intensity, he has the chance to be a tremendous player down the road.

Clint Capela finished a few lobs emphatically above the rim over the course of the day. He doesn't have the highest skill level, but his length, quick feet, and impressive leaping ability allow him to make plays around the rim and on the boards on both ends of the floor, especially when he's dialed in and playing hard.

With another practice scheduled for tomorrow evening, we'll check back in to see how the World Select Team progresses throughout the week.
Read Next...