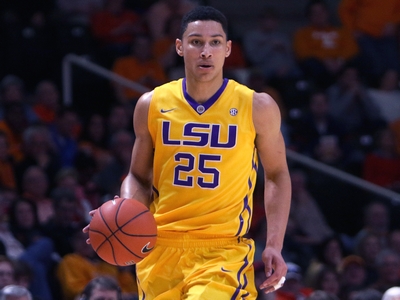 Ben Simmons is fresh off one of the most productive college seasons in recent memory, being the first player to average over 19 points, 11 rebounds and 4 assists per game since Ron Harper did so as a senior at Miami Ohio back in 1986.

While Simmons put up terrific numbers individually, he struggled to help his team win games consistently at the college level, finishing the season a disappointing 19-14. After a blowout loss to Texas A&M in the SEC Tournament semifinals, LSU's season came to an end and Simmons' future became very clear when it was revealed he will be hiring LeBron James' agent to represent him in the draft.

He has ample size at 6'10, and a sturdy frame at around 240 pounds. While he does not possess great length, with a wingspan measured between 6'11 and 7'0, he is one of the most fluid and coordinated athletes you'll find.

Simmons has superb quickness, incredible body control, long strides and can operate at different speeds in a nearly unprecedented way for a player his size. Few players in recent memory are as effective at grabbing a defensive rebound and igniting the fast break as Simmons is, and a sky-high 26% of his offensive possessions comes in these situations according to Synergy Sports Technology.

In the half-court, Simmons is much more of a mixed bag. He saw some success operating with his back to the basket this season, but struggled when asked to act as a primary ball-handler and facilitator in pick and roll and isolation situations, partially due to LSU's very poor spacing.

Simmons' best traits in the half-court revolves around his tremendous ball-handling and passing ability, as he has outstanding court vision and a knack for finding open teammates with bullet passes. He's one of just five players (Luke Walton, Danny Ferry, Nick Thompson and Jerald Honeycutt) in our extensive NCAA database to average over 5 assists per-40 minutes while standing 6'9 or taller, and is the only one to do so as a freshman.

While Simmons doesn't show much range as a shooter, he has excellent touch with either hand around the basket, being highly creative and acrobatic with the way he can finish plays, sometimes above the rim with a head of steam. His average length and propensity for avoiding contact around the rim hurts his percentages as a finisher inside the paint (he converted a just-decent 55% of his attempts here in the half-court), but he is such a mismatch at his size that he's able to draw a huge amount of fouls and free throw attempts (9.8 per-40) to compensate.

He also shows some ability to score inside the post with right-handed jump hooks and excellent footwork. He is devastating operating in isolation situations from the mid-post area as he's simply too quick and too creative with the ball for most big men to stay in front of. College opponents negated that somewhat by putting smaller players on him as the season moved on and double-teaming the post, but things could be different in the NBA with better spacing, superior teammates and more creative coaching adjustments than we saw this season.

While Simmons makes his free throw attempts at a decent rate (67% at LSU), his outside shooting has always been considered the biggest weakness in his game. He's a 12/50 (24%) 3-point shooter in the 74 career games we have data on since he first appeared on the scene at the 2012 FIBA U-17 World Championship, and hasn't shown much progress in the past four years in this area, which is a major red-flag in today's NBA.


Opponents were able to neutralize him very effectively in the half-court as the season moved on, simply backing five feet off him. Simmons would respond by getting very passive in turn, looking very conscious about firing up jumpers, even late in games when his team desperately needed him to be aggressive. To reach his full potential and effectively be paired with other players, Simmons will likely either need to significantly improve his jumper, or be surrounded by plenty of shooters at all times as a primary ball-handler.

Defensively, Simmons has elite instincts and anticipation skills, as evidenced by the terrific 12.9 rebounds, 2.1 steals and .9 blocks he averages per-40 minutes. He sees loose balls coming off the rim in an uncanny way, and is able to react and go grab rebounds before anyone else. When engaged and motivated, Simmons shows the ability to defend a variety of different positions on the floor, moving his feet well enough to stay in front of wings and even guards, while possessing the strength needed to slow down most power forwards in the post.

The problem is that Simmons rarely plays up to his full potential on this end of the floor. He often looks very lazy here, not making any effort whatsoever to close out on shooters and avoiding contact and physicality in a very concerning way when challenged by opposing players. He often resorts to swiping down at the ball aimlessly in hopes of generating a steal, instead of getting in a fundamentally sound stance and trying to stop his man from scoring.

While the red flags around Simmons' defense were there from the moment he stepped on the floor at the college level, as LSU's season went on, he gradually gave less and less effort here, even in his team's most important games, which raised serious question marks about his competitiveness in NBA circles.

There's little question that Simmons was unfairly labeled as a generational talent going into his freshman season by uninformed voices in the media. Now NBA teams picking at the top of the draft in June will need to figure out just how high his long-term upside is, and how well he fits in with their existing roster.

Simmons' talent-level is unquestionably extraordinarily, and he could still develop into an incredibly unique mismatch in the NBA, particularly if he shows a willingness and openness to address his flaws. He'll have to improve his approach to the game significantly, though, if he's to reach his full potential.More DX Scouting Reports and Video Breakdowns:
-Michigan's Caris LeVert
-Louisville's Damion Lee
-Florida State's Malik Beasley
-Florida's Dorian Finney-Smith
-Cibona's Ante Zizic
-Estudiantes' Juan Hernangomez
-Oakland's Kay Felder
Read Next...