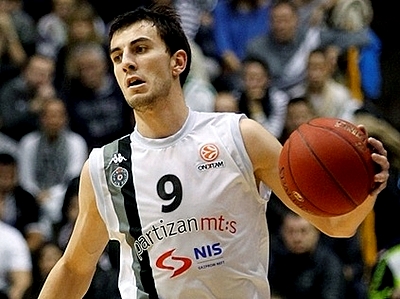 Mike Schmitz
@Mike_Schmitz
Leo Westermann has blossomed into one of the best prospects in Europe playing for Partizan Belgrade in the Euroleague. We analyze his progress with a video and scouting report.

Sometimes a change of scenery is necessary for a prospect to reach his full potential and be viewed in a different light by the global basketball community.

In leaving ASVEL Villerbaune for Partizan Belgrade this past summer, Leo Westermann made an unprecedented move for a 20-year old French prospect considering the significant transition he would have to make on and off the court.

Moving from Western Europe to the Balkans and having to adapt to an entirely different style of basketball, type of coaching, language and culture along the way is something that most players his age and with his background would not have the courage to do. However, the risk appears to have paid off extraordinarily well and is likely to change the complexion of his career. 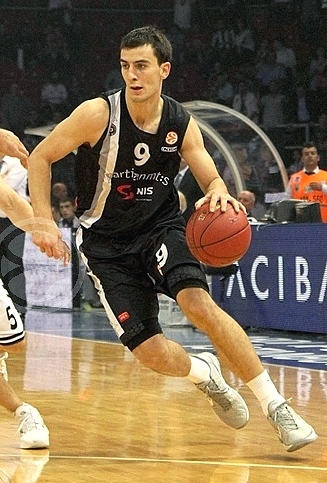 Starting at point guard and playing 29 minutes per-game (for the team that's largely considered the best in Europe at developing young players for more on why, read the comprehensive article we wrote from Belgrade in 2010 on the club and its iconic coach) at the highest level of competition found outside the NBA, Westermann has significantly improved his NBA prospects and at the very least cemented himself as a serious target for all the top Euroleague clubs moving forward.

Shouldering significant offensive responsibilities on the youngest roster in Euroleague history according to their coach, Westermann's numbers (10 points, 4 assists, 2.7 turnovers, 37% 2P%, 43% 3P%) are indicative of the difficult transition he's faced moving from Pro A France to the Euroleague, especially for those that are not well versed in the ins and outs of the European game. Watching his film tells a different story though.

Measuring 6-7 in shoes at the Nike Hoop Summit last spring, Westermann is nevertheless Partizan's primary ball-handler and facilitator, seeing more than half his offensive possessions running the pick and roll, where he shows tremendous potential. With his choppy footwork, terrific timing, and excellent basketball IQ, Westermann's ability to create offense has improved significantly this season under Dule Vujosevic, despite the stark increase in level of competition he's facing and the fact that his coach does not speak a word of English or French.

Partizan players endure long practice days heavy on conditioning, fundamentals and skill development, and Westermann's superior work ethic and mental toughness have allowed him to embrace and soak in these long sessions, which sometimes run 5-6 hours at a time. Westermann's athleticism appears to have improved considerably since the last time we saw him at the Nike Hoop Summit in April, and his confidence and aggressiveness have never been higher.

What stands out about Westermann's style of running the point guard position is the terrific blend of creativity, maturity and intelligence he displays, something you rarely see in a player his age at this size. He's a very good ball-handler, and while not overly quick or explosive, his ability to change speeds and read opposing defenses allows him to play at a very unique pace that makes him difficult to fully shut down.

Westermann gets his teammates easy baskets on a regular basis with his superb timing and court vision. He passes ahead in transition beautifully, makes skip passes over the top of defenses to open shooters, and has a knack for spoon-feeding his big men right underneath the basket with alleyoop lobs or post-entry bounce passes off the pick and roll.

Westermann's jump-shot has been somewhat streaky over the course of the season, something that has been the case for much of his career. While he was able to convert 43% of his 3-pointers during the Euroleague regular season, he's only made 29 of his 93 (31%) overall jump-shots (include 2-pointers) when taking Adriatic league competition into consideration.

Part of the reason for that is the role Westermann plays on this team. As the only real creator on Partizan's roster, he's forced to take quite a few tough pull-ups every game with the shot-clock winding down. Two-thirds of Westermann's jumpers have come off the dribble thus far according to Synergy Sports Technology, but he hasn't been terribly consistent with his feet set either, something that looks highly correctable considering his quick release and excellent shooting mechanics. It's not a stretch to ponder whether playing a smaller role where he isn't forced to shoulder as much playmaking responsibility would help his percentages.

One area where Westermann has struggled this season (and for his entire career in fact) and may never be a standout is s a finisher inside the paint. He only converts 51% of his attempts around the basket, and doesn't get to the free throw line at a high rate. Not possessing great length, strength or explosiveness, he has a difficult time finishing over athletic big men in traffic. He seems to realize this and often drives to the basket with the sole intent of dishing off to a teammate as soon as the defense rotates, which can make him somewhat turnover prone at times (he's averaging over four turnovers per-40 minutes). With that said, he was often asked to do far more than he likely should as the primary ball-handler on a young roster that was regularly overmatched talent-wise in the Euroleague.

While it's relatively easy to see Westermann fitting into a NBA roster offensively with his high skill-level and off the charts basketball IQ, it's on the defensive end of the ball that scouts have their biggest question marks. Westermann has made strides on this end of the floor this season as well, as he puts an excellent effort in, moving his feet well, putting solid pressure on the ball and showing terrific awareness and instincts anticipating his opponent's next move. With that said, he gets beaten off the dribble a fair amount at the Euroleague level, as he possesses just average lateral quickness, while his short wingspan and poor frame don't do him any favors in fighting through screens and contesting jumpers on the perimeter. He averages nearly five fouls per-40 minutes and is regularly targeted by opposing coaches due to his struggles staying in front of smaller guards.

Westermann's professional stock improved considerably with the fearless way he approached Partizan's Euroleague campaign, which unfortunately came to an end this past week when his team narrowly lost to Bamberg in overtime in Germany, their third overtime loss in just 10 games.

Westermann is a little bit different than some of the bigger European guards that have come before him in the sense that he's got good toughness and really wants to play solid defense. Nevertheless, he probably won't fit on every NBA roster due to his unique style of play and limitations, and will need to be paired with the right teammates who can help compensate for his shortcomings.

The success of other big European guards in the NBA this season, such as Alexey Shved, will likely help his cause, as will his very flexible situation with Partizan. A NBA team picking in the late first round or early second that is short on roster spots can elect to draft him and leave him over in Europe for a year or more to continue to develop on someone else's budget playing against outstanding competition on a nightly basis. Or if they prefer, they can bring him over right away.

Only becoming automatically draft-eligible in 2014 as a 1992-born prospect, Westermann will need to decide whether he wants to enter his name in the 2013 draft and test his value this spring. It's not out of the question that his stock could rise even higher with another strong Euroleague campaign next year.
Read Next...