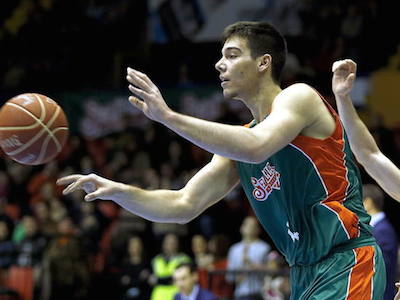 Emerging as one of the top rebounders in the ACB this season, Guillermo Willy Hernangomez has solidified himself as one of the top center prospects in Europe, averaging 10.1 points and 5.7 rebounds per-game for EuroCup participants Sevilla.

A staple of the Spanish Junior National Teams for the last five years, Hernangomez has been a steady contributor inside at the youth level. He had his best performance at the 2013 FIBA U19 World Championship, averaging 26.3 points and 13.2 rebounds per 40 to rank among the top-10 performers in both categories. Growing up playing for Real Madrid, Hernangomez made his ACB and Euroleague debuts in 2012, but played primarily for the Spanish powerhouse's second team in the fourth division until the 2013-2014 season. Fresh off his performance at the U19 World Championship, Hernangomez extended his contract with Real Madrid that summer, subsequently being loaned to Sevilla where he saw rotation minutes at the ACB level for the first time last season.

Staying on loan with Sevilla this season, Hernangomez has made the most of his opportunity to grow into a reliable center competing against quality competition. Turning 21 later this year, the last two seasons have been formative ones for the young center, who to that point, was largely untested at the senior level. Ranking as one of Sevilla's top scorers in ACB play, functioning as their primary post up weapon, and being the main big man stepping out to set screens in their pick and roll heavy offense, the young center has matured considerably in a fairly short span, part of the reason the Madrid native opted to take a serious run at the 2015 NBA Draft instead of waiting until he would be automatically eligible next summer.

Standing 6'11 with a 7'1.5 wingspan and a 255-pound frame, Hernangomez has nice size for a center. He's not a particularly explosive athlete, but moves fairly well for his size and has plenty of potential to continue getting stronger.

Hernangomez's physical profile, coupled with his budding offensive skill level makes him a serviceable, fairly well-rounded offensive center, even if he still has plenty of room to grow. Half of Hernangomez's possessions come from a balanced diet of post ups and rolls to rim, with another significant portion of his offensive production coming from cuts and put backs. He was the only player in the ACB to use 80 total possessions in both situations according to Synergy Sports Technologyevidence of how his ability to exploit his size and mobility helped him on the offensive end.

In the post, the near 7-footer does his best work before the catch. Able to simply bury defenders under the rim times, he makes things easy for himself inside by being physical. More than just a bully, Hernangomez possesses good touch, uses fakes well, and has a variety of moves he uses to score over either shoulder with his back to the basket. Shooting a solid, but not spectacular 44.7% from the block, he struggles to score over length at times and has plenty of room to tighten up his one-on-one scoring repertoire. Nonetheless, his footwork and the variety of moves in his arsenal leave some room for optimism about his ability to create for himself at the NBA level.

Leading the ACB in points scored rolling to the rim this season, Herangomez gets around 61% of his field goal attempts in finishing situations around the basket, and coincidentally shoots an impressive 61% on those looks. Presenting a big target diving to the rim and making a nice effort to keep the ball alive crashing the offensive glass, the young big man does a great job moving without the ball in his hands showing good timing and a craftiness finishing inside that you don't often see from players his age. A mostly below the rim player, it will be interesting to see if Hernangomez's explosiveness improves as his body continues to mature, as he will likely face some growing pains adapting to the athleticism of NBA defenders.

Though he only made 33% of the 40 jump shots he attempted this season, Hernangomez also has some upside as a shooter. He shot 72% from the line this season and the touch he flashes away from the rim could allow him to become a serviceable midrange shooter and pick and pop threat down the rim.

On the whole, Hernangomez's 53.7% field goal percentage and 13.4% offensive rebound percentage rank 3rd and 6th in the ACB respectively. For a player just two years removed from the EBA, he's shown terrific promise on the offensive end. He isn't without his faults, however, as his 3.9 turnover per 40 minutes reflect his struggles as a passer. He's actually not all that turnover prone operating one-on-one in the post, with many of his turnovers resulting from mistakes on the perimeter or simply from poor execution.

Hernangomez's biggest weaknesses come on the defensive end. He's a below average rim protector who struggles a bit with the fundamentals at this stage. Hernangomez's foot speed gives him some upside as a pick and roll defender and he should improve his understanding on this end as he gains experience, but his lack of length and athleticism limits his potential as an individual defender regardless. He benefited this season playing alongside Kristaps Porzingis, who provides the ideal shot blocking presence from the power forward position to help compensate for his limitations.

He's also just an average defensive rebounder. His below average explosiveness hurts him as he doesn't gain position well enough as soon as the shot goes up to get by on instincts alone.

Arguably the top remaining prospect from the relatively shallow 1994 international age group that already has sent Clint Capela, Giannis Antetokounmpo, and Jusuf Nurkic to the NBA, Hernangomez would be one of the more interesting draft and stash options available in the 2015 NBA Draft if he chooses to keep his name in. Being a free agent this summer, he's able to come to the NBA right away if a team is interested in that as well. He may lack elite upside as a defender, but his promise offensively coupled with his size gives him plenty of intrigue.
Read Next...