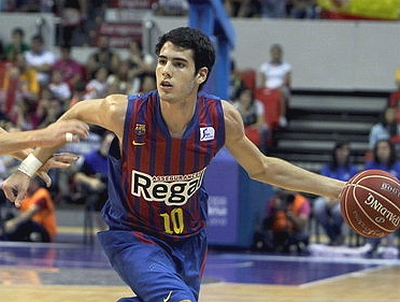 Mike Schmitz
@Mike_Schmitz
Alex Abrines is one of the top young prospects in European basketball, and he's decided to keep his name in the draft despite seeing inconsistent playing time this season in Barcelona. What type of prospect is he, and when can NBA teams expect to get him over if they decide to draft him?

One of the top international prospects in the 1993 age group, Alex Abrines is a talent NBA teams have been keeping tabs on for a few seasons now. Seeing his first significant action as pro in 2010 for Clinicas Rincon, the LEB Gold affiliate of Spanish Euroleague club Unicaja Malaga, Abrines made a name for himself at the 2011 FIBA U18 European Championship where he averaged 13.4 points and 4.8 rebounds per-game, leading the Spanish Junior National Team to a gold medal and earning MVP honors. 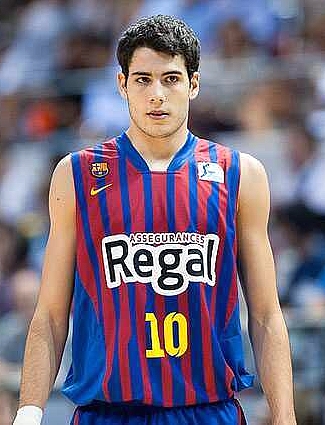 Making his ACB and Euroleague debut for Malaga while receiving heavy minutes in the LEB Gold the following season, Abrines thrived as Clinicas Rincon's first option in the second division, averaging 13.4 poitns per-game in 16 appearances, but also had a signature performance in the ACB, scoring 31 points against Estudiantes in mid-March. Instead of building on his very promising campaign with Malaga, he surprised many this past summer by opting to leave Unicaja for a huge four year contract in Barcelona.

Joining one of the richest and most talented teams in all of Europe, Abrines carved out a small role for himself as a reserve shooting guard in his first season in Barcelona, averaging 11 minutes per-game in 47 games in the ACB and Euroleague, out of a total of 79 that Barcelona played this year. Despite being in and out of his team's rotation, Abrines opted to test the water and explore his options in 2013, likely in hopes of going undrafted or at the very worst getting picked in the second round.

Standing 6-5 with a skinny frame, Abrines possesses similar physical attributes to those of countryman Rudy Fernandez. Much like the former Nuggets guard when he was the same age, Abrines needs to continue getting stronger to prepare himself for the NBA, but has passable size for his position and is a fluid athlete, proving capable of playing above the rim on occasion.

By no means an imposing physical specimen by NBA standards, Abrines does the vast majority of his scoring at this stage of his career with his jump shot, as perimeter attempts account for more than 75% of his total shots, the majority of which come from beyond the arc. The 19 year old is a streaky shooter with good range, having made 34% of his catch and shoot jumpers on the year. He takes some difficult, off-balance jumpers on occasion, but is adept at working off screens and shoots the ball with fluid mechanics and a high release point in rhythm when spotting up. Even coming off the bench for small spurts, Abrines doesn't hesitate to come into a game and immediately start firing away. He possesses great confidence in his scoring ability and will take and make plenty of jumpers with a hand in his face, showing no fear whatsoever regardless of the situation.

Abrines is not asked to create his own shot on a regular basis playing alongside the likes of Marcelo Huertas and Juan Carlos Navarro. His 5-21 shooting on pull-up jump shots this season is as accurate a reflection of his small role as it is his midrange scoring ability. A steady ball-handler with a decent first step, Abrines is not overly explosive off the bounce or the type of player who will regularly break down defenders and create separation one-on-one, making you wonder if he might get pigeon-holed in a one-dimensional role down the road.

Abrines is, however, an opportunistic scorer in transition and around the basket. Doing a good job running the floor, cutting backdoor off the ball, and taking what defenders give him when they close him out, Abrines shows good instincts and some creativity as a slasher. He moves off the ball intelligently, showing great timing and patience reading defenses and moving into open spaces as the paint opens up, which is intriguing considering his young age. Connecting on 64% of his shots around the rim and eager to elevate and try to dunk the ball when given the chance, Abrines makes the most of the few opportunities he finds around the rim.

An extremely confident offensive player for his age and experience level, Abrines showed plenty of promise in the small role he played, but did not have a chance to truly blossom on a stacked roster in the midst of a somewhat tumultuous season for Barcelona. Nevertheless, his ability to spread the floor and make shots from the perimeter is appealing, while his high basketball IQ indicates he has more room for growth as his skill set and body mature.

Defensively, Abrines plays with very good intensity for a player his age, but lacks great upside on this end of the floor. He chases his man tirelessly off of screens and shows plenty of hustle, but his lack of strength, length and athleticism are apparent at times. He manages to hold his own for the most part thanks to his effort level in Europe, but will need to continue to get stronger to help him deal with bigger, more explosive wings he'll be asked to defend in the NBA.

Abrines is a unique prospect for NBA teams to evaluate on draft night, as his lack of experience and production make it difficult to assess how much room for growth he might have as he continues to mature. Finishing the season extremely late due to his team playing in the ACB League Finals, he was not able to attend the adidas EuroCamp and declined to fly to the States to meet with NBA teams or conduct any private workouts, as he's trying to depress his draft stock as much as possible in hopes of going undrafted or at the very worst in the second round.

Further complicating matters is the fact that Barcelona announced that Abrines is suffering from insertional patellar tendinopathy in his right knee as soon as the season concluded, which has been a recurring issue for him over the years, and will keep him out of action for eight weeks and force him to miss the U20 European Championships. Whichever NBA team picks Abrines will have to do so without the luxury of a medical examination or an interview, and without any clear picture about when he might come to play for them, if at all down the road.

Regardless, at a certain stage in the draft, the risk outweighs the reward for someone like Abrines, who is considered by many to be the best young prospect in Spain these days. NBA teams have tremendous respect for the Spanish school of basketball, and at 20 years old, there's no telling what kind of player they could develop Abrines into a couple of years down the road, and how valuable his draft rights might be by then.
Read Next...