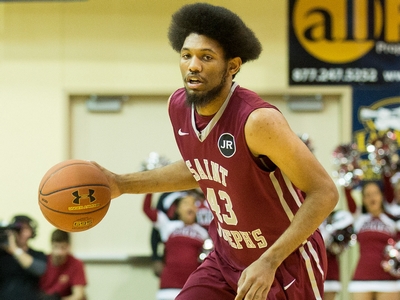 Saint Joe's guard DeAndre Bembry helped himself as much as any other player at the Nike Academy in Santa Monica, CA. Measuring a solid 6' 6 in shoes (albeit with an average 6' 8 wingspan and overall frame), Bembry displayed a very versatile offensive skill set that, when coupled with his athleticism, could make him a very interesting prospect in the 2016 NBA Draft if he puts together a productive junior season.

Bembry played above the rim in transition, facilitated out of pick and roll sets and isolations in the half court, moved actively off the ball, and made enough shots (both off the catch and off the dribble) to generate some hope for him developing into a more reliable shooter. Bembry may not be an elite athlete at the NBA level, but he shows great speed in the open court and is able to play above the rim with relative ease in the half court.

But what stood out the most was Bembry's ability to make plays with the ball. Although he's not an overly advanced ball handler, the Charlotte, NC native was very comfortable distributing on the move, hitting the roll man in stride, locating spot up shooters in traffic and even throwing lobs on occasion.

Bembry is a bit stuck between the two and the three from a physical standpoint, but his natural passing instincts and ability to play with the ball helped ease some of those concerns. Bembry also has the lateral quickness to defend shooting guards at the NBA level, which more often than not defines a player's position more than anything he does on the offensive end.

What will sway Bembry's stock maybe more than anything is his jump shot, an area where he's had a lot of peaks and valleys during his two seasons at Saint Joe's. Bembry is a career 33.7% 3-point shooter (on 261 attempts) and 60.5% free throw shooter (324 attempts), but he shot the ball a bit better than his numbers suggest over the course of the three-day camp.

Sporting a fairly wide stance and an off-centered release point, Bembry certainly had his ups and downs making shots from the perimeter, but he does get very good rotation on the ball as it comes out of his hand smoothly considering the release point. The 6' 6 guard/forward made a pull up three, a step back jumper going left, and knocked down a few catch and shoot threes with a hand in his face.

Bembry certainly wasn't immune to an airball or two or a bad miss left off the bounce, but there's definitely more potential as a shooter than his numbers suggest.

Bembry has the size, athleticism, and playmaking ability scouts like to see from the two-guard position at the NBA level, and if he turns in a productive junior season highlighted by an efficient percentage from distance, he could very well work his way into consideration by the time the 2016 NBA Draft rolls around.

Few players in college basketball have more fun playing basketball than Oklahoma's Buddy Hield. The soon-to-be senior guard and Bahamas native is the consummate glue guy, constantly competing, talking and smiling in the heat of the battle  all important qualities for a player who (at best) projects as a rotation player. Hield isn't exactly great in one area, and he doesn't quite have the physical tools to make up for his lack of an elite NBA skill, but he competes, plays the right way, and actually has more ability with the ball than he has shown at Oklahoma.

Hield played a lot of point guard in games and competition, handling comfortably in ball screens and changing speeds and directions effectively. He's a very capable passer on the move and even knocked down a couple of step back jumpers, one right in DeMarcus Cousins' face.

Hield also showed an ability to defend both guard spots with his strength, length and energy. As is the case with a lot of his skills, Hield isn't quite elite at guarding either position, at least from an NBA standpoint. Hield also struggled to make shots consistently from the perimeter, spraying the ball left and right in both spot up and off the dribble situations. When Hield shoots it on balance with a compact release, he's very effective, but he tends to lean too much on his shot and eventually shoot a bit of a push shot, ultimately leading to less than desirable results.

As was the case last year at Oklahoma, Hield did do a lot of damage handling and filling the lanes in transition, but he'll really have to become a knockdown shooter to be a consistent threat in the half court. His improved handle and playmaking ability is certainly a plus, but he doesn't quite have the burst or offensive creativity to consistently be called upon to create offense in the half court, making his jump shot that much more important.

Despite some of his shortcomings, there's no doubting Hield's likability and intangibles, which, along with his current skill set, give him a great chance of at least making an NBA roster and sticking if he's able to carve out a niche.

If the Nike Academy tracked individual player wins throughout the course of the camp, Brogdon would have most certainly been the leader of the pack. The 6' 5.5 bowling ball does so many little things that translate to victories, and it's no surprise that, given his history of winning at Virginia, it translated to the camp setting.

From a physical perspective, Brogdon has some strong attributes for an NBA two-guard. He has good size, great length, big hands and the lateral quickness to really get after it on the perimeter. Brogdon plays with a level of toughness and intensity coaches will fall in love with at the pro level. He's always in the right place at the right time on defense, and rarely commits a bad turnover on offense. He's comfortable operating as a secondary ball handler in the half court and just knows how to play.

Brogdon also shot the ball extremely well from the perimeter, despite his less than stellar mechanics that feature an ugly hitch and a flat trajectory. It isn't pretty, but Brogdon has fairly nice touch overall, evident by his 87% career free throw percentage.

With all of that said, Brogdon doesn't quite have one NBA-level skill (aside from defense) that he can hang his hat on at the next level. He's an average athlete by NBA standards and will have some trouble both getting his shot off against high-level wing defenders and finishing at the rim consistently.

Brogdon can make an open three, but his shot mechanics don't lead you to believe that he'll be able to knock down shots consistently from the NBA line with athletic guards with 7-foot wingspans closing out quickly. Brogdon brings a level of toughness, IQ, and physicality to any court he steps on, but he's no lock for the NBA at this stage as a jack of all trades, master of none type, who will already be 23 years old by the time the 2016 NBA Draft rolls around.

Amongst a large group of collegiate players who all (for the most part) played fairly unselfishly, talented LSU freshman Antonio Blakeney stuck out at times due to his questionable shot selection and tendency to try and play hero ball. Blakeney has the tools to burst onto the NBA scene in time, but Nike Academy proved that he has quite a bit of seasoning to do in terms of his feel for the game.

The only incoming freshman at the camp, Blakeney was a bit of a ball-stopper at times, electing to back the ball out and isolate rather than swing the rock and keep the offense flowing. There's no question that the talent is there with Blakeney. He's an explosive guard who can play above the rim with ease, and create a shot at the end of a shot clock with his ability to create separation and make shots off the bounce.

Blakeney will undoubtedly have a handful of highlight dunks and big-time shots for the Tigers next season, but for him to fully be able to maximize his potential Blakeney will have to improve his shot selection and overall basketball acumen. The Orlando, FL native also struggled to make shots consistently, an area of emphasis moving forward. As a 6' 4.5 scoring two-guard, transitioning from the AAU circuit to the college game and grooming his combo guard skills will be important for Blakeney's eventual draft stock.

Valentine separated himself as one of the best pure passers at the camp, showcasing excellent court vision and overall feel for the game. The Michigan State standout is very comfortable as the primary ball handler and distributor, despite his struggles beating his man off the bounce consistently. Valentine moves the ball, can play pick and roll, and sees plays developing a step ahead of almost every other wing at the camp.

Valentine certainly isn't perfect with the ball, as he will oftentimes try and thread the needle or get a bit sloppy making the simple play, but as an overall basketball player and distributor there's a lot to like about the Lansing, MI native. He's crafty, plays at different speeds, and knows how to use his body in tight spaces.

But while his passing most certainly impressed, Valentine didn't shoot the ball all that well overall, an area where he'll need to be nearly knockdown to make it in the NBA given his body type and limitations as a finisher and shot creator. Valentine can most certainly make shots (41.6% from three as a junior with natural touch) but he doesn't have the most natural stroke as he has some slight, unnecessary movement in his mechanics and doesn't have a very consistent release point.

Valentine also has his struggles defending quicker guards, one of the biggest reasons he may end up on the outside looking in as an NBA prospect. As a pure basketball player Valentine brings a lot to the table offensively, but he'll have to work on his body and really become a knockdown shooter to make it in the NBA. Valentine's skill set is very well suited for the Europe, where he'll most definitely have the opportunity to turn in a long and successful career if things don't work out for him on this side of the ocean first.
Read Next...