Roundup: Gallinari is Back 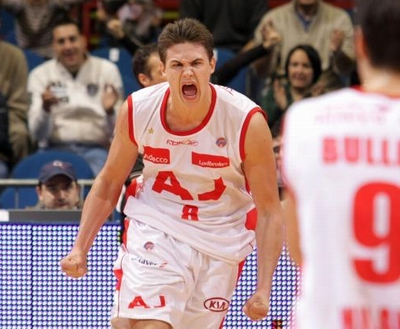 Luis Fernández
@DraftExpress
Although Nikola Pekovic should have probably monopolized our Player of the Week award for the third consecutive time, we instead opted to pick Danilo Gallinari, recently back after a minor injury, who delivered a couple of extremely solid performances both in the Euroleague and Italian championship. He shares the spotlight with Vitor Faverani, who showed his good face this past weekend.

Player of the Week: Danilo Gallinari

With Armani Jeans Milano struggling badly (firing their coach, GM , and hiring a new point guard) the team has embraced Gallinari as a hope for some visible improvement ever since he returned from his injury a week ago. Despite this weekends victory against Cimberio Varese, we cant say theres still much change in the direction of the team: still winless in the Euroleague, they have only been able to collect victories against the three worst placed teams in the domestic competition, and all three came at home. Not the happiest times for the former European champions.

Anyway, its still remarkable that a 19-year-old kid becomes the leader of a Euroleague squad. Danilo had 18 points, 7 rebounds and 3 steals against Unicaja in the Euroleague, and went for 16 points, 6 rebounds and 6 steals against Varese in the Italian Lega. Were not talking about a guy who randomly gets points in the flow of the game, but a player who actively takes decisions on the court. Not surprising since Gallinari is arguably the best one-on-one player on the team. As we could see against Unicaja, he repeatedly attacked his opponents off the dribble. Its a combination of his excellent ball-handling skills with both hands, great use of his body, terrific footwork, and very nice ability to finish around the rim with difficult layups. He delivered the play of the game with a wonderful coast-to-coast play, dribbling in traffic and finishing with a left-handed lay-up. With his team trailing in the last quarter, he went as far as to demand the ball and take it up-court himself.

2696[c]Photo: Armani Jeans Milano[/c]
A pretty decent shooter, Gallinari uses his size advantage and the slashing menace he represents to release his shot even with an opponent in front of him. However, he needs to get more consistent, and indeed he credited a combined 1/11 from behind the arc this past week. Hes also looking pretty straight forward whenever he decides to attack his opponents, in the sense that he looks for the basket himself, usually with excellent results, while passing the ball emerges as a very secondary option. Actually, hes yet to credit a single assist this season after 5 games, and by any means, its not like he cant pass the ball

The amount of steals he collected this past week was really impressive. His length on the wings becomes very annoying for his opponents and pretty helpful for him to reach the ball, while hes pretty smart attacking a players dribble. Still he looked a bit slower than usual in terms of lateral quickness on the defensive end, perhaps as a temporary result of his recent injury and absence from the court. On the other hand, he delivered in the rebounding department, and showed some leaping ability dunking the ball from a standstill position off an offensive capture.

Above anything, he showed character against Unicaja, despite the tough moments his team is going through, fighting throughout the game until he fouled out with a couple of minutes to go. Hes a winner, a player who steps up in the decisive moments.

You never know how Vitor Faverani is going to look in any given game. Fortunately, coming off an increasingly bad run after his promising season start, this weekend he rebounded for a very positive showing against Alicante Costa Blanca in the LEB league. Perhaps not by coincidence, he recovered his place in the starting five for this game. After all, hes very much about momentum and motivation, still not a consistent guy from a mental point of view.

What Faverani brought to this game was aggressiveness and a lot of activity. He repeatedly attacked the rim, trying to take advantage of his wonderful physical conditions. The guy is so long, so greatly mobile, and already pretty strong, that he becomes a headache for any defense whenever he decides to use his gifts up to his potential. Vitor delivered three powerful dunks: the first one, after a pick and roll play, a situation where he feels extremely comfortable; the second, just rising up from a standstill position for a one-handed dunk after receiving the ball in the paint, and you can bet he managed to put the ball way above the rim; while the final one happened after he received the ball just in front of the basket on the three-point line, and as nobody came to cover him, he just took a few steps and smashed the ball with his right hand in spectacular fashion.

Faverani kept attacking the rim all the game long, drawing fouls and sometimes scoring off contact for and-one plays. He also had a very nice finish with his left hand, showing soft touch also with his off-hand. In some other game you would see him killing the opponent team from the low post or the mid-range distance, but this wasnt the occasion. There were no low post situations for him to play one on one, and barely any shooting from range. He only once went for an off-the-dribble mid range jumper--in a very complicated move that didnt work, but looked pretty decent-- as the shot clock was running out.

The overall activity he displayed was obvious in the rebounding department, managing to grab 13 captures (to go along with 15 points), 5 of them off the opponent glass. Vitor worried more than usual about boxing out his opponents, and was always ready to pursue the ball on the offensive end, eventually being pretty effective just by tipping the ball to a teammate. Also looking more solid on defense, he still overreacts in some situations, such as fakes or defensive helps. Indeed, he was fouled out after 16 minutes of playing time according to the official stats, although it looked more like 20 minutes at least. Anyway, he particularly shined in the three times that the opposing players challenged his lateral quickness from the perimeter. And one of the highlights of the game was a terrific dunk he had on Henk Norel.

Anyway, if we have learned anything about Faverani, it is not to get carried away by his good performances. Chances are he will struggle soon, and a lot. However, whenever (and if) he figures out how to stay consistent, the guy is going to be really good.

Nikola Pekovic isnt slowing his incredible production in the Euroleague down one bit. Playing against the current champion Panathinaikos, he had 28 points and 10 rebounds for Partizan Igokea, scoring some clutch points, being literally unstoppable near the rim (he did all his damage within a few feet from the basket), tearing his defenders apart from the low post (he perfectly used both hands to finish, even with jump-hooks) and in second chance options after offensive rebounds. Hardly anybody can match his combination of size, strength and mobility, and even a strong guy such as Mike Batiste was outpowered down low by the Balkan bull. Pekovic now leads the Euroleague efficiency ranking by a ridiculous margin (34.67 for him, 26.33 for the next player), also ranking first in points (26.7) and field goal accuracy (79.5%), while he settles for the third position in offensive rebounds (4.7).

Tadija Dragicevic delivered a monster week for Red Star. He opened his ULEB Cup participation with 28 points and 6 rebounds in the victory against CEZ Nymburk. Over the weekend, he went for 26 points, 7 rebounds and 2 steals against Zagreb. In the Adriatic League, Dragicevic ranks first in points (21.3), second in efficiency, and third in three-point accuracy (47.5%). He might not be the most NBA-friendly prospect, but hes surely going to receive some lucrative job offers in Europe.

Ricky Rubio had a career high 20 points in the victory against Ricoh Manresa, adding also 2 rebounds, 2 assists and 4 steals. Again he looked very incisive, attacking the opposing defense with his superb slashing ability. Rubio has scored in double digits in each of the 7 games played so far in the ACB League, and actually ranks ninth in points (14.1), first in steals (2.9) and seventh in efficiency rating. Meanwhile, his team DKV Joventut tops the ACB ladder.

Omer Asik is a 1986-born big man who is making some noise this season in the Turkish League. Playing for Alpella (his rights belong to Fenerbahce-Ulker), hes averaging 14.5 points, 10.5 rebounds and 2.3 blocks, ranking first in blocked shots and third in rebounds. He had one of his best games this past weekend in the victory against TTNet Beykoz, scoring 17 points, grabbing 14 rebounds and dishing out 3 assists. A guy to keep under the radar.

Rodrigue Beaubois still hasnt been able to find his niche in Cholet. Receiving little playing time, he didnt even hit the court this past weekend. As you will remember, he was another example of a prospect coming virtually out of nowhere around draft time. As often happens with those players, his transition to a competitive setting is going slower than what might have been expected.
Read Next...