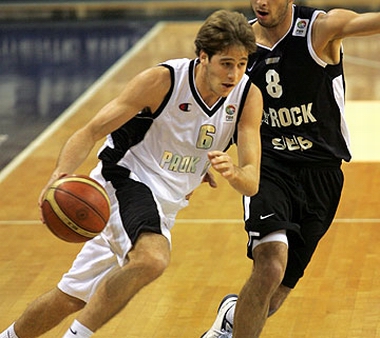 It had to happen sooner or later. With severe financial struggles, PAOK had been unable to retain its best players for several years now, and went into this season with a pretty weak squad. The historic Greek team was only able to collect a lone victory during the first eight games of the domestic leagues regular season. Thats why the last two consecutive victories have been so crucial, and why Dimitris Verginis leadership in those two games have a very special meaning. Thats why hes our Player of the Week.

Anyway, hes hardly NBA material at all. Hes not greatly athletic, he doesnt enjoy crazy size or length as his countrymen Diamantidis or Papaloukas, his defense looks rather average at best, hes not the best distributor around, and hes not a great scoring threat in traffic (his 40% average on 2-point field goal attempts is rather disappointing). Still, he can emerge as a very decent heir of the outstanding guard crop that the Hellenic country currently enjoys.

Moving away from Slovenia to land in a Euroleague team was a risky move by Emir Preldzic, as he was still a relatively underdeveloped player, particularly in the physical department. However, in Fenerbahce, under the guidance of a youth-friendly coach in Bojan Tanjevic, he has been granted regular playing time while he matures and adjusts to a superior level of competition. Indeed, his season had gone pretty unnoticed, right until this past week, when he has delivered back-to-back remarkable performances for his team. In a very easy game against TTNet Beykoz, he had 17 points, 2 assists and 2 steals, while going for 18 points, 2 rebounds and 2 assists in the important victory against one of the top domestic teams, Turk Telekom.

Its become very obvious that Preldzics intrigue revolves around his combination of length and skills. Hes a 6-9 small forward, although still rather skinny and just about a decent athlete. His lack of physical build is pushing his game out to the three-point line, from which he shows two very different faces: a 14.3% shooter in the Euroleague, and a 47.8% sniper in the Turkish championship. All in all, even if hes still not greatly consistent, he has the manners of a solid shooter for the near future, showcasing very fluid mechanics in his usually spot-up attempts.

2801
In a team like Fenerbahce, with no clear-cut point guards, Preldzic can eventually officiate as a point forward, as hes a fundamentally sound player with nice court awareness who evolves with certain flair on the court. Preldzic can drive the ball, looking particularly comfortable in the open court, where he can easily execute direction changes that show a very nice body control. Its not as easy for him in the set offense; hes a nice ball-handler, but without the physical strength to contain his opponents and without some explosiveness to light them up, he cant fully trust his dribbling ability, especially with his left hand. Indeed, even if he can put the ball on the floor with both hands to attack his match-up, he struggles to get rid of them unless he enjoys a previous advantage. Anyway, hes an able kick-out passer, although he sometimes hesitates, which might lead him to mistakes.

On defense, hes not greatly quick in with his lateral movement, but he makes up for that with his length, which often prevents his opponents from attacking him by itself, and nice activity. His rebounding is still improvable, as his lack of bulk severely slows him down in this department. Generally speaking, its likely that Preldzic will improve at a similar rate that his body develops physically. He will then be able to execute certain things that he struggles with right now. His frame is not particularly great, but he should be able to add some decent weight. NBA-wise, his size makes him attractive, but given his lack of elite athleticism and strength, he will need to show something more before drawing real interest from the American pros. Still, the potential is there, and hes a pretty intriguing guy.

Danilo Gallinari extended to four his streak of games with 20+ points in the Italian league last week, delivering 22 to go along with 6 rebounds, 3 assists and 4 steals in the loss against Air Avelino, although he cut the run during the weekend in the victory against Upim Bologna, where he settled for 13 points, 5 rebounds and 2 assists. Hes averaging 16.3 points, just enough to make the cut in the top-10 scoring rank of the Italian league.

Ricky Rubio joined forces with Rudy Fernández and Eduardo Hernández-Sonseca to roll over Unicaja Málaga in the ACB League. They three alone combined to reach the 100-efficiency-point mark. Rubio in particular had 16 points, 5 rebounds, 6 assists and 4 steals in a superb all-around performance. All three rank in the top-8 in efficiency in the Spanish championship.

Jonas Jerebko had a season-high 17 points to go along with 8 rebounds and 3 assists, which is easily his best performance in high-level European competition. The Swedish small forward is regularly starting for the second ranked team in the Italian League, Angelico Biella.

Omri Casspi still hasnt been able to establish himself in Maccabis rotation this season, despite the solid previous campaign he had delivered with Galil Elyon. The talented forward is struggling to get anything more than a few meaningless minutes in the Euroleague, and hes neither making up for it with his Israeli League showings. He hasnt been able to score in double digits in the domestic championship since November, and with Maccabi surprisingly struggling in its own country (losing in unprecedented fashion to lowly Ramat Gan by 18 points last game), its not likely that he will receive many minutes anytime soon. To make things worse, Haaretz.com published an embarrassing story a few days ago about Omris parents heavily pushing coach Oded Katash for more playing time for their son, accusing the coach of being jealousy of Caspi. Indeed they want their son loaned somewhere if he doesnt get those minutes on court, but Maccabis management doesnt seem to happy with the idea. Casspis contract runs out in 2009 and it doesnt seem one of Maccabis priorities to help the player developments development at any cost if they are going to lose him for nothing.

Katash, by the way, resigned this week after the debacle losing to Ramat Gan.

Daniel Clark has been loaned by MMT Estudiantes to Leche Río Breogán. The English center wasnt enjoying much playing time in the very demanding ACB League, especially since his team is struggling to get out of the relegation zone and are obviously prioritizing results over the development of their youngsters. Clark will still see a nice playing level with Breogán in the strong LEB Oro (Spanish second division), and hopefully will be trusted with consistent playing time.
Read Next...