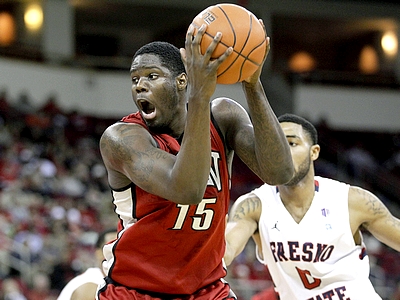 -Anthony Bennett headlines an impressive class of power forwards, the top of which looks terrific on paper across the board.

Looking at the bigger picture, Bennett's 14.4 possessions per-game and 1.07 points per-possession (PPP) both rank well above average and are eerily similar to the marks posted by Cody Zeller and Kelly Olynyk despite the relative differences in their skill sets and physical profiles. Ranking in the top-four in both transition and half court scoring efficiency, Bennett's athleticism and shooting ability shine through in this study.

Not standing out in usage in any one playtype, Bennett did a little bit of everything for UNLV. He scored an average 0.89 points per-possession in the post, but an impressive 1.39 PPP as a finisher at the rim, the second best mark among his peers and the byproduct of his above average efficiency scoring on put backs and cuts.

In addition to the efficiency his athleticism afforded him around the basket, Bennett also proves to be a potent jump shooter on paper. Ranking fifth in this group with 3.5 jump shot attempts per-game and fourth scoring 1.06 points per-jump shot, Bennett has uncommon scoring ability from the perimeter for player with his physical gifts.

Bennett doesn't have too many weaknesses on paper situationally aside from his lack of prolific scoring ability one-on-one and in the post. It will be interesting to see if he can translate his efficiency to the next level and become a more dynamic threat creating for himself in the paint or facing up from the midrange in the coming seasons.

-Cody Zeller was maligned at times for his lack of great progress this season, but nonetheless looks the part of a high-level prospect on paper. He used 14.9 possessions per-game while scoring 1.06 points per-possession, both well-above average marks only marginally different than those posted by Anthony Bennett.

Unlike Bennett though, Zeller stands out in a few very specific areas. Drawing free throws on an impressive 25.7% of his possessions, Zeller got to the line at a better rate than any high usage player in this group, by a fairly large margin. He also got out in transition for 13.9% of his possessions, the third most among players in this group, and converted at a near 80% rate on the break, also good for third. These two things helped him compensate for his below average 43% shooting in the post and only slightly above average 60.9% shooting as a finisher.

Zeller's main weakness on paper besides his finishing ability inside the paint is his limited jump shooting prowess. Attempting the second fewest jumpers per-game in this group at just 0.7 per-game, he knocked down an average 37.5% of that limited number of tries.

-Kelly Olynyk's breakout season definitely stands out on paper. His 1.13 points per-possession is the highest in this group while his 15 possessions per-game also place him in the top-five power forward prospects in usage.

Unlike Bennett and Zeller, Olynyk did his best work compared to the rest of the field in the half court, where his 1.10 PPP is one of the top marks among all players eligible for the 2013 draft. He ranks in the top two in scoring efficiency on cuts and as the roll man on the pick and roll, in addition to converting a top-ranked 58.3% of his shot attempts in the post and 70% as a finisher at the rim.

An exceptionally skilled player for his size, Olynyk's 1.6 jump shot attempts per-game doesn't jump off the page, and ranks below the average number of tries, but he scored a very respectable 0.96 PPP when he did fire away from the perimeter. Though he is not the athlete Bennett or Zeller are, his skill level allowed him to outperform them at the college level in terms of scoring efficiency. A fairly unique player, Olynyk will be one of the more interesting cases from this draft class to track on paper as a rookie given his rare and exceptional profile.

-This study is not kind to Tony Mitchell, who ranks second to last in scoring efficiency thanks in large part to his high 18.1% turnover rate and 40.3% shooting in the half court. Attempting more jump shots than nearly any player on this list at 4.1 per-game, Mitchell knocked down his perimeter attempts at a well below average 28% clip. Scoring at a 63% rate in the post in 2012, Mitchell shot just 49% on the block this season. Ranking as a below average finisher as well despite his outstanding physical tools, Mitchell's situational profile reflects the challenges he faced in returning to North Texas and the improvements he'll need to make to reach his potential on the offensive end at the next level.

-C.J. Leslie ranks as the third highest usage player in this group at 16.6 possessions per-game, but ranks third last in scoring efficiency at 0.91 PPP. He got out in transition and operated one-on-one more than any other power forward prospects on 15.9% and 17.4% of his total possessions respectively. Ranking slightly below average in scoring efficiency as a finisher and jump shooter, Leslie is a long, athletic forward who figures to have some potential at the three and four depending on how his skill level develops in the coming years.

-Joffrey Lauvergne turned his season around after landing in Partizan. Starting the year with Chalon and playing with Valencia in Spain for a time, the French power forward impresses on paper. His 58.1% shooting in the post and 69.1% shooting as a finisher rank second among this group of prospects, and although he ranks last in this group in overall usage at just 7.9 possessions per-game, he proved to be an opportunistic scorer on the interior after landing in Serbia. He also ranks second in transition scoring, showing very nice versatility that NBA teams might want to take a closer look at in private workout settings.

-Brandon Davies and Jackie Carmichael rank first and second in this group in usage at 17.5 and 17.1 possessions used per-game, scoring a slightly below average 0.98 points per-possession. No prospect in this draft posted up as often as the pair, both of whom rank slightly below average in efficiency due to just how often they were asked to create this own shot on the block per-game. Carmichael is the better finisher, scoring 1.39 points per-shot around the rim last season, but Davies edges him in the post, scoring 0.95 PPP to Carmichael's 0.90 over a remarkable 9.7 possessions with his back to the basket per-game.

-Richard Howell and Trevor Mbakwe are the bullies of this group, seeing nearly a quarter of their total possessions on put backs from offensive rebounds. Both rank as less than prolific jump shooters but slightly above average finishers despite their lack of great size, but provide clear value with their ability to bang in the paint and generate extra possessions on the offensive end.

-Erik Murphy, Ryan Kelly, and Kenny Kadji represent the truest stretch fours in this year's draft. With nearly 30% of their possessions coming as spot-up shooters, each ranks in the top-5 players in this group in points per-jump shot. As finishers, Kadji is the only one of the three who ranks better than average, scoring a respectable 1.34 PPP around the rim.
Read Next...