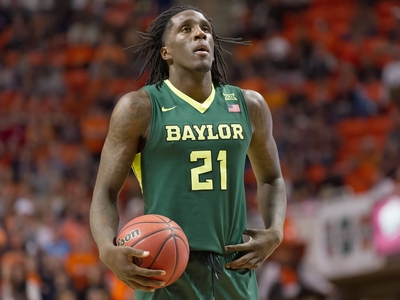 Taurean Prince (full name: Taurean Waller-Prince) was a completely unheralded high school recruit, originally signing a letter of intent to attend LIU-Brooklyn (in the NEC) before a coaching change enabled him to revisit his choices. He grew 11 inches in high school, going from being a 5'8 point guard to a 6'7 center, and was always young for his class, as he easily could be a junior, being the same age as many players from that class that will be drafted this June. Prince didn't play much as a freshman at Baylor, seeing only 6 minutes per game while sitting out a number of contests, and was not a major contributor as a sophomore either, at 14 minutes per game.

It wasn't until his senior year that Prince became a full-time starter at Baylor, even if he was clearly one of the most productive sixth men in the country as a junior, and was already drawing significant NBA attention following an excellent summer where he competed for USA Basketball in the Pan-Am Games last August. For his career, Prince averaged over 20 points per-40 minutes, while shooting 38% from beyond the arc, with 8.5 rebounds, 1.9 steals and 1 block thrown in for good measure.

Prince has ideal physical tools for the role he's projected to play in the NBA, standing nearly 6'8 with a solid 6'11 ½ wingspan. He has a strong, mature frame that he's not afraid to use, and is a good athlete, being mobile, fluid and highly capable of playing above the rim.

Prince is a capable outside shooter, hitting a solid 131/348 (38%) attempts for his college career. He does a good job of spacing the floor and has a compact and repeatable stroke that should translate nicely to NBA distances. He also shows some potential as an off the dribble shooter, or even coming off screens, so it's possible he can continue to improve his versatility from the perimeter as his career moves on, as he's already made huge strides in the past few years.

With that said, Prince is far from a one-dimensional spot-up shooter at this stage. He does a great job handling the ball or finishing in transition, can punish smaller or equally sized players in the post, is intelligent moving off the ball, and will attack defenders off the dribble nicely in a straight-line in closeout situations.

His versatility is especially evident in the work he does defensively. He is big and strong enough to not get backed down by most power forwards in smaller lineups, but is also quick enough to stay in front of most perimeter players at the same time. He covers ground extremely well, and his long arms, high activity level, competitive spirit and strong instincts make him a playmaker getting in the passing lanes, and coming up with steals, blocks and rebounds.

While Baylor played quite a bit of zone, which made it challenging at times to get an accurate read on his full potential as a man to man defender, it's easy to project him as being the type of guy you can switch on every ball screen, which is all the rage in basketball these days.

On the downside, Prince is better playing a more confined and narrowly tailored role, as he demonstrated earlier in his career. Baylor's inconsistent guard play this season led to Prince being forced to shoulder more ball-handling and playmaking responsibilities, which contributed to his 2P% dropping from 53% to 47%, and his 3P% from 40% to 36%.

Prince is not a great ball-handler or overall shot-creator, as he struggles to get low to the ground and will not execute fancy moves or change gears explosively to get into the paint and create a high percentage shot. His first step is just average, and he is not one to rise up for high-flying dunks in traffic in the half-court. He didn't always seem to realize that this season, though, as he showed a tendency to get somewhat wild at times, settling for tough shots, and turning the ball over at a higher rate than you might hope.

While unlikely to develop into a star or a go-to guy, every NBA team these days needs at least one player like Taurean Prince on their roster. It's very easy to see to project him into a (highly coveted) tailor-made role in today's NBA, and he looks ready both physically and skill-wise to step in and contribute fairly early on. The fact that he's only 21 means there might be some more potential still left to tap into, particularly when surrounded by better players, where he isn't asked to do as much as he was for Baylor at times this season.More DX Scouting Reports and Video Breakdowns:
-Michigan State's Denzel Valentine
-UNLV's Stephen Zimmerman
-Marquette's Henry Ellenson
-LSU's Ben Simmons
-Michigan's Caris LeVert
-Louisville's Damion Lee
-Florida State's Malik Beasley
-Florida's Dorian Finney-Smith
-Cibona's Ante Zizic
-Estudiantes' Juan Hernangomez
-Oakland's Kay Felder
Read Next...