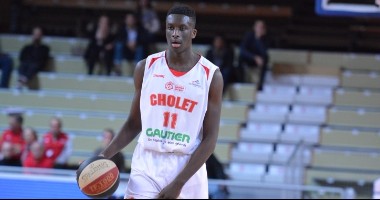 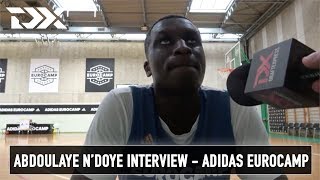 Mike Schmitz
@Mike_Schmitz
After his strong performance yesterday, Abdoulaye N'Doye earned a bit of buzz once again measuring 6'6.5 in shoes with a tremendous 7'2 wingspan and a sturdy 198-pound frame. Playing primarily point guard at this point in his career, N'Doye is the longest and among the tallest point guards or combo guards we have measurements for in our massive database.  It is no wonder N'Doye is such a menace defensively given his freakish wingspan-to-height ratio is right on par with that of Kawhi Leonard. Here's an interview we conducted with N'Doye yesterday, after his very strong day one performance.

Mike Schmitz
@Mike_Schmitz
One of the lone European players to find their footing in the first game, oversized French point guard Abdoulaye N'Doye scored 8 points while coming up with 3 rebounds, 3 assists, and 3 steals in only 21 minutes.

Much improved from the last setting we evaluated him in at the U18 European Championship in Samsun, N'Doye's skill-set and feel for the game appear to be making major strides. He used both sides of the floor, showed the ability to change speeds patiently and read the help-side defense, and was constantly probing with his dribble looking to get others involved.

The clear-cut best defender here among the European prospects, N'Doye showed the ability to lock down anywhere from the 1-3 positions, completely locking down heralded NBA prospect Arnoldas Kulboka (who stands 6'9) with suffocating ball-pressure thanks to his long arms, quick feet and chiseled frame. N'Doye measured exceptionally well at 6'5 1/2 without shoes, with a massive 7'2 wingspan that may even allow him to even defend some big men as his strong 198 pound frame fills out.

N'Doye did a nice job of introducing himself to the many NBA executives who were watching him here for the first time, and will continue to get long looks as the camp moves on. With incumbent point guard Frank Ntilikina certain to miss the U19 World Championship in Cairo later this month, N'Doye has a major opportunity to continue to build his NBA draft stock with the French national team riding high after winning the U18 European Championship in December.

The biggest question marks surrounding N'Doye revolve around his ability to put the ball in the basket, something that is a major necessity from the guard spots in today's NBA. His perimeter jump-shot is still a major work in progress, and is likely the key to him unlocking his potential as a prospect. N'Doye mentioned to us in an interview today that he's heading to the US this summer to train in Dallas with Tyler Relph and work with the rest of his Comsport agency's highly touted group of clients, including Sekou Doumbouya.

Weaknesses:
-Limited skill-level offensively. Only scored 21 points in 115 minutes at the U18s (~7 per-4o)
-Relies heavily on his strength to create offense by overpowering weaker defenders
-Average ball-handler. Doesn't want to drive left. Struggles to execute complex moves and create efficient half-court offense for himself and others
-Very limited outside shooter. Shot just ¼ for 3 at U18s. 8/25 (32%) for season in French junior league.
-Career 55% free throw shooter in 70 DX database games doesn't raise optomism for his ability to improve his jump-shot
-Feel for the game is a work in progress

Outlook: Played a DeAndre Liggins type role for France off the bench, bringing tremendous energy and defensive versatility. Extremely limited offensively at this stage. Not clear how much he can improve in that aspect. Will get NBA looks solely off his defensive prowess, but would benefit greatly from becoming at least a capable shooter with his feet set, or a more polished ball-handler.
Read full article