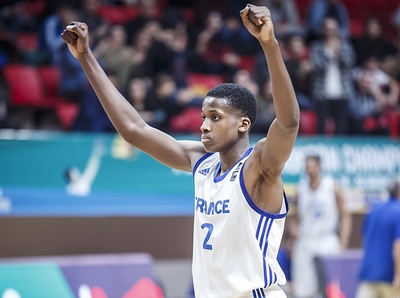 Strengths:
-Strong physical tools for a point guard at 6'5 (possibly without shoes)
-Frame continues to fill out
-Has exceptional length
-Smooth athlete who can operate at different speeds
-Unselfish player who thinks the game at a high level
-Excellent court vision, particularly in the pick and roll, where he's capable of making complex reads and delivering the ball decisively and accurately in tight spaces for easy baskets.
-Plays the game with impressive confidence and poise.
-Significantly improved perimeter shooter, with feet set and especially off the bounce. Made shots at a very high rate all tournament long, with impressive volume, degree of difficulty and confidence. Has good touch, which lends itself to his ability to finish off the glass and convert from the free throw line.
-Made 17/29 3-pointers at the U18s and 12/13 FTs. Now 33/64 (52%) for 3 on the season in 27 games.
-Lockdown, multi-positional defender. Outstanding lateral quickness, footwork, timing, length and smarts allows him to smother opponents on the perimeter. Switches seamlessly between all three backcourt positions.
-Makes plays defensively on and off the ball. Reads the floor, knows the scouting report and where to position himself to rotate and help, far better than your average 18-year old.

Weaknesses:
-Lacks a degree of quickness from a stand-still, making it difficult for him to emerge as a high-volume, take-over, one on one player who can create something out of nothing with the clock running down in the half-court.
-More smooth and pacey than powerful or explosive. Not going to rise up in a crowd and finish over defenders in traffic, making it difficult for him to finish everything he creates inside the paint at times. Can improve his ability to use his off hand for finishes.
-Quiet guy who projects as more of a secondary option who excels playing off another elite-level shot-creator. Can get a bit passive or overly unselfish at times. Not exactly a take-over type mentality wise, even though he was forced to be that for France during this tournament. Better utilized as a versatile and intelligent piece alongside other good players rather than the hero who saves the day every time.
-Ball-handling skills can continue to be tightened. Was bothered at times by intense ball-pressure as his dribble is somewhat high and loose. 4.8 turnovers per-40 at U18s

Outlook: Forced to attend this tournament under threat of suspension by the French Federation, Ntilikina got off to somewhat of a slow start, undoubtedly in no small part due to the fact that he was extremely under the weather. In fact, he was taken to the hospital for blood tests in France's day off between the third and fourth (quarterfinal) game, as his flu symptoms were not improving. He was absolutely sensational in the knockout rounds, proving to be by far the best player on the court and at the tournament and making quite a few huge plays to help his team eventually win the Championship. His shot-making prowess in particular was a revelation, something that was considered somewhat of a weakness going into the year. Despite the sparse attendance of NBA executives in Turkey, Ntilikina certainly helped himself considerably at this tournament.

Likely still has plenty of room to improve athletically as his frame matures and he has NBA coaches and strength and conditioning staff in place to help him maximize his tools. Lower body in particular could get stronger, which may help him become more explosive. Defense, perimeter shooting and basketball IQ gives him tremendous versatility in today's NBA, allowing him to be utilized in many different roles and alongside all kinds of different teammates and lineup configurations.

Weaknesses:
-Limited skill-level offensively. Only scored 21 points in 115 minutes at the U18s (~7 per-4o)
-Relies heavily on his strength to create offense by overpowering weaker defenders
-Average ball-handler. Doesn't want to drive left. Struggles to execute complex moves and create efficient half-court offense for himself and others
-Very limited outside shooter. Shot just ¼ for 3 at U18s. 8/25 (32%) for season in French junior league.
-Career 55% free throw shooter in 70 DX database games doesn't raise optomism for his ability to improve his jump-shot
-Feel for the game is a work in progress

Outlook: Played a DeAndre Liggins type role for France off the bench, bringing tremendous energy and defensive versatility. Extremely limited offensively at this stage. Not clear how much he can improve in that aspect. Will get NBA looks solely off his defensive prowess, but would benefit greatly from becoming at least a capable shooter with his feet set, or a more polished ball-handler.

Strengths:
-Strong physical profile for a combo guard
-Chiseled frame
-Long arms
-Very good defender. Moves his feet on the perimeter and stays in front of opponents impressively. Gets in passing lanes frequently.
-Terrific rebounder from guard spot. 8.8 per-40 at U18s
-Strong first step in a straight line. Puts pressure on the defense with his quickness and draws fouls
-Inconsistent, but not a hopeless shooter. Made spot-up jumpers at an acceptable rate in Turkey. Not bad when he can step into his jumper in rhythm. Also made a handful of pull-ups that looked good coming out of his hand.
-Unselfish, competitive player who knows who he is and was more than willing to do his job at U18s.

Weaknesses:
-More of a 2-guard than a point at this stage. Negative (near 1/1) assist to turnover ratio in 114 games in DX database. Feel for the game is a work in progress. Not a creative or instinctive passer. Doesn't see the floor at a high level.
-Jumper looked encouraging at times (7/16 for 3 in U18s), but has struggled to make shots consistently throughout his career. 78/273 (28.5%) in 114 games in DX database. 67% career FT%. Mechanics waver under duress. Doesn't always shoot it the same way every time. Guides the ball on his release at times
-Not very efficient inside the arc either. Career 48% 2-point percentage. Very right hand dominant.

Outlook: Athletic combo guard still figuring out how to maximize his tools. Polish, feel a work in progress. Gives you quite a bit defensively and as a rebounder, and showed some flashes at times of being able to develop his jump-shot and move the ball unselfishly. Has great tools for either guard spot if he can improve in those areas, but is in desperate need of good coaching.
Read Next...